Hidden Figures flows nicely and tells a heartwarming story about perseverance and triumph in the face of adversity. 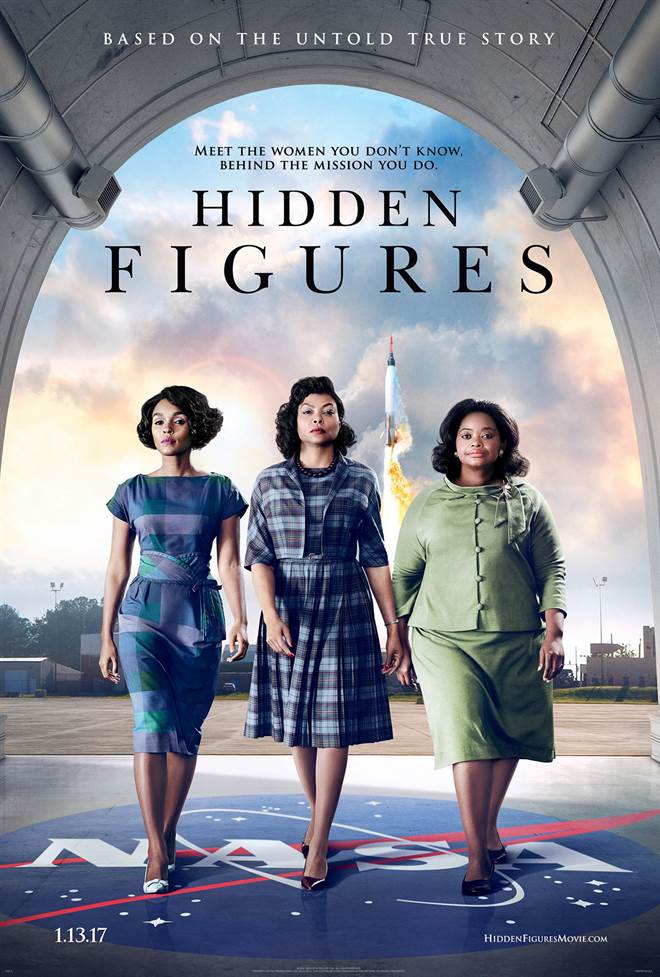 Purchase   DVD/Blu-ray/4K UHD
It's not easy being smart.  It's even harder being smart and being a female.  It was very hard being smart and being a female in 1961, but it was awful being smart, female and Negro in 1961.  However, Katherine Goble- Johnson (Taraji Henson; Empire), Dorothy Vaughan (Octavia Spencer; The Help) and Mary Jackson (Janelle Monae; Moonlight) managed to somehow look past the racism and hatred much of the time and simply do their jobs at NASA. Hidden Figures tells their stories.

As the space race began heating up around the world, NASA employed some of the most brilliant minds in the country.  Unfortunately, those minds often got overlooked because they were inside the heads of black females.  These women could often times do more than the white males who had positions of power but because of the nature of segregation in this country they could do no more than compute numbers as a member of the equivalent to the "steno pool".

Katherine was a brilliant mathematician sent to work with Al Harrison (Kevin Costner; Field of Dreams) and the Space Task Force.  Relegated to checking the calculations, she encountered outward hatred from many of the men she dealt with especially lead Mathematician Paul Stafford (Jim Parsons; Big Bang Theory).  However, over time, Harrison realized that she was probably the smartest person in the room and without saying a word let his team know there was no room for racism in their job.

Mary had the mind of an engineer and, encouraged by her supervisor, she petitioned the courts to take night classes at the all-white schoolhouse in order to earn her credentials and become part of NASA's Engineer training program.  Dorothy, upon seeing the new IBM computer being installed and realizing all their jobs may soon be obsolete, took it upon herself to learn the programming language so she could teach her team and they could be ready to program when NASA finally got the machine up and running (which she helped to do). These women broke down barriers in order to survive and do what they loved.

Spencer is masterful.  She is the calm within the storm hidden deep down inside.  Henson is terrific as the mild-mannered Katherine who manages to show up everyone in the room.  When she explodes on Harrison she is brilliant.  I didn't even realize Henson was playing Katherine, as she is a much different character from Cookie Lyon in Empire.   Monae does a great job as the outspoken, flirtatious Jackson.  Parsons and Costner play roles that we have seen from them before but at least this time when Parsons is being nasty and insulting,  he is aware he is doing so.

Hidden figures is a powerful movie about an embarrassing time in our history as seen through the eyes of three Negro women and, while based on a true story, unfortunately, I'm sure much of the real anger and violence has been glossed over.   I'm sure these women and others like them had to fight much harder and endure much more than this movie lets on, simply because it not only had to tell their stories but NASA's as well.  However, in doing so, Writer/Director Theodore Melfi (St. Vincent) manages to make a tumultuous time almost somewhat "sweet" with a little bit of "sour" thrown in.

Hidden Figures flows nicely and tells a heartwarming story about perseverance and triumph in the face of adversity, both for those women and NASA's space program.  At the end, it was nice to see the outcomes of these pioneering and brilliant women's lives as well as photos of the real life ladies.  Their contributions were plentiful and they deserve their place in NASA history as well as the honors bestowed upon them.

The film is enjoyable and entertaining and worthy bringing the family to see during this holiday season.

Jennifer Broderick
Hidden Figures is the movie everyone should watch. It educates us and entertains us at the same time.  It puts the civil rights movement and segregation in a perspective that most of us have only read about in history books.
Full Review | Grade: A