The overall feel (The Smurfs: The Lost Village) is a throwback to those days back in the 1980's when I could grab some cereal and watch tv while the rest of the house was still sleeping. 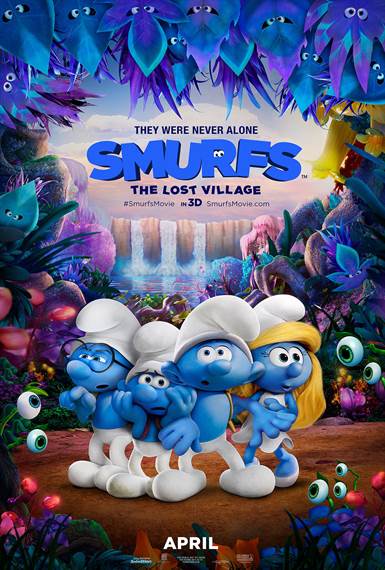 Purchase   DVD/Blu-ray/4K UHD
In 2011, The Smurfs got the "live action" treatment followed by a sequel in 2013.  Both starred Neil Patrick Harris (How I Met Your Mother) and Hank Azaria (The Simpsons).  While they were hugely successful, they didn't have the same feel as the 1980's Saturday morning cartoon we all knew and loved.  Luckily, Sony Animation has remedied that with this week's Smurfs: The Lost Village, and fans can once again relive their childhood watching those lovable blue creatures in all their cartoon splendor.

Every Smurf has their "niche".  Brainy (Danny Pudi; Community) is really smart, Jokey (Gabriel Iglesias; Magic Mike XXL) is good a pulling a fast one, and clumsy (Jack McBrayer; 30 Rock), well... he's just lovable and messes up quite a bit; every Smurf, that is, except for Smurfette (Demi Lovato; Camp Rock).  Having been created from clay by Gargamel (Rainn Wilson; The Office) she technically isn't a "real" Smurf and therefore doesn't seem to have a discernable personality trait.

One day, however, she sees a Smurf in the forest she doesn't know and discovers a whole new village of Smurfs.  She unknowingly alerts Gargamel to this other community and feels she must warn them that he is coming to take them in order to harness their magical powers for himself. As she and Brainy, Clumsy and Hefty (Joe Manganiello; True Blood) set out on a journey to find the "lost" Smurfs, she discovers her own trait that defines who she is forever.

Sony Animation brings the classic cartoon into the new millennium with updated creatures and beautiful scenery.  The colors are so vibrant they pop off the screen and envelope the audience. There are some unique features incorporated into the graphics, including what can only be described as a "cool" river.

While there is a lot that is terrific about Smurfs: The Lost Village the story is rather bland and unoriginal.  Gargamel tries to capture the Smurfs and they manage to foil his plans every time.  In that way, the movie is exactly like those cartoons that kept children entertained for years.

The cast is enjoyable, especially those portraying the Smurfs in the lost village.  Lovato has just the right blend of sweetness and sarcasm to portray Smurfette and she does the character proud.  I must admit, I spent the whole film trying to figure out who was portraying Papa Smurf, as the voice was so familiar to me.  It was no surprise to find out it was Mandy Patinkin (Homeland).  His smooth tones are soothing and authoritative which makes him a perfect choice to Papa.  However, a surprise was in store when I discovered the voice of Smurf Willow, the leader of the lost community, was none other than Julia Roberts (Pretty Woman).  Again, a great casting choice but definitely unexpected.  Unfortunately, I was disappointed with Wilson as Gargamel.  I remember the cartoon wizard having more of an accent, maybe German or Austrian and this one seems to be too "white-washed" for my taste.

The music is fun and, of course, the  Smurfs wouldn't be the Smurfs without a musical number or two.  The overall feel is a throwback to those days back in the 1980's when I could grab some cereal and watch tv while the rest of the house was still sleeping.  In that aspect, the film is much more like the original than the 2011 and 2013 live action movies were, so I enjoyed this one a little more as the nostalgia of a simpler time enveloped me.  However, the story and characters had nothing much to say, making this a glorified version of the cartoon we all know and love.

Download Smurfs: The Lost Village in Digital HD/4K from the iTunes store.