From the cast to the costumes to the music, The Greatest Showman has so much to offer and with a PG rating, it’s the perfect movie to take the whole family to this holiday season. 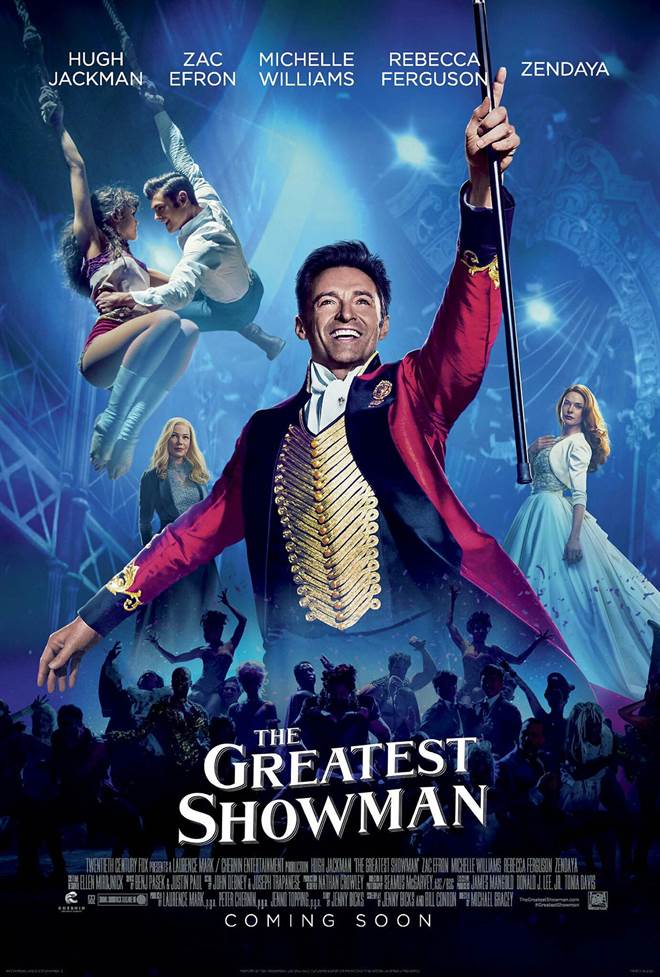 Purchase   DVD/Blu-ray/4K UHD
Some would say Phineas T. Barnum (Hugh Jackman; Logan) was a dreamer. Others would say he was a businessman. Yet, some would argue he was both and some would say he scammed people.  The truth is probably a little of each but there is no denying he was one of the greatest showmen on Earth.  He gained wealth entertaining people but not with the tried and true.  He collected the odd and curious talents that had people coming to see what they were all about.  Critics were unkind and society never accepted him but he still went on entertaining. Twenty Century Fox would argue that he is still entertaining the masses as the new film The Greatest Showman comes to theaters just in time for families to see a movie during the holiday break.

Based loosely on his life, the film shows Barnum's humble beginnings as a poor tailor's son and his gamble that people would want something different.  Borrowing money from the bank with collateral he didn't really have, he gathered performers with abnormalities – the smallest man alive, the bearded lady, etc., and showcased them during his show.  When one critic described it as a circus, Barnum ran with that and changed the name to include the word and, thus, Barnum Circus was born.

Even with growing success, Barnum still lacked the one thing he craved the most – acceptance.  He soon sought out and partnered with promoter and aristocrat Phillip Carlyle (Zac Efron; High School Musical) and while Carlyle brought a little more respectability, joining the Circus did more harm to his reputation than it helped Barnum's.  Regardless, Barnum managed to attract a legitimate singing act, Jenny Lind (Rebecca Ferguson; Mission: Impossible – Rogue Nation) and after touring her all across America, he finally got some of that acceptance he so desired.  In the end though, he could not escape the thing he loved the most…the Circus.

As a musical, this could be hit or miss but in this case, it somehow manages to work.  There are moments that are cheesy for certain but, overall, it is an entertaining story.  The team behind it took a dramatic, somewhat historical tale and gave it the High School Musical treatment.  I fully expected to see Kenny Ortega's (Gilmore Girls) name in the credits and was surprised when I didn't.  However, that isn't to say the movie is bad… because it's not.

The producers and newcomer director Michael Gracey smartly gathered a fantastic cast beginning with Jackman.  Who could pull off the greatest showman other than an amazing showman himself.  Jackman made Barnum likable and larger than life all at the same time.  Ferguson and Michelle Williams (Manchester by the Sea) compliment Jackman beautifully and match his fervor.  Efron is ok, and even though there is something about him that rubs me the wrong way, he was well cast nonetheless.  The real standouts next to Jackman are the circus freaks with special attention paid to Zendaya (Spider-Man: Homecoming) and Keala Settle (Ricki and the Flash).  These ladies are incredible talents and add to the overall feeling of the film.

With a musical, the music and dancing become characters all their own and this film is no exception.  The music is infectious but I would expect no less from the talents of Benj Pasek and Justin Paul, part of the creative minds behind La La Land.  You will walk out of the theater with the songs stuck in your head and humming along.  It's also an interesting juxtaposition between the period costumes and settings and the modern music.  The dancing is also modern and intricate, offering fantastic sequences that are sure to delight audiences.

From the cast to the costumes to the music, The Greatest Showman has so much to offer and with a PG rating, it's the perfect movie to take the whole family to this holiday season.

Purchase a DVD/Blu-ray/4K UHD physical copy of The Greatest Showman today at Amazon.com

Download The Greatest Showman in Digital HD/4K from the iTunes store.

Listen to the The Greatest Showman soundtrack on Apple Music.

For more information about The Greatest Showman visit the FlickDirect Movie Database. This release has been provided to FlickDirect for review purposes. For more reviews by Allison Rose please click here.