Rocketman is one of those films that light up the cinematic universe. It’s a musical, visual, storytelling gem; don’t miss it. 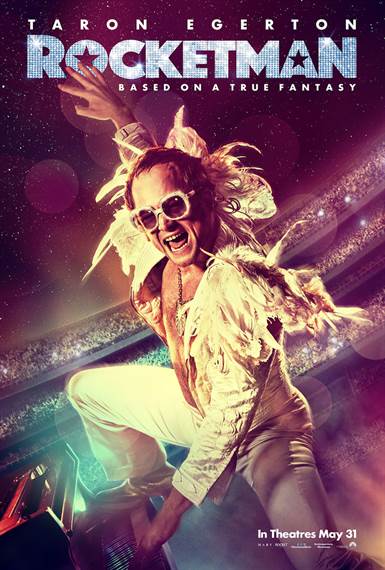 Purchase   DVD/Blu-ray/4K UHD
What can you say about a movie that tries to totally capture the formative years of a ROCK GOD?

A film that covers his childhood (I Guess That's Why They Call It The Blues), his partnership (Daniel), his rise to fame (Honky Cat), his fame (Pinball Wizard), his relationships (Don't Go Breakin' My Heart), his addictions (Crocodile Rock), his fall (Don't let The Sun Go Down On Me), and his eventual rebirth (Circle Of Life); all set to his award-winning music (I'm Still Standing).

If the movie's called ROCKETMAN and it's about the musical genius SIR ELTON JOHN, starring the tremendously talented Taron Egerton you say it's FANTASTIC!

Unless you've been living under a rock you know Elton John's music, but do you know his story? I mean how neglected little Reginald Dwight from the poor side of town rose to become the flamboyant performer he is today. It's a good story made all the better by weaving the music of his life into the fabric of the film.

"Rocketman" is a glammy, sequin-encrusted rock musical biopic of legendary rock star Elton John's (Egerton) early life and breakthrough years. Raised by his emotionless mother Sheila (Howard), his more compassionate grandmother Ivy (Jones), and his cold father Stanley (Mackintosh), who treated him like a hated pet, he took refuge in an innate musical talent he had for the piano. Lessons led to a scholarship at the Royal Academy of Music at age 11, where he started to refine his talents.

Years later, as a young adult, he began performing in a band that played background for a group of American soul singers touring England. He met lyricist Bernie Taupin (Bell) through a twist of fate. They became close friends and would collaborate for the rest of their lives.

Together they begin a rise to the top of the Rock World, where eventually Elton's addictions to sex, drugs, and alcohol lead to his downfall and eventual redemption.

What director Dexter Fletcher has created here is a dazzling cinematic joy of a film. I'm sure there will be comparisons to last year's "Bohemian Rhapsody", which I loved, but they are different movies, exploring character from different perspectives. Although, you could argue about their being closely related because Fletcher actually finished up directorial duties on "Bohemian Rhapsody", uncredited after Bryan Singer exited the project. However, the film you should compare this to is Julie Taymor's 2007 groundbreaking Beatles inspired musical "Across the Universe", the storytelling technique is exactly the same.

Casting Taron Egerton in the lead role was perfection. Egerton is simply brilliant, capturing the soul of Elton John and putting on the screen in a marvelously concocted flamboyance. He will undoubtedly be nominated for an Academy Award.

Also, George Richmond's stunning cinematography and Chris Dickens beautiful editing stand out and shouldn't be neglected, they also deserve to be considered for awards.

My take…"Rocketman" is one of those films that light up the cinematic universe. It's a musical, visual, storytelling gem; don't miss it.