Home / Reviews / The Art of Racing in the Rain

The Art of Racing in the Rain is one of the best films I’ve seen this year. I loved it, you will too. 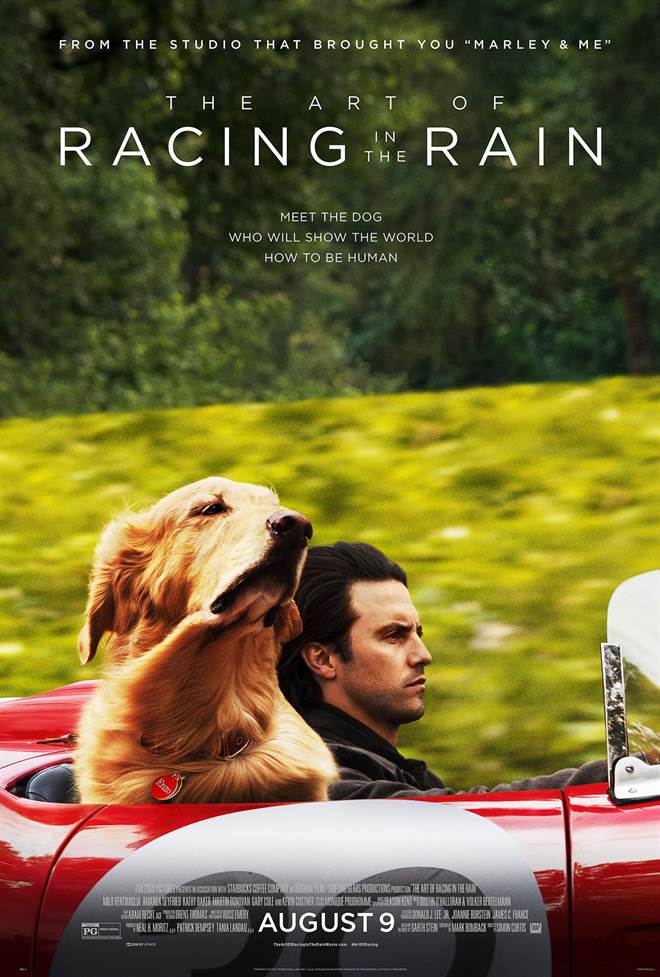 FACT: Of all the animal species in the world, the one we humans are closest to and have formed the most lasting relationship with is the dog. It's a relationship that started over 100,000 years ago, just about as long as we've trod this earth, and may actually be responsible for our survival as a species.

FACT: It's known that when humans pet or lock eyes with their dogs, our bodies release a hormone called ‘oxytocin', which is associated with both happiness and bonding. Conversely, dogs also seem acutely attuned to the emotional state of their masters and express similar affection and unconditional love.

This mutual admiration contract forms the backbone for the story told in "The Art of Racing in the Rain". It relates through observations and comments of one particular dog the varied episodes of his life paired with his human, the people around them, the sport they both love, and how it all impacts their lives.

On the way home from a race, aspiring Formula One racecar driver Denny Swift (Milo Ventimiglia) purchases a golden retriever pup he names Enzo (voiced by Kevin Costner). Enzo's witty and philosophical observations on the human condition as he grows up, educates himself by watching television, by listening to Danny's every word, and by interfacing with the people brought into his life, has gained him the perspective that one can successfully use the techniques applied on the racetrack to navigate all of life's ordeals.

Four things make up Danny's world, his wife, Eve (Amanda Seyfried), their young daughter Zoe (Ryan Kiera Armstrong), Racing, and his best friend, Enzo. When tragedy strikes and challenges everyone, it's left up to Enzo to make sense of it all and apply compassion where it's needed.

It's a story about the absurdities and challenges tossed at us as we travel through life, told as only one could imagine a dog could tell it.

Bring a box of tissues with you when you see this movie. It will play with your emotions, touch your heart, make you laugh, make you cry, and ultimately bring you a great big smile.

The performances are warm, touching, and flawless. The script is peppered with just the right amount of comedy and tragedy to keep you glued to the screen. The racing sequences amplify the overall story without overwhelming it, and Enzo is a total joy to watch, thanks in no small part to Costner's soft under-played interpretation.

In the film much is said about how dogs are treated in Mongolia when they die. Here's a quote from that, I think it's a nice way to end this review:

"In Mongolia, when a dog dies, he is buried high in the hills so people cannot walk on his grave. The dog's master whispers into the dog's ear his wishes that the dog will return as a man in his next life."

My take… "The Art of Racing in the Rain" is one of the best films I've seen this year. I loved it, you will too.

For more information about The Art of Racing in the Rain visit the FlickDirect Movie Database. For more reviews by Alyn Darnay please click here.

The Art of Racing in the Rain images are © 20th Century Fox. All Rights Reserved.

Allison Rose
Ventimiglia is solid and Seyfried, a personal favorite of mine, does a wonderful job as a loving, supportive wife.
Full Review | Grade: C