Elgort is well suited for this role. He has the classic, chiseled good looks that suits the character of the adult Theo. 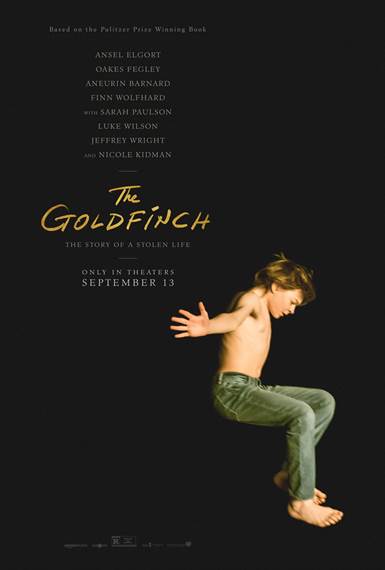 The Goldfinch is a 1654 painting by Carel Fabritius, which depicts the little bird chained to its feeder that is mounted on a wall.  In 2013 author Donna Tartt used the painting as one of the central characters in her novel, The Goldfinch.  The book went on to win the 2014 Pulitzer Prize for Fiction and this week Amazon Studios brings the story to theaters with the film adaptation.  Starring Ansel Elgort (The Fault in Our Stars) and Oakes Fegley (Pete's Dragon) as the grown and child Theo respectively, the movie takes us through the tragic event that shaped Theo's life.

Theo's mother loved art and her favorite painting was the Goldfinch.  On their way to school for a meeting, she and Theo stopped at the Metropolitan Museum of Art to take a look at it.  Unfortunately, a terrorist's bomb blew up and killed Theo's mom and an antique dealer named "Welty" Blackwell (Robert Joy; The Hills Have Eyes), but not before he encourages Theo to take his ring and the painting.   He instructed Theo to go to Hobart and Blackwell where he met Hobie (Jeffrey Wright; Westworld) and Pippa (Aimee Laurence; Chicago P.D./Ashleigh Cummings; Hounds of Love).

Theo went to live temporarily with his friend's family until his father (Luke Wilson; Old School) came to get him and took him to Las Vegas.  Shortly thereafter Theo's dad was killed in a car accident and Theo returned to New York City to live with Hobie.  The whole time Theo hid a dark secret – the Goldfinch painting he took from the museum that fateful day.  It is only years later that an adult Theo met his childhood friend Boris (Finn Wolfhard; Stranger Things/Aneurin Barnard; Dunkirk) again who revealed he took the painting from Theo when they lived in Las Vegas.  Boris now wants to make it right and the two travel to Amsterdam to get the painting back.  Things don't go according to plan and Theo ends up shooting someone, sending him into suicidal despair.

Elgort is well suited for this role.  He has the classic, chiseled good looks that suit the character of the adult Theo.  He balances the outer calm Theo exudes with the inner turmoil he feels.  Fegley is equally as strong as the younger version of the main character.  He is already impressive as an actor at a young age so it will be interesting to watch his career.  Wilson, Wright, Barnard, Nicole Kidman (Molin Rouge!), Sarah Paulson (American Horror Story) and the rest of the cast round out the ensemble nicely.

The tale being spun is intriguing enough but the movie can be self-indulgent at times, buying into the idea that the audience needs to know every single detail.  The pacing was good and at no time did I feel bored, which could arguable happen with a two and a half-hour long movie.  While the dialogue and plot kept me engaged the entire time, The Goldfinch is a terribly depressing film.  It starts that way and never lets up which can feel quite heavy emotionally after so long.

Symbolically, the goldfinch in the painting is much like Theo is in real life.  From a young age, he is trapped and hidden away (just as he does with the painting) and only once the painting is freed, so is Theo emotionally.  The two are connected in more ways than one and that connections drives the plot to completion, albeit on a bumpy ride along the way.

Having not yet read the book, I can't compare the film and maybe I wouldn't have enjoyed it as much as I did if I had read the book first but The Goldfinch has some solid performances and a respectable story that will keep the audience engaged.

Purchase a DVD/Blu-ray/4K UHD physical copy of The Goldfinch today at Amazon.com

Download The Goldfinch in Digital HD/4K from the iTunes store.

For more information about The Goldfinch visit the FlickDirect Movie Database. For more reviews by Allison Rose please click here.

Read More Reviews For The Goldfinch