Judy is a must-see for Zellweger's performance, which I’m sure well earn her an Oscar Nomination. I only wish the film was as good as she is, unfortunately, it’s not. 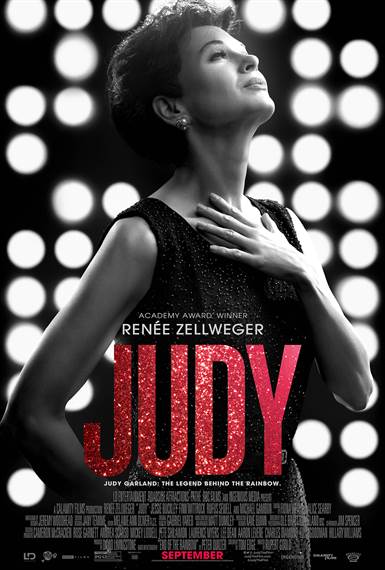 I went to see the new biopic "Judy" fully expecting to watch Renee Zellweger in performance, but she never showed up. That was ok though, because Judy Garland was there on the screen filling in for her, and was she ever good.

Playing a real-life person is the hardest challenge facing any actor, especially if that person is well known and beloved by millions of adoring fans. Most performers trying to do this wind up creating characters that are just weak imitations of their subject. They find and use some of their mannerisms, throw on a style of make-up that helps them look similar, dress as they did, and attempt to vocally and/or physically bring as much of the person to the story as they can. A very few (Brando, Dean, Streep, etc.) have the ability to really drop their own personas and actually become who they are portraying.

I've seen several theatrical productions about Judy Garland; my friend, actress Lee Marlow has a great one, but Renee Zellweger's interpretation of Garland enduring the slings and arrows of her last year on Earth, goes way beyond anything that's ever preceded it. Her two-year creative journey into the skin and soul of this adored performer has brought her to a performance level so real, so compelling, and so tragic, it becomes a heartbreaking tour de force exploration into the deeply troubled star's life at its lowest possible point.

The film opens with young Judy (Shaw) standing on the yellow brick road being totally controlled by studio head Louis B. Mayer (Cordery). He sets her schedule, restricts her diet, and has her take drugs for energy and to sleep.

The film then jumps to1968, thirty years since she rose to stardom in the "Wizard Of Oz". Forty-seven-year-old Judy (Zellweger) is broke and desperate, going from one low paying appearance to another with her children in tow. Once her apartment is taken away, her only option to survive is to take an offered five-week sold out series of performances in London at the famous "Talk Of The Town Nightclub".

So, parking her children with their father, her ex-husband Sidney Luft (Sewell), off she goes to England to perform. She knows her voice is no longer as strong as it was, she is alone, an alcoholic, anxiety-ridden, addicted to drugs, and suffering from depression and stage fright, yet she still finds the strength to go on. Along the way she manages to fall in love and marry her fifth husband, musician Mickey Deans (Wittrock), who is attempting to help her overcome her difficulties.

If you're a stickler for historical accuracy in the story, you won't find a lot of it here. What you will find is a performance that rises above the story, Zellweger's beautiful voice singing Garland's songs with remarkable pizzazz, a rollercoaster of emotions tugging at you throughout the film, and a well-acted, well filmed, movie you'll not soon forget.

What you won't find here is a joyous uplifting movie that'll have you singing "Over The Rainbow" as you exit the theater.

My take…"Judy" is a must-see for Zellweger's performance, which I'm sure well earn her an Oscar Nomination. I only wish the film was as good as she is, unfortunately, it's not.

Download Judy in Digital HD/4K from the iTunes store.

Listen to the Judy soundtrack on Apple Music.