Fiennes is perfectly cast as the moody, pompous, celebrity chef who creates masterpieces. 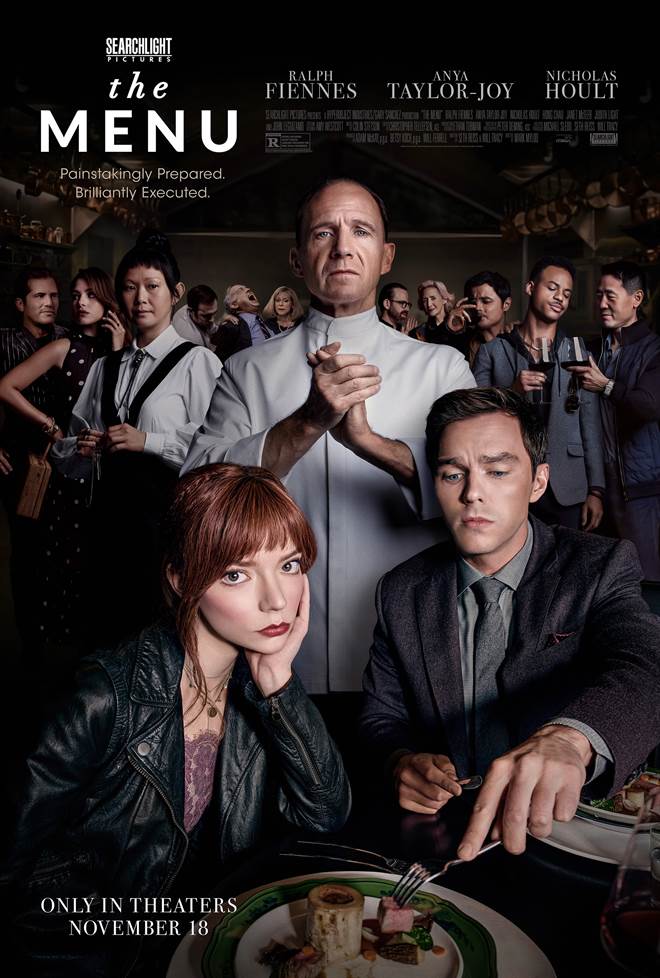 When one goes out to a fancy restaurant generally one expects delicious, possibly exotic food.  One can also expect an expensive bill.  However, along with those, one doesn't often expect a lesson in morality nor a life-threatening experience - well,  unless one decides to order fugu sushi (puffer/blowfish fish).  In Searchlight Pictures latest release, The Menu, the elite and selective list of clients don't know what is to come when they pay a small fortune to travel to a remote island to eat at famed Chef, Julian Slowick's (Ralph Fiennes; Strange Days) exclusive restaurant, Hawthorne. What they get is some incredible and somewhat bizarre food...with a twist.

Tyler (Nicholas Hoult; X-Men Franchise) is a self-proclaimed "foodie".  He savors every morsel and yearns to learn all he can.  As he and his date, Margot (Anya Taylor-Joy; Last Night in Soho), wait for the boat to take them to the excluded island where they will dine on exquisite cuisine, Tyler can hardly contain himself.  After a tour of the Island, they and the other quests make their way to the restaurant and, as the first course is served, there, in front of all eleven guests, is the legendary chef Slowik.  The first course is incredible but as the evening continues, each course becomes more and more bizarre and eventually dangerous, until dessert brings about the explosive conclusion to the evening.

Fiennes is perfectly cast as the moody, pompous, celebrity chef who creates masterpieces while Taylor-Joy is the innocent young lady who finds herself biting off more than she can chew (pun intended).  She is a performer who consistently delivers one stellar performance after another and her portrayal of Margot is just another addition to her portfolio.

Hoult's Tyler is annoying and smug but he isn't the only one in the room. John Leguizamo (Moulin Rouge!) portrays an aging actor looking to reignite his career while trying to convince his embezzling assistant, Felicity (Aimee Carrero; Blindspot), to stay.  However, with all these excellent performances, the actor who stands out is Hong Chau (Downsizing) as Slowick's assistant, Elsa.  Between her facial expressions and her tone every time she speaks, her Elsa is memorable.

Know more for his work on television series, Director Mark Mylod (Succession) does an excellent job of lulling the viewer into a sense of ease, completely unaware of what is to come.  His visuals of the island, as downed trees with broken branches litter the shoreline, are symbolic of the inherent brokenness of the restaurant guests.  Mylod's pacing is timed perfectly and fans of his television work will recognize some of his directorial styles in The Menu.

Writers Seth Reiss (Late Night with Seth Meyers) and Will Tracy (Succession) are genius wordsmiths who combined food, humor, and horror together as if they are everyday occurrences.  The written descriptions of the courses and the monologues Fiennes spouts to introduce those items are flavored with wording that, at times, is as exotic as the dishes themselves.

Of course, The Menu isn't complete without the various foods that are painstakingly prepared.  The dishes are artistic masterpieces and, like some films where the music is memorable, they are merely one of the many characters being manipulated and molded in anticipation of the climatic moment as it all comes to an end.

Want the recipe for an Oscar-worthy film?  Take one part director with a keen eye and mix in two-parts fantastic writers. Then add a phenomenal cast and an implausible and twisted plot and slow roast it all for about an hour and forty-five minutes.  Remove it from the oven, let it rest, plate it and pair it with fine wine.

Listen to the The Menu soundtrack on Apple Music.

For more information about The Menu visit the FlickDirect Movie Database. For more reviews by Allison Rose please click here.

The Menu images are © Searchlight Pictures. All Rights Reserved.