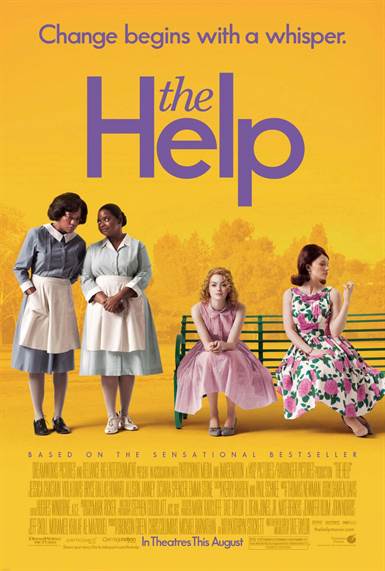 Purchase   DVD/Blu-ray/4K UHD
It's hard to believe that it was only a short period of time ago that people were still separating black from white.  In The Help we find what a little thing like writing a book could do to stir up segregation and bring it to the forefront.  In this story there's a huge helping of right versus wrong with an unexpected outcome that reminds all that man's inhumanity to man did exist even in the good old USA.
It's the 1960's Mississippi and the women in this particular town are prominent southern ladies who spend their days at teas and community events.  Their social life depends on how they look and present themselves so having a maid or two is a normal thing.  Skeeter, a local socialite, has just graduated college from Mississippi State and returns following her long absence. Being brought up by a black housekeeper she's familiar with the power of the local ladies over the help.  A New York publisher gets a call from Skeeter about her wanting to write for the publication and the editor tells her that she wants something controversial.  When she offers her a story on ‘The Help' things start getting edgy in Mississippi.
I like the way writer/director Tate Taylor spools his story out slowly delivering a lot of character build-up in this segregation drama. Featuring fine acting from the whole cast their characters are caring, loving, controlling, hurtful and rebellious making the story forceful and convincing yet entertaining.
Both Taylor and novelist Kathryn Stockett were brought up in Mississippi homes where African American maids did all the work including the much-needed attention to the children of the household.  This first hand knowledge makes the film more real and compelling.  Taylor uses his sets and costumes to depict the era while putting his actors through their everyday routines, confrontations and finally a remarkable showdown that sums up the message embodied the film "Change begins with a whisper".
The musical score by Thomas Newman helps put each of the scenes in the mood intended and remarkably adds to the dialogue. A song by Mary J. Blige "The Living Proof" written and sung by Mary for the film adds power to the presentation. Please stay for the end credits to hear the complete rendition.
Emma Stone has been making films for several years, all of which were shallow except for possibly Zombieland where she excelled here as a sweetheart with a cobra's bite.  Here she does an outstanding job playing Skeeter with a very believable performance showing that yes, she can play with the big girls.
The Help is rated PG-13 for thematic material.  It does contain some derogatory language and vicious remarks so please be aware of this in choosing to bring immature youngsters.

Purchase a DVD/Blu-ray/4K UHD physical copy of The Help today at Amazon.com

Download The Help in Digital HD/4K from the iTunes store.

For more information about The Help visit the FlickDirect Movie Database. For more reviews by John Delia please click here.

The Help images are © DreamWorks Studios. All Rights Reserved.

Read More Reviews For The Help