'The Incredible Burt Wonderstone' - Not 'Incredible' Good For a Laugh. 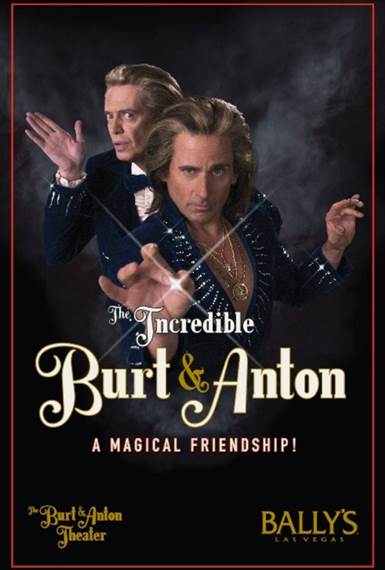 Purchase   DVD/Blu-ray/4K UHD
As the opening night headliner for SXSW 2013, this movie opened to a packed house in Austin, Texas.  The crowd laughed along with Burt Wonderstone, but it was the movie's antagonist who steals the show.  Steve Carrell plays the adult Burt Wonderstone, who was given a magic kit for his birthday (which included an instructional videotape from magician Rance Holloway, who is played by Alan Arkin).  Burt shows a trick to another kid at his school, Anton Marvelton (played as an adult by Steve Buscemi), who is amazed by it and asks to become his partner.  The two become good friends and start developing their own tricks.  The movie quickly jumps to the present, where Burt and Anton have landed a gig at Bally's in Las Vegas, who is run by Doug Munny (James Gandolfini).  Their unaltered act has been playing for ten years, but times are changing.

People seem to be more amazed by a street magician, Steve Gray (played by Jim Carrey), who calls himself the "Brain Rapist".  Burt and Anton blow off Steve but soon come to blows over improving their act, leading the pair to break up, and even part ways with their long time production assistant, Jane (played by Olivia Wilde).  Along the way, Burt must remember why he did magic in the first place, and his relationships with others.  Steve Carell delivers a comedic performance I haven't seen him do in a long time, proving that he can be funny if he isn't playing Michael Scott (or a Michael Scott—like character).  He pairs well with Steve Buscemi, who unfortunately isn't given enough time to shine in this film.  Olivia Wilde is solid with her performance of Jane, a long time production assistant, and secret magician wannabe.  Unfortunately at times the chemistry between Jane and Burt is forced, and it's not the fault of the actors, just a shortcoming of the script.  But the antagonist isn't.

Jim Carrey is back!  He delivers his best comedic performance since The Mask. He is able to go back to his physical comedy roots, with his facial expression abilities that made him famous.  This adds to the allure of his character, Steve Gray, who at first seems content on being just a street magician patterned after Criss Angel and David Blaine.  It doesn't take much sleight of hand to see that it's just an illusion.  Time after time the script comes up with things for Steve Gray to do in order to mess with the observer's minds, and it doesn't sense until the bitter end.
It was refreshing to also have a funny movie that doesn't rely on vulgar jokes to stay funny; while there are adult-oriented scenes in the movie, the language used isn't that bad, and still keeps the scene funny, especially a scene which seems evident that the movie gets product placement from a major brand of prophylactics.

There a few moments where you will have fully suspend your disbeliefs, even though it is a movie about illusions, and was generally acceptable until the ending.  While it's funny, it's not something that could really happen on a regular basis and brings the movie down a notch.  I'm not going to spoil it for you here – just go out and see it.  It's good for a laugh.

Download The Incredible Burt Wonderstone in Digital HD/4K from the iTunes store.