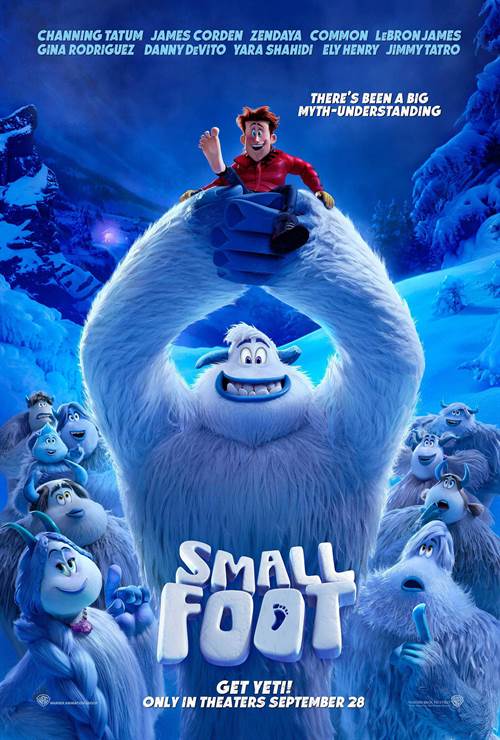 An animated adventure for all ages, with original music and an all-star cast, “Smallfoot” turns the Bigfoot legend upside down when a bright young Yeti finds something he thought didn’t exist—a human.

News of this “smallfoot” throws the simple Yeti community into an uproar over what else might be out there in the big world beyond their snowy village, in an all new story about friendship, courage and the joy of discovery.

Stream Smallfoot in Digital HD/4K from the AppleTV store.

Listen to the Smallfoot soundtrack on Apple Music. 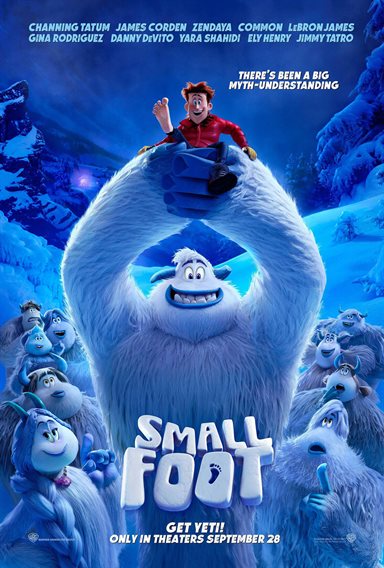 For years people have searched far and wide for the elusive Yeti/Bigfoot.  Some say it doesn't exist.  Others claim to have seen it.  What if it really does exist and believes WE humans are the fictional creatures?  Warner Bros. Animation brings this concept to life in their latest animated feature Small Foot. Set in the Himalayan Mountains this movie flips everything we know about the world and makes us look at it from a whole new perspective…that of the large creatures living harmoniously above the clouds.

All Migo (Channing Tatum; 21 Jump Street) ever wanted was to follow in his father's footsteps.  For generations, his family has been the "gong ringers" in the village waking the "snail sun" each morning.  For years he has helped his father watching and learning.  Then one day the Stonekeeper (Common; Selma) gave Migo his own helmet and said it was time for him to start practicing to take over the important task.  As he practiced, he missed…often.  Then on one fateful flight, he completely went off track and overshot the gong tumbling down the mountain.  On his way back to the village though he saw a shiny flying object and discovered an actual small foot.

When Migo went back to the Village to tell them what he had learned, he was banished for lying.  However, a small group of yeti's, including the Stonekeeper's daughter Meechee (Zendaya; The Greatest Showman), believed him and they all set out to prove the existence of the small foot.  However, when Migo finds one and brings him back to the village it creates an uproar and Migo learns a truth he never knew causing him to examine his own motives for wanting to prove that there really are small feet/humans.

Tatum is actually pretty solid as Migo with different inflections to his voice guiding his emotions throughout the story.  Zendaya can do no wrong as evidenced by last year's performance in The Greatest Showman. I understand why they used Common for the Stonekeeper wince his deeper voice lends itself to that of an elderly statesman and because they had him do a rap song in the middle of the film.  James Cordon (Into the Woods) voices Percy, the small foot and Danny DeVito (Batman Returns) plays Migo Dad, Dorgle.  With such rich and vibrant voice talent, there is a lot to enjoy about this movie.

The animation should also be commended as colors are vibrant and the textures are deep.  Every piece of fur on the yetis are detailed and move with the wind effortlessly.  The script, however, is a little mature for the audience it is intended for.  Words like fortitude are clearly meant for the adults, as children won't understand the meaning.

The music is decent and some of the tunes are catchy enough.  You won't necessarily be humming them as you walk out of the theater but if you have young children I'm fairly certain you will be listening to the soundtrack more than one.  Zendaya lends her vocal talents to one of the songs and as mentioned, Common performs a rap number. Tatum even sings the opening song and surprisingly he isn't that bad.  Tragically, they took the tune of Under Pressure and changed the lyrics to create an unfortunate song that would probably have both Freddy Mercury and Davie Bowie rolling over in their graves.  For the most part, though the songs are rather generic and not terribly memorable.

The movie will also provoke controversy, especially from religious groups.  Depending on one's viewpoint, Small Foot can make the argument either for or against organized religion.  Some will say it is all a lie while others will say that it serves a purpose as a way to "keep people safe".   Whatever your opinions, the film is definitely religiously charged, again a fact that will be lost on children but won't escape older members of the audience.

Small Foot combines some unpopular viewpoints with some decent songs and adorable characters to make for an enjoyable movie experience.  Parents will tolerate it and kids will most likely like it.  I'm sure there will be more than one Yeti costume this Halloween and a few stuffed yetis under some trees come holiday time.