Meet Will & Grace. Grace is a sassy and smart interior designer, Will is a gorgeous and super-cool lawyer. They’re both looking for love and they’re made for each other in every way but one- Grace is straight, Will is gay. Their lives are complicated even further by their outrageous friends, Karen and Jack who meet for the first time.

Download Will & Grace in Digital HD/4K from the iTunes store.

Will & Grace images are © NBC Universal. All Rights Reserved.

Will & Grace (The Revival): Season One DVD Review 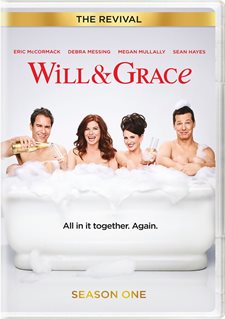 In the 1980's and 1990's comedy was king on television and the thirty-minute sitcom show was all the rage.  The Cosby Show, Roseanne, Home Improvement, etc. spent years making us laugh on a weekly basis.  Will and Grace came in on the end of this phenomenon and spent eight years entertaining audiences.  The cast and crew had a rapport that simply resonated and magically came to life week after week.  While we have seen a decline in sitcoms over the last ten years – making way for more top quality hour-long dramas – there is always room to make people laugh.  After a brief reprise by the team to encourage people to vote it was decided to bring the show back to television and Season One The Revival (or Season Nine) debuted on September 27, 2017.

If you remember, Will (Eric McCormack; Perception) and Grace (Debra Messing; The Wedding Date) are best friends who even tried dating in high school.  She is a heterosexual interior designer, He is a gay lawyer (hence why their dating didn't work out so well).  They live together temporarily yet seemingly long-term in New York City.  Their other friends include the happily effeminate gay man Jack (Sean Hayes; The Three Stooges) and the amoral socialite Karen (Megan Mullally; Why Him?).  Together they dysfunctionally navigate life, love, and work.

As the new season opens we see Will and Grace once again living together as she picks up the pieces after her divorce.  Karen still works for Grace - well "work" is a relative term and Will is still with the same law firm he was working at 11 years ago.  Jack is Jack, flamboyantly wonderful and working here and there while getting himself into ridiculous scenarios in life and dating.  Throughout the sixteen episodes, we watch Will go through a midlife crisis and quit his job, we mourn the passing of Karen's longtime made Rosario and we endure all the relationships up and downs each of the four of them go through.

There is no denying part of what made the show so successful the first time around was the chemistry between the four main cast members and I'm happy to report that chemistry is alive and well.  As they reunite we see the witty banter continue and the earnest love flow freely.  McCormack and Messing we made to be best friends (on television at least) and their encounters are like riding a bike – you may be rusty but you never forget.  Hayes and Mullally round out the quartet and the four are a well-oiled machine delivering laughs and firing on all cylinders.

Of course, their chemistry wouldn't matter much without the writing and that is where the real change seems to be between the original series and this revival.  Don't get me wrong it is still excellent on many levels but it is certainly more political and preachy than it was 11 years ago.  Of course the climate such that they can do that this time around (sort of) but at times it seems to be just a bit too much.  There are some episodes like the one about the gay conversion camp that are poignant and most definitely relevant though and the laughs are still there. The jokes still poke fun at anyone and everyone in a (mostly) nondiscriminatory way.

The DVD is comprised of a two-disc set that includes all sixteen episodes and four extras.  They include a gag reel that actually has some funny moments (so many gag reels don't), Reuniting the team which looks at the main actors, Back to the Beginning discussing the origins of the show and Classic Comedy which is somewhat of a love letter to show runny James Burrow (Cheers).  While not terribly long all the extras are worth watching.

If you were a fan of the show originally (and let's face it, who wasn't) then you will find plenty to love about this revival.  The cast is still phenomenal and the writing is still sharp.  While the rating may have fallen a little from episode one to episode sixteen the show is still a hit as evidenced by the announcement of renewal for Seasons Two and Three (or Ten and Eleven).  Unlike some revivals, Will and Grace is still a hit and worthy to add to your video library.