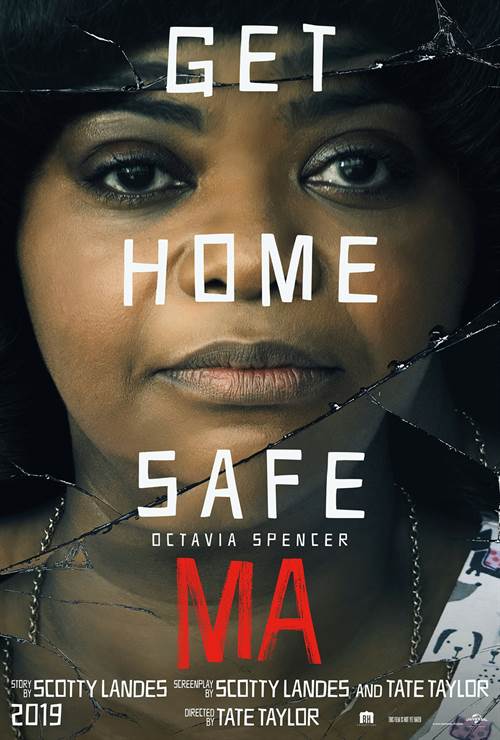 Everybody’s welcome at Ma’s. But good luck getting home safe.

She offers the kids the chance to avoid drinking and driving by hanging out in the basement of her home. But there are some house rules: One of the kids has to stay sober. Don’t curse. Never go upstairs. And call her “Ma.”

But as Ma’s hospitality starts to curdle into obsession, what began as a teenage dream turns into a terrorizing nightmare, and Ma’s place goes from the best place in town to the worst place on earth.

Ma is written by Scotty Landes (Comedy Central’s Workaholics) and Taylor, is produced by Blum for his Blumhouse Productions, by Taylor, and by John Norris (executive producer, Get On Up), and is executive produced by Spencer, Couper Samuelson, Jeanette Volturno, and Robin Fisichella.

Stream Ma in Digital HD/4K from the AppleTV store.


Win a Blu-ray Copy of Ma From FlickDirect and Universal Pictures  9/2/2019 3:42 PM EST
This spring, audiences were treated to Academy Award winner Octavia Spencer's version of a crazy woman in the thriller, MA.  While she seemed like every teenager's cool, older aunt, she had an ulterior motive laying just beneath the surface.  FlickDirect, in conjunction with Universal Pictures, would like to give one lucky winner a Blu-ray Combo pack of this film.To Enter follow these easy steps: ...  More>>

Win Passes For Two To An Advance Screening of Universal Pictures...  5/21/2019 4:15 PM EST
Academy Award Winner Octavia Spencer can play almost any character.  We have seen her show her comedic side in Bad Santa 2 and watched as she deified authority in Hidden Figures.  Now she takes on the lead in Universal Pictures latest horror/thriller, MA.   FlickDirect, in conjunction with Universal Pictures, would like to give some lucky winners the opportunity to see the film on May 28, 2019, at...  More>> 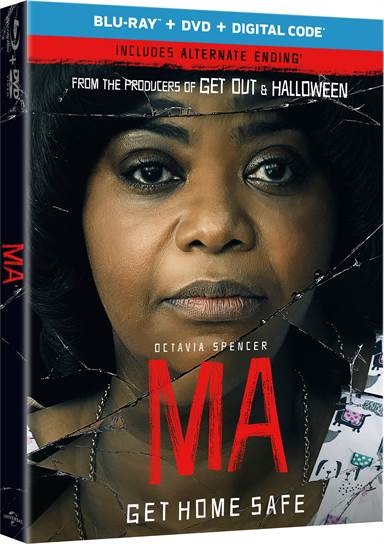 High school can be tough. For some, it can be an absolute nightmare. There will always be "that crowd" of kids who deem themselves superior, pulling pranks often on vulnerable victims. These victims can go either way in life - they can rise above their torment and become stronger for it or they can be left permanently scarred in ways that can cause them to want to harm themselves or others. In Ma we see the latter happen - the "revenge" scenario that some bullied kids probably dream about in some way or another. Released in theaters on May 31, 2019, you can now grab this thriller on Blu-ray.

Fast forward to the present day, Erica (Juliette Lewis, August: Osage County) and her daughter, Maggie (Diana Silvers, Booksmart), are moving back to Erica's hometown. Once there, Maggie meets some kids who become a group of friends. One day they decide that they want to have a party but they need an adult to buy alcohol for them. While waiting outside of a liquor store, they meet Sue Ann who was nice enough to buy them their alcohol. After being busted by the cops, however, the kids needed a new place to party. Once again, Sue Ann agrees to buy the kids alcohol but this time she offers them a safe place to party - her basement. Sue Ann appears to be gaining popularity with the kids but things quickly go dangerously south when, after a series of events that upset the kids, they decide that they won't be partying at Ma's anymore.

Spencer's character portrayal is something we haven't really seen from her before. Sure, she's played some strong roles but this takes the cake. Her portrayal of this character is downright disturbing and reminds us all just how talented she is. Silvers is also quite good in her role as Maggie, and Lewis plays the role of her parent well. The rest of the cast rounds out the story with solid performances as well.

Ma is presented in its original aspect ratio of 2.39:1. As with most films released in the last few years, the transfer to 1080p is a very well oiled machine by now. While there is a bit of noise to be found here and there the blacks are true, the colors are natural, and no artificating can be found. The lossless 5.1 Master Audio provides the right mixture of dialog (relegated to the center channel) and ambient sound effects. They have Ma's party's come to life in your home theater beautifully.   Special Features included in this title are: Even though the "revenge" aspect of the film is a time-worn plot, this was a refreshing twist - getting even through the children of those you hate. However, while I did enjoy the film, it did feel it was a bit anti-climactic at the end. Even with that, it's still worth the watch.