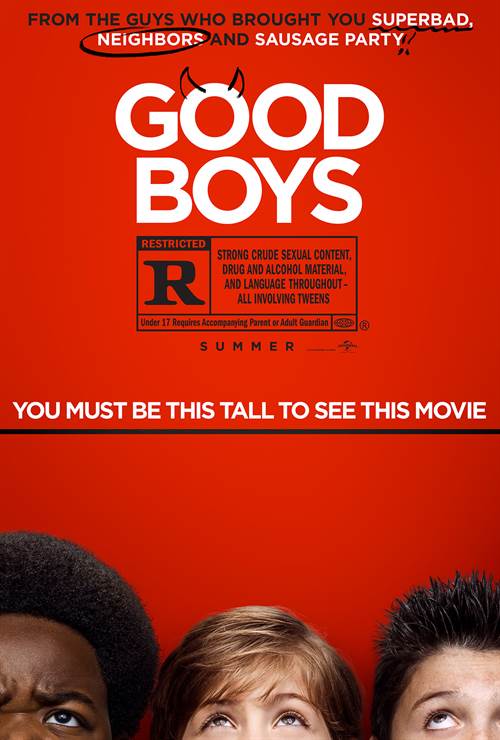 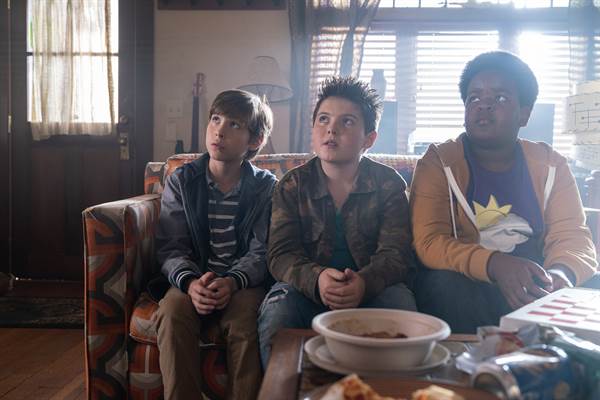 Just how bad can one day get? The creative minds behind Superbad, Pineapple Express and Sausage Party take on sixth grade hard in the outrageous comedy, Good Boys.

After being invited to his first kissing party, 12-year-old Max (Room’s Jacob Tremblay) is panicking because he doesn’t know how to kiss. Eager for some pointers, Max and his best friends Thor (Brady Noon, HBO’s Boardwalk Empire) and Lucas (Keith L. Williams, Fox’s The Last Man On Earth) decide to use Max’s dad’s drone – which Max is forbidden to touch – to spy (they think) on a teenage couple making out next door.

But when things go ridiculously wrong, the drone is destroyed. Desperate to replace it before Max’s dad (Will Forte, The Last Man on Earth) gets home, the boys skip school and set off on an odyssey of epically bad decisions involving some accidentally stolen drugs, frat-house paintball, and running from both the cops and terrifying teenage girls (Life of the Party’s Molly Gordon and Ocean’s Eight’s Midori Francis).


Get a Free Copy of Good Boys on Blu-ray Combo Pack  10/28/2019 12:57 PM EST
This past August the world was exposed to three teenage boys on a unique adventure and we haven't been the same since.  GOOD BOYS is the hilariously funny and inappropriate "coming of age" tale that grossed $110 million worldwide.  Before it makes it... | Full Article

Free Screenings of Good Boys in Select Theatres on August 7  8/5/2019 4:54 PM EST
In order to commemorate National Friendship Day on August 7, 2019, Good Boys will be available in select theatres for free screenings.The announcement was made today by Seth Rogen and Universal Pictures. More than 10,000 free tickets will be availabl... | Full Article

Win Passes For 2 To An Advance Screening of Universal Pictures' ...  8/5/2019 3:08 PM EST
From the brilliant and warped minds of the people who brought you Superbad, Neighbors and Sausage Party comes to their latest endeavor called GOOD BOYS.  As you can only imagine it will offer the hilarious hijinks of three sixth-graders who ditch sch... | Full Article

For this edition of This Weekend At The Movies, FlickDirect& Austin Putnam reviews GOOD BOYS!

Allison Rose
The cast, for being so young, is excellent. Trembly is already a seasoned professional with a number of terrific performances under his belt.
Full Review | Grade: B