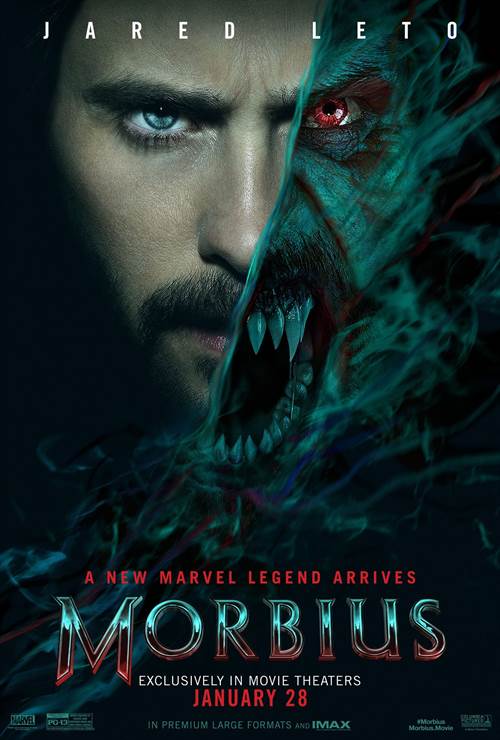 One of Marvel’s most compelling and conflicted characters comes to the big screen as Oscar® winner Jared Leto transforms into the enigmatic antihero Michael Morbius. Dangerously ill with a rare blood disorder and determined to save others suffering his same fate, Dr. Morbius attempts a desperate gamble.  While at first, it seems to be a radical success, a darkness inside him is unleashed. Will good override evil – or will Morbius succumb to his mysterious new urges?

Stream Morbius in Digital HD/4K from the AppleTV store.

Listen to the Morbius soundtrack on Apple Music. 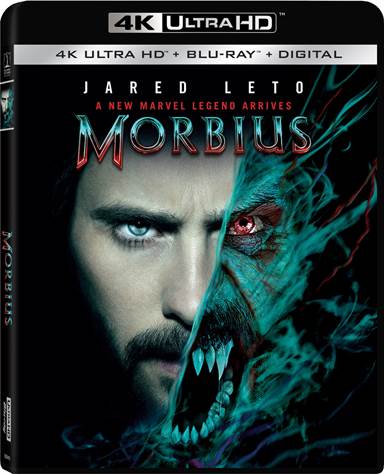 I wonder how many Marvel Comics Characters we have met over the last dozen or so years. Between all the films there have been well over twenty so far and in April we got to see another one come to the big screen in the feature film Morbius.  Starring Jared Leto (House of Gucci) and Matt Smith (Last Night In Soho), the movie grossed $163 million worldwide but was panned by critics who felt the writing and visual effects were subpar, especially for a Marvel film.  However, since the movie is part of the Marvel Cinematic Universe/Sony Spiderverse, it has a built-in audience, many of whom will be heading to stores to purchase the 4K Blu-ray combo pack.

Dr. Michael Morbius (Leto) was born with a rare blood disorder and has dedicated his life to finding a cure in order to heal himself and others with the deadly disease.  His latest experiment has him heading to Costa Rica to capture Vampire Bats.  Splicing the bats’ genes with his own, Morbius finds himself healed with the added benefits of superhuman strength, speed, reflexes, and echolocation hearing.

However, he soon discovers the experiment has turned him into a Vampire and has left him with blood lust.  He is able to temporarily stave off the cravings by feeding on the synthetic blood he creates but it is only a short-term remedy as the feeling of cessation lasts a little bit less after each “feeding”. Meanwhile, Morbius’ friend and financial backer is fellow “blood brother” Milo who gets angry when Morbius refuses to give him the cure.  Milo then steals the antidote and turns himself into a vampire as well but with less remorse for killing than Morbius.

Leto is known as a “method” actor and that style of acting tends to work well for him. He has been known in the past to physically alter his appearance, gaining or losing weight as necessary and remaining in character throughout filming.  Surprisingly, this technique doesn’t seem to work as well for him this time as it has in past performances.  His Morbius is very even-keeled rarely displaying the range of emotions we know he is capable of presenting,  Smith offers more in terms of character development as Milo explores a range of emotions from despair to elation to anger and selfishness.  The rest of the cast is fine but the script doesn’t give them much to truly sink their teeth into (pun intended).

The 4k disc is presented in Dolby Vision with a 2160p resolution.  Details are sharp and visuals are clean. Since much of this movie takes place in dark hallways or at night, black hues are important and the picture quality presents those tones beautifully.  The lossless Dolby Atmos audio is equally impressive as the visual presentation with ambient sounds bouncing from speaker to speaker for a fully immersive experience.

The combo pack offers 2 discs - 4K and Blu-ray and a digital code.  The outer casing has a cool hologram that changes Dr. Morbius into the vampire as you move and tilt the packaging in various ways.  The Blu-ray Disc houses several extras, which include Outtakes & Bloopers, Defining The Antihero, From Human to Vampire – Visual Effects, Lights, Camera, Action, The Good, Bad & Ugly – Supporting Cast Doing the Stunt Work, and living Vampire from Comics to Screen - Nocturnal Easter Eggs.

Morbius fails to grab the audience from the beginning and a plot that has quite a bit of potential, simply put, falls flat.  Leto seems to be dialing in his performance which is a disappointment because he has so many incredible characters.  Within the MCU, Morbius would definitely be ranked towards the bottom of the list not simply because it has stiff competition.

The 4K quality paired with Dolby Atmos audio and some very good extras give this film a boost, but it can’t erase the script and effects that weigh Morbius down.