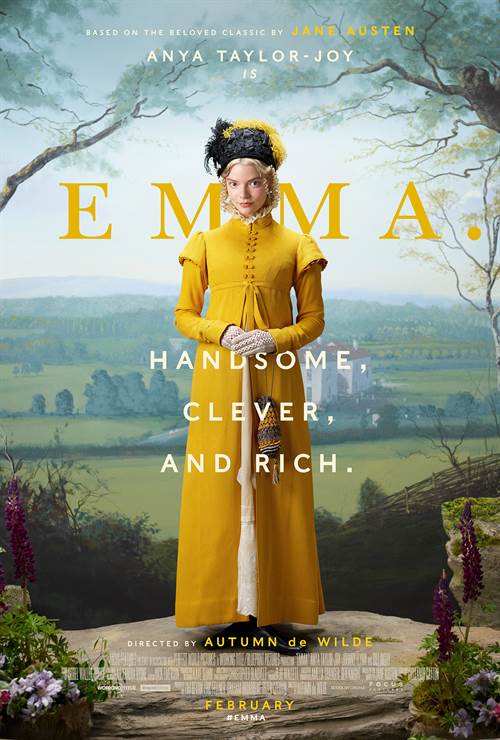 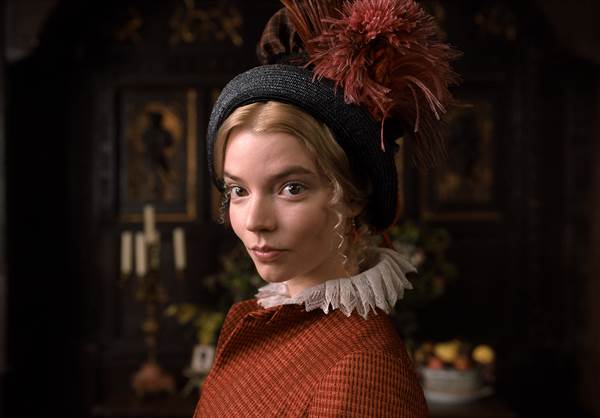 Jane Austen’s beloved comedy about finding your equal and earning your happy ending is reimagined in this delicious new film adaptation of EMMA. Handsome, clever, and rich, Emma Woodhouse is a restless queen bee without rivals in her sleepy little town.  In this glittering satire of social class and the pain of growing up, Emma must adventure through misguided matches and romantic missteps to find the love that has been there all along. 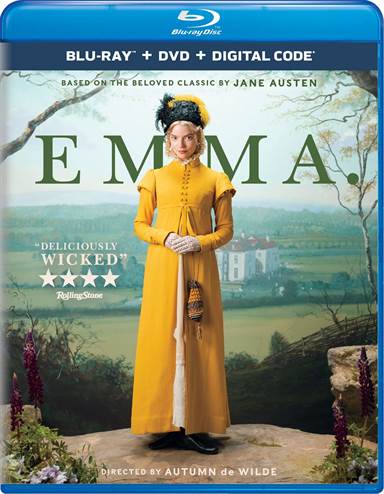 There's something unique, beautiful, and visually stunning about the way that British filmmakers try to recreate a certain era of their history. I'm referring to the Georgian/Regency era when big manner houses dotted the countryside and the polite society of upper-class nobility lived a charmed and somewhat jaded existence. It's a historic period that Jane Austen wrote about with a deft pen, a Wiley sense of humor, a heartfelt understanding of, and a not so hidden love for.

"EMMA", probably the tamest of Austen's novels, has been brought to life many times, four movies, of course, a BBC series, and also as a pop musical featuring hit songs by legendary girl groups. Perhaps the most interesting film interpretation for our times was "Clueless", the witty comedy set in Los Angeles starring Alicia Silverstone (Batman & Robin) and the late Brittany Murphy (Just Married). The thing about "EMMA" that makes the story so timeless is its sensibilities toward love, kindness, forgiveness, empathy, and generosity amid the humorous antics of its broadcast of oddly driven characters.

Unfortunately, this film came out in February, just as the Covid-19 pandemic was escalating, and its release was cut short before it could find a broad audience. Now, however, on a new Blu-ray, digital HD release and on streaming networks it will finally get a chance to transport its viewers to a beautifully envisioned time when matters of the heart reign supreme.

"EMMA" written in 1815 is one of Jane Austen's most beloved books. It's a comedy/drama about love within a tangled web of woe-begotten relationships and everyone's attempts at finding their own happy ending.

Twenty-one year old Emma Woodhouse (Taylor-Joy; The Witch), whose charmed life and social leadership has led her into a series of misguided and meddlesome matchmaking efforts, has to constantly find ways out of the entanglements she herself has wrought.

As travails descend upon her from a myriad of directions, she finds herself drawn into the matchmaking fray, when her own sense of desire rears its head and she discovers she also needs love and affection.

This film version of the story, visually sumptuous as it is, and it is a real treat for the eye, is a bit too long for its own good. At over two hours the story tends to drag in several places. It also lacks some of the book's humor, which fans have come to love about it.

What is terrific though, is the total recreation of the period. The smallest detail is painstakingly and meticulously placed in front of your eyes. Each scene is its own painting of the bygone era. It's as if a museum came to life. And it didn't stop with the scenery. Under the watchful direction of Autumn de Wilde, the actors themselves did a brilliant job of recreating the verbiage of the times, the walk and movement of the era, even the mannerisms or reactions expected of people of that time.

The details are easily discernable with the naked eye thanks to the 1080p resolution and 1.85:1 aspect ratio. The supposed English countryside is beautifully shot and is only equaled by the tremendously luxurious costumes Emma dons.  The DTS-HD Master Audio 5.1 is layered to subtly enhance the dialogue over the melodious soundtrack.  The Blu-ray disc houses the extras which include: Deleted Scenes, Gag Reel, A Playful Tease, Crafting a Colorful World, The Autumn Gaze and Feature Commentary with Director Autumn de Wilde, Screenwriter Eleanor Catton, and Director of Photography Christopher Blauvelt.

My take… "EMMA" is a treat for the eye. However, if a story doesn't grab me in the first 4 minutes, then it takes me a while to get into the film. That's the problem here. This film caught and held me with its visual content; unfortunately, the story never reached the level of the novel.