Home / Movie Database / Dead To Me 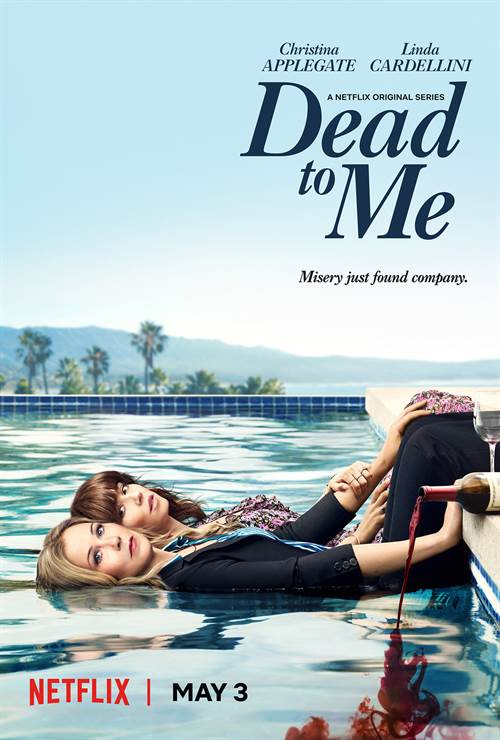 Dead To Me Synopsis 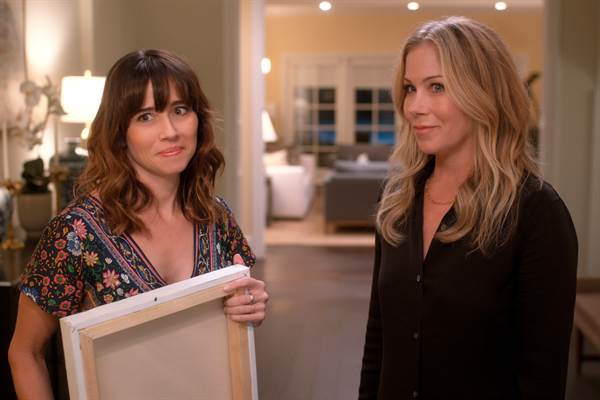 Jen (Christina Applegate) is a sardonic widow determined to solve her husband's recent hit-and-run murder. Judy (Linda Cardellini) is an optimistic free spirit who's recently suffered her own tragic loss. When the two women meet at a support group, they become unlikely friends despite their polar-opposite personalities. But as they bond over bottles of wine, Entenmann's cookies and a shared affinity for The Facts of Life, Judy desperately tries to shield Jen from a shocking secret that could destroy her life as she knows it.

Dead To Me images are © Netflix. All Rights Reserved.

Dead To Me Series Review 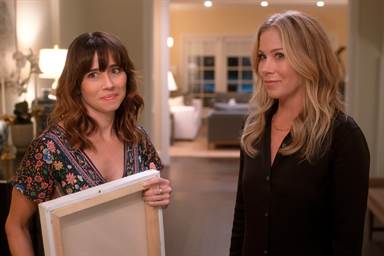 In 1997 Netflix was founded by Marc Randolph and Reed Hastings.  For many years they were successful "renting" DVDs that were shipped to homeowners who paid a monthly fee for the service.  By 2010 they had expanded to add a streaming service to their offerings, again, for a price.  As their streaming channel  grew they began producing original content including the television series, Stranger Things and award-winning, critically acclaimed feature films like Roma and The Irishman.  Last May they premiered a ten-episode, thirty-minute, black comedy called Dead To Me.  Starring Christina Applegate (Married… with Children) and Linda Cardellini (Scooby-Doo), the show quickly met with approval from critics and audiences alike.  One year later, Season 2 is set to premiere this week.

If you watch the show you will remember in season one that Judy (Cardellini) befriended widow Jen (Applegate) while hiding the terrible secret that she accidentally killed Jen's husband, Ted.  Judy, of course, has her own baggage – five miscarriages that lend to her fiancé, Steve (James Marsden; Sonic The Hedgehog) to break up with her.  Throughout the first season, Judy fights her own conscience, while living Jen's pool house (a.k.a Ted's music studio) and becomes part of the family helping Jen grieve, especially after she learns that Ted had been cheating on her.  As season one ends, Judy finally confesses to Jen who kicks her out, only to call Judy back to the house where Judy finds Steve floating dead in Jen's pool.

After patiently waiting an entire year, Dead To Me season 2 opens the morning after Steve's death with both women freaking out.  Over the next ten episodes their lives again intertwine and unravel leaving viewers to think, "if they didn't have bad luck, they would have no luck at all".  The first few episodes of Season 2 are seemingly outlandish, which will make fans want to roll their eyes at the absurdity of it all.  The middle episodes are rather mundane and uninteresting and only serve to lead up to the final few episodes that once again ramps up the intrigue.

Besides the terrific writing that makes Dead To Me so good, Applegate and Cardellini are the gems whose chemistry makes the show work.  It is no surprise that Applegate was nominated for a Golden Globe and a Prime Time Emmy among other awards but Cardellini has a few wonderfully unexpected arcs in this second season that not only offers more insight into her character but stretches her emotionally as an actor.  Supporting cast members also have their moments and, on par with season one, there are plenty of surprises to make you gasp along the way.

Netflix gives the audience high production value, a great cast and some excellent plot twists that  - even though they seem ludicrous – make you want to come back for more if for no other reason than to see what will happen next.  My only criticism might be that there is ALWAYS something going wrong for these two women and there were times where I wanted to yell at the television set "Give me a break already"!  Of course, that is part of what makes the show so enjoyable.  If you loved season one and are on board for the ridiculousness of it all,  there is just as much to like about season 2.