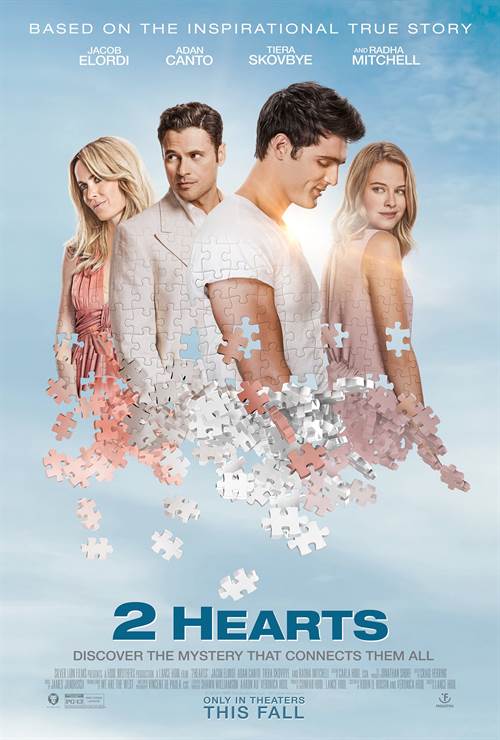 For two couples the future unfolds in different decades and different places, but a hidden connection will bring them together in a way no one could have predicted. Based on an inspirational true story, 2 Hearts is a romantic journey that celebrates life, love and generosity of spirit, and challenges audiences to believe miracles are possible. Charismatic young Australian actor Jacob Elordi (“Euphoria,” “The Kissing Booth”) plays Chris, a college freshman whose love for a spirited classmate played by Tiera Skovbye (“Riverdale,” “Once Upon a Time”) helps him find the purpose he has been searching for. In another place and time, Adan Canto (“Designated Survivor,” “Narcos”) plays Cuban exile Jorge, who falls for well-traveled flight attendant Leslie, played by Radha Mitchell (“Man on Fire,” “The Shack”). Though they were never meant to meet, fate has something entirely unexpected in store for both couples that dramatically changes the course of their lives.

Download 2 Hearts in Digital HD/4K from the iTunes store.


Win Tickets To See 2 Hearts At An Advanced Social Distanced Scre...  10/9/2020 12:33 PM EST
What happens when two strangers' lives intersect in the most unusual ways even if they live decades apart?  Based on a true story, 2 Hearts tells the tale of Chris (Jacob Elordi; Euphoria) and Jorge (Adan Canto; Designated Survivor), whose stories are intertwined.  The movie will open in theaters on October 16, 2020, but FlickDirect, in conjunction with Freestyle Releasing, wants to give some winn...  More>> 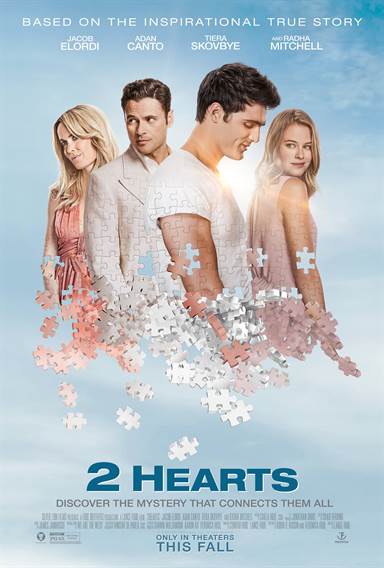 In the last thirty years, advances in technology have enhanced the lives of most of the world's population in various ways.  We now have faster and better ways to communicate, more advanced forms of transportation, and medical science has been able to find cures or treatments for many ailments, so people are now living longer than in the past. Included in this category are the advancements made in organ transplantation. Unfortunately, this often means someone has passed away and their organs are harvested to be used by doctors to save other peoples' lives.  Based on a true story, 2 Hearts offers some insight as to what happens when those organs are put to good use.

Christopher Gregory (Jacob Elordi; Euphoria) was a fun-loving, yet a mildly unmotivated teenager.  He started college and met a girl named Sam (Tiera Skovbye; Riverdale), who he was supposedly madly in love with – love, at first sight, some might even say.  Christopher saw Sam as his wife and the mother of his children - fantasies in Christopher's mind.  During his freshman year, though, an event involving Christopher, changed their lives, along with Christopher's family and friends' lives.  These events also put into motion plans that changed seven strangers as well.

Years before Christopher went to college Jorge Bacardi (Adan Canto; Designated Survivor), of the Rum empire, got on a plane to Puerto Rico where he met a stewardess (now called flight attendants) named Leslie (Radha Mitchell; Silent Hill).  Again, it was love at first sight and Jorge wooed and pursued Leslie until she finally married him.  While they were happy together, they soon discovered they couldn't have children due to Jorge's health problems.  These problems grew worse over time and by the time he was 64 years old, Jorge had probably less than a year to live.  One night in March of 2008, Jorge got a call and immediately flew to Jacksonville to receive a lung transplant…Christopher's lungs to be exact.

Elordi has been making quite a name for himself, choosing projects that showcase his youth, good looks, and acting skills.  His portrayal of the carefree yet devoted Christopher makes the audience want to be his friend and drink in his positivity.   Skovbye is equally as engaging and the two of them have excellent chemistry.  Canto and Mitchell tell a love story for the ages and have a connection that makes their romance believable.  The third couple that ends up having the biggest emotional impact in the film are Eric (Tahmon Penikett; Battlestar Galactica) and Grace (Kari Matchett; Code 8) Gregory, Christopher's parents.  These talented actors pack a punch that makes any parent mourn right along with them.

The story flip flops back and forth between the 1970s with Jorge and Leslie's story to the mid-2000s and Christopher and Sam.  While this might seem jarring it seems to work well thanks to some expert editing.  Of course, unless you know the real story, you think the story that Elordi is narrating is the truth, even when it seems implausible.  Discovering the truth though is heartbreaking and uplifting all at the same time.

After watching the trailer, I thought this film was more than an organ transplant story.  I thought Christopher was also sick and he and Jorge had some paranormal connection but in the end it a story about an organ donor and one of the seven recipients of a healthy 19-year-old's body parts.   Please don't think I take this subject matter lightly, as I have a close family member who has been on the receiving end of another human's organs (for which I am grateful), I simply thought the story was different from what it ended up being.