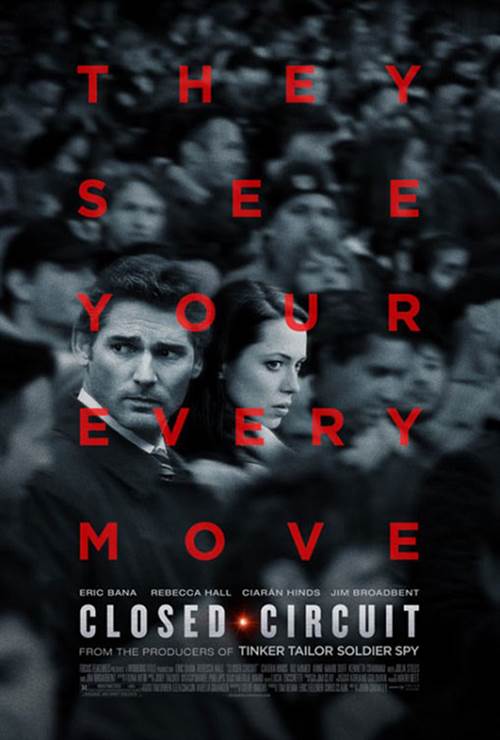 From the producers of TINKER, TAILOR, SOLDIER, SPY comes the new international thriller CLOSED CIRCUIT. Following a mysterious explosion in a busy London market, the police swoop in, a suspect is detained, and the country prepares for one of the most high-profile trials in British history. Two exceptional lawyers with a romantic past step into a dangerous web of secrets and lies, and when evidence points to a possible British Secret Service cover up, it’s not just their reputations but their lives that are at stake. The film stars Eric Bana, Rebecca Hall, Julia Stiles, and Jim Broadbent.

Stream Closed Circuit in Digital HD/4K from the AppleTV store. 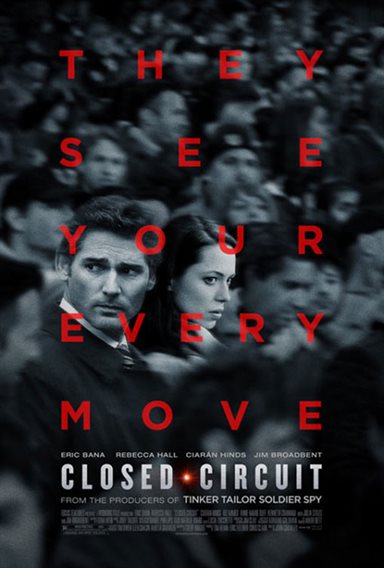 This cat and mouse thriller takes a startling twist as it weaves a tale of terrorism and trust in the film Closed Circuit.  The story rules the feature with compelling writing under the fine direction of John Crowley.  It plays out like a John Grisham novel with edge of your seat suspense and tense courtroom drama. The fine acting keeps the characters smart and intense on their way to the fascinating conclusion.

The story opens with a bombing in a London market where 120 people are killed with one suspect Farroukh Erdogan (Denis Moschitto) a member of a terrorist cell being apprehended.  The case gets turned over to the high court of England as done in acts involving terrorism. The crime bureau however, throws a wrench into the proceedings by providing classified evidence that only the Attorney General, the prosecutor and an appointed Special Advocate for the defense can view.

After a surprise death of the appointed defense lawyer Martin Rose (Eric Bana) gets the nod to defend Erdogan a case that has potential for earning Rose prominence.  Meanwhile the Attorney General (Jim Broadbent) chooses Rose's ex-girlfriend Claudia Simmons-Howe (Rebecca Hall) as the Special Advocate causing an upheaval between the two as they won't be able to communicate before the case goes to trial. While Claudia meets with the Attorney General in closed sessions deciding whether the secret evidence is just in the case for her defendant, Martin sets out to investigate Erdogan with the help of the Queen's Council Devlin (Ciaran Hinds).

Martin and Rose start to get mixed signals in the case with involvement by the government's MI5 division and the two take some very critical chances.  Director John Crowley (Is Anybody There?) keeps his audience in suspense as he unravels the mystery behind the terrorist plot.  Using some smart twists and misleading evidence he makes his characters dig deeper into the investigation.  Interweaving some taut action scenes upping the terror level he takes the pressure off the stuffiness brought on by the investigation making the film more enjoyable to watch.

Acting takes over the watch ability of the movie with Bana and Hall playing cat and mouse until they find out they have become targets in the process of their defense.  I like the characters they both portray.  Bana makes Martin Rose an uncompromising lawyer who will stop at nothing to get to the bottom of the crime.  While Hall's Claudia knows the consequences of her not being able to reveal the cards she holds, but takes more chances that lead her into a position of possible harm.  The two have great chemistry on the screen with their tit for tat performances.

Julia Stiles gives a nice supporting performance as New York Times reporter Joanna Reece.  She plays a pivotal role as the "message carrier" who exposes MI5 to their responsibility in the bombing.  Even though it's a character we've seen her do before, here she's the right choice as the pawn for the case reveal plot point. Jim Broadbent has his judicial character in hand showing the power of the Queen's court.  He makes the Attorney General a stubborn man who follows the letter of the law, but bends when he realizes there's more to the case than he understood.

If there is a downside to the film it's the familiar crime, trial, run for your life concept that's the hallmark of most John Grisham films like Runaway Jury, A Time to Kill and The Firm.  While the story here has a different kind of case it still has the same arc as most of Grisham's books and movies.  Also, in Closed Circuit writer Steven Knight gives away a major plot point a little too early making it somewhat predictable.

Closed Circuit has been rated R for language and brief violence.  The explosion in the film by the terrorist gets very realistic with the different camera angles so beware of this when deciding to bring immature children to the showing.