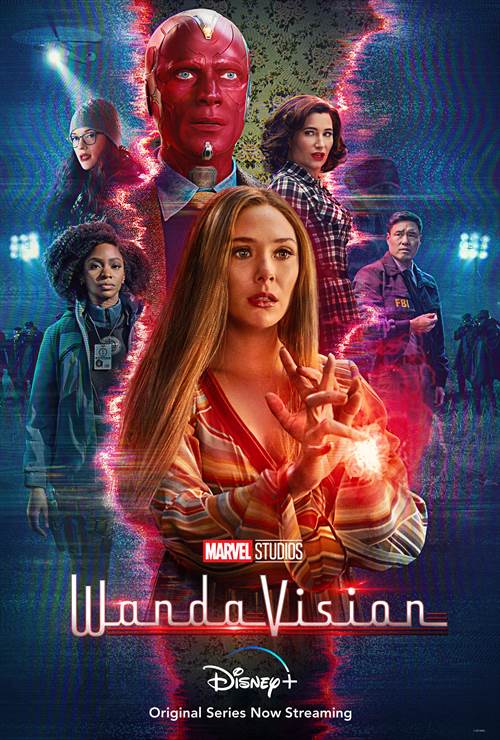 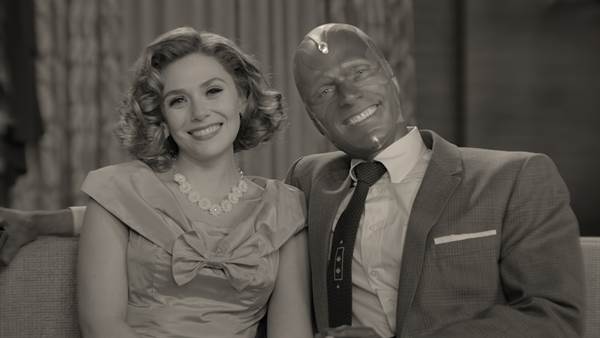 Welcome to WandaVision. Coming soon to Disney+. Marvel Studios' captivating new series "WandaVision" stars Elizabeth Olsen and Paul Bettany, and marks the first series from Marvel Studios streaming exclusively on Disney+. The series is a blend of classic television and the Marvel Cinematic Universe in which Wanda Maximoff and Vision—two super-powered beings living idealized suburban lives—begin to suspect that everything is not as it seems.

Listen to the WandaVision soundtrack on Apple Music.


Kevin Feige Discusses Future of WandaVision  2/24/2021 1:55 PM EST
Marvel Boss Kevin Feige announced that "WandaVision" doesn't have a second season in the cards just yet, but that the series will go straight into the "Doctor Strange in the Multiverse of Madness" film."I've been at Marvel too long to say a definite ‘No' to anything as far as a second season of WandaVision," said Feige. He added, "Lizzy Olsen will go from WandaVision to the Doctor Strange film."Fe...  More>> 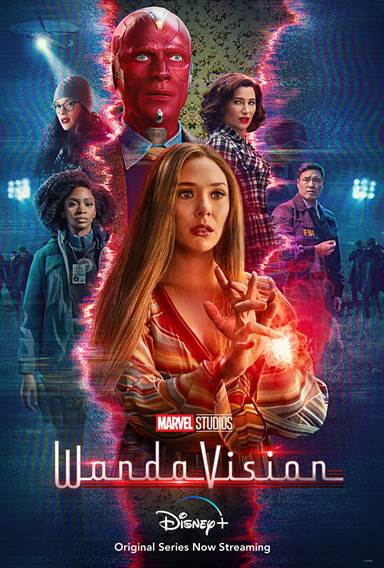 When Avengers: Endgame finally made its way into theaters in the Spring of 2019 fans had mixed reactions.  While they had waited ten years for the culmination of the twenty-three-movie saga and were excited to see how it would end, they were also sad because for ten years they had anticipated every MCU movie and character and suddenly it was all over…or was it?

In the summer of the same year, Marvel Studios unveiled the next "phase" in their timeline which not only included new movies starring Black Widow, Dr. Strange, and Thor but also five limited television series set to stream on Disney+.  The first of these highly-anticipated shows, entitled WandVision, will premiere this Friday, January 15, 2021.   The first two episodes will be shown, with a new episode released every week until March 5, 2021.

As one would suspect, WandaVision focuses on the Scarlet Witch/Wanda Maximoff (Elizabeth Olson; Godzilla) and Vision (Paul Bettany; A Knight's Tale), and the first two episodes, appearing in black and white, feel similar to classic sitcoms such as I Love Lucy and Bewitched.  There are humorous moments that include PG rated jokes and heartwarming sentiments that remind older generations of bygone eras when things seemed so much simpler.

From sneak peeks that are currently available, it seems later episodes in the season will be moving through the decades with cast and crew altering the wardrobe, hairstyles, demeanor, and surroundings.  So far it is a fun stroll down memory lane, but I can't wait to get to the decades I have actually lived through (calling all leg warmers!).

Episode one establishes Wanda and Vision as a happily married couple moving into their first home together during the 1950s.  Of course, they still have their powers which makes things for them a little easier, but they lack some of the knowledge necessary to not stand out in a negative way (as is usually the case with individuals who time travel)

As expected, the production values are excellent, and the writing is solid, even cheeky at moments, and witty.  Olson and Bettany have wonderful chemistry that serves as the backbone of the series.  Series regulars Kathryn Hahn (Bad Moms), Teyonah Parris (If Beale Street Could Talk), Kat Dennings (Thor), and Randall Park (Fresh off the Boat) round out the cast well bringing a wealth of experience and great comedic timing.

Of course, nothing is really as it seems to be In the Marvel Universe, and by the end of the second episode the audience is "aware" there is more going on than meets the eye.  Wanting to know what is happening, is the "hook" that keeps the audience interested and coming back.  Hopefully, it will be worth it by the end of episode nine.

Quirky, cute, and entertaining, plus at only 30 minutes of your time each week, WandaVision is a must-see, especially if you are a fan of the MCU and plan to see the second Doctor Strange film.  I'm told if you don't watch WandaVision you won't understand what is going on in that movie.