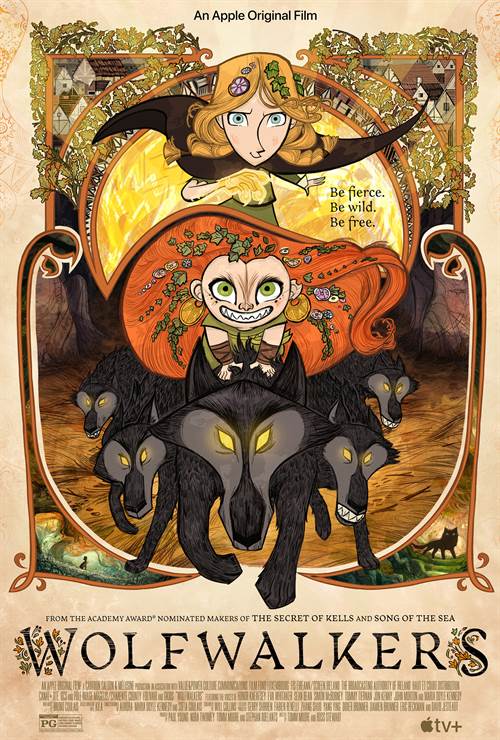 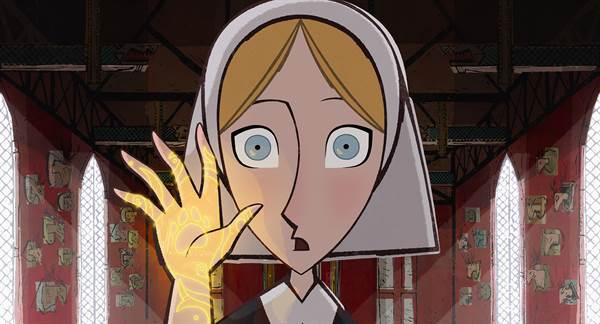 In a time of superstition and magic, a young apprentice hunter, Robyn Goodfellowe, journeys to Ireland with her father to wipe out the last wolf pack. While exploring the forbidden lands outside the city walls, Robyn befriends a free-spirited girl, Mebh, a member of a mysterious tribe rumored to have the ability to transform into wolves by night. As they search for Mebh’s missing mother, Robyn uncovers a secret that draws her further into the enchanted world of the Wolfwalkers and risks turning into the very thing her father is tasked to destroy.

Listen to the Wolfwalkers soundtrack on Apple Music.


The Creative Minds Behind Wolfwalkers Discuss The Thought Proces...  12/15/2020 8:36 PM EST
"[It} was something consciously cooked up by Ross (Stewart; Paranorman) and myself…We wanted to make a third film in this trilogy of films that started with the Secret of Kells", explains Producer/Director Tomm Moore.  "Ross and I made a list of things in a notebook…that we were passionate about…species extinction and habitat destruction and we talked about the time period, 1650's in Ireland that ...  More>> 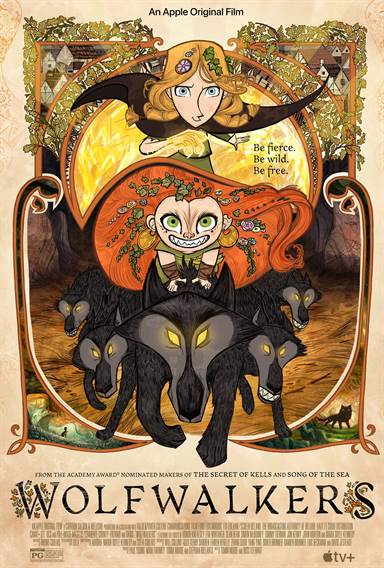 In an age of Pixar/Disney/Illuminations computer-drawn animation, it's difficult to imagine "old school" hand-drawn feature films.  They are time-consuming and one wrong stroke of a pen could mean throwing out a drawing and starting all over again.  They also don't have the same level of precision or coloring that a computer can almost certainly create and the level of detail is usually not as sharp for the obvious reasons mentioned above.  So, when Cartoon Saloon and Melusine Productions teamed up to make Wolfwalkers, streaming now on AppleTV+, I wasn't sure what to expect.  What I got was an amazing tale, beautifully animated, and full of wonder and hidden meaning.

Robyn Goodfellowe (Honor Kneafsey; Miss You Already), was a young English girl who moved to Ireland with her father Bill (Sean Bean; Game of Thrones) after he was hired to hunt and kill the wolves that lived in the woods outside the village.  Wanting to be a hunter as well, Robyn disobeyed her father (and the "Lord Protector" [Simon McBurney; Tinker Tailor Soldier Spy]) and went outside the gates to hunt the wolves.  Unfortunately, she accidentally shoots her bird, Merlin, sees the wolf take her pet, and follows to get Merlin back.  She then gets caught in a trap and when one of the wolves shows up and tries to free her, Robyn gets bitten.

That night Robyn, despite being "healed", has an "out of body experience" only to discover she is a "wolfwalker", just like the wolf, Mebh (newcomer Eva Whittaker) who had accidentally bitten and supposedly healed her earlier in the day.  Robyn not only gains a new understanding of the wolves but actively tries to save them against her father and the soldiers who are ordered to kill them.  Ultimately, the wolves prevail and Lord protector, as with most children's stories, gets what he deserves.

Folklores, by nature, tend to be wonderful and creative with mystical creatures and often include a message or a lesson to be learned.  Wolfwalkers is all of these things and then some.  The lessons, of which there is more than one, are not overly preachy but make an impact, none the less.  They showcase the ever-present conflict between man and nature, looks at organized religion, and focuses on family and duty. Interestingly, these themes play out as seen through the eyes of a young girl (well really two young girls if you count Mebh).

The vocal talent is well cast, though Whittaker is difficult to understand at times due to her heavy Irish brogue.   Kneafsey has a softer tone to her voice making her dialogue generally rather melodic.  Bean's voice is easily identifiable, seeing as how he is the most famous of the cast and his deep, calming tone is both authoritative and disarming all at the same time.  McBurney offers a gruffness to his character which is fitting of the Lord Protector's personality.

The animation is superb and quite a feat considering much of it is hand-drawn.  The stylized difference between the wolves and the soldiers is obvious with the former drawn as fluid and curvy while the latter have harder, sharper edges.  This helps to give the audience a sense of distinction between the two "packs" (for lack of a better word).  The color palette is kept mostly towards darker tones except when Mebh and the wolves are using their "magical powers", at which time the screen lights up with a warm and golden glow.

The animation is impressive and, while it takes a little getting used to in today's world of practically perfect, computer-generated art, it is just as satisfying as the bigger budget movies.  Hand-drawn animation is less popular in today's society, but it still has its place, and exposing younger generations to this art form is a necessity in my book.

Wolfwalkers brings together an old tale, an age-old debate, and a skillset that fewer and fewer people possess.  It is magical on numerous levels and can be enjoyed by multiple generations of families.  Definitely a worthwhile viewing this holiday season.