On one incredible night in 1964, four icons of sports, music, and activism gathered to celebrate one of the biggest upsets in boxing history. When underdog Cassius Clay, soon to be called Muhammad Ali, (Eli Goree), defeats heavyweight champion Sonny Liston at the Miami Convention Hall, Clay memorialized the event with three of his friends: Malcolm X (Kingsley Ben-Adir), Sam Cooke (Leslie Odom Jr.) and Jim Brown (Aldis Hodge). Based on the award-winning play of the same name, and directed by Regina King, One Night In Miami… is a fictional account inspired by the historic night these four formidable figures spent together. It looks at the struggles these men faced and the vital role they each played in the civil rights movement and cultural upheaval of the 1960s.  More than 40 years later, their conversations on racial injustice, religion, and personal responsibility still resonate.

Listen to the One Night In Miami soundtrack on Apple Music.

One Night In Miami images are © Amazon Studios. All Rights Reserved.


Be One of The First To See One Night In Miami  1/7/2021 9:48 PM EST
Many of you know of Regina King (If Beale Street Could Talk), the Academy Award-winning actress, but how many of you know she has directed numerous television shows?  Well if that comes as a surprise, you will be as equally shocked to know she has just directed her first feature film, ONE NIGHT IN MIAMI.  The movie, based on true events from 1964, has been winning awards on the film festival circu...  More>>

One Night In Miami Theatrical Review 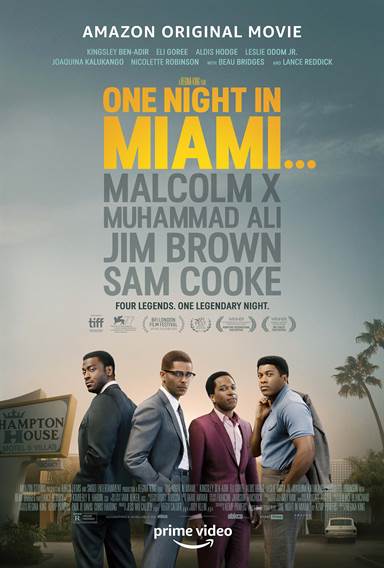 Four, young, black men walk into a room…it may sound like the beginning of a joke but, in fact, it is the foundation for Regina King's (If Beale Street Could Talk) directorial debut, One Night in Miami.  Inspired by true events, the film brings together four Iconic Black men who, in the midst of the Civil Rights movement, wielded great influence while still remaining somewhat powerless.  Based on a play of the same name, it imagines what these four famous individuals would discuss while eating vanilla ice cream in a room at the Historic Hampton House Motel in Miami.

February of 1964, a young boxer named Cassius Clay (Eli Goree; The 100) a.k.a. Muhammad Ali surprisingly beat Sonny Liston to become the World Heavyweight boxing champion.  In the building, that night, Clay's friends, activist Malcolm X (Kingsley Ben-Adir; The Commuter), Singer Sam Cooke (Leslie Odom, Jr.; Hamilton) and professional football player Jim Brown (Aldis Hodge; Straight Outta Compton), were there to cheer him on and to help him celebrate afterward – or so they thought.  Arriving at Hampton House Motel, each man is brought to Malcolm X's room and once he returns, he informs them they will be celebrating through reflection.  It becomes immediately clear Malcolm X has his own agenda.

Throughout the film we see what has molded these men into the individuals they eventually become, along with their conflicting views as to how to deal with segregation, religion, and the growing violence happening around them.  Malcolm preaches while trying to convince Cassius to officially announce his conversion to the Nation of Islam and berating Sam for kowtowing to the white men of the music industry.  Jim rounds out the group as the calm, cool-headed member of this quartet.  As each of them come to see the other person's point of view that night, we learn how each of them was influenced by one another.

King offers an intimate view of this fictional, fated evening while also offering the audience a broader view of the country at that time.  I am certain that, while this is her first foray into directing, that it definitely won't be her last. She has a keen eye for lining up shots that envelope the atmosphere while focusing on the actors.  Her passion for this project comes through in every scene and that is part of what helps the audience connect with the film.

The four actors chosen to portray Malcolm X, Ali, Cooke, and Brown are extremely talented, which is necessary to convince the audience they are, in fact, real-life icons from the 1960s.  Ben-Adir has the physical stature and the presence of the civil rights leader, while Goree embodies the confidence/cockiness that Ali was known for.  Hodge, while physically intimidating, brings a quiet gentleness to his performance.  Finally, Odom, Jr. is the perfect choice for Cooke, not only because he has a soulful voice infused with emotion but because he can also emulate Cooke's mental savvy and lively and electric excitement.

The script rivals anything Aaron Sorkin could produce which is both good and bad.  The words are intelligent and well placed but there are times when the dialogue becomes "preachy".  The movie starts off slow but picks up the pace in the third act. I also take issue with the fact that the film depicted Malcolm X as a peaceful man when it is well documented that his words overflowed with hate speech against white people and rather than attempt to end segregation, he promoted it in any form (think violent) necessary.

While One Night in Miami has quite a bit going for it and I can see it being nominated for at least one Oscar, it also has flaws that are hard to overlook.