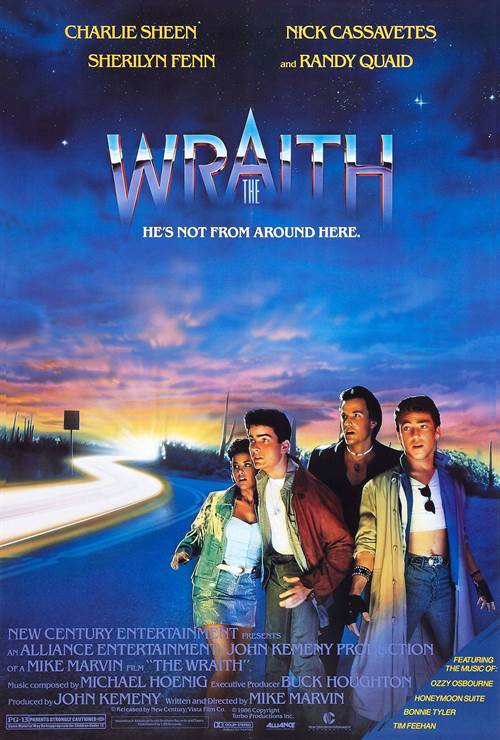 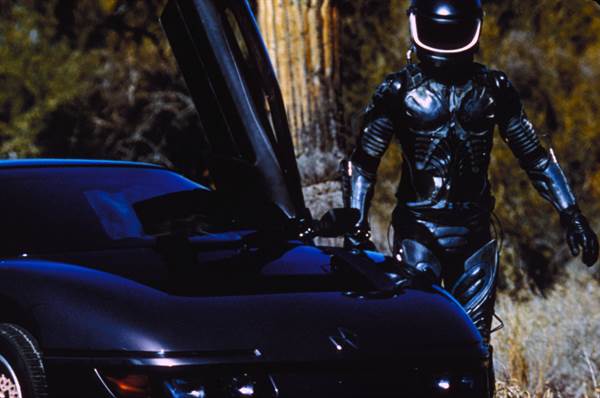 Charlie Sheen, Nick Cassavetes, Sherilyn Fenn, and Randy Quaid star in this turbocharged cult classic! When four glowing orbs crash into each other over the Arizona desert, they leave in their wake a badass Dodge Turbo Interceptor — and its enigmatic, helmeted driver. The next day, the mysterious Jake (Sheen) appears in the town of Brooks, catching the eye of Keri (Fenn) and the ire of Packard (Cassavetes), the ruthless leader of a gang of street racers. When gang members start losing races — and lives — to the Interceptor, the recent death of Keri’s boyfriend suddenly seems connected to the arrival of Jake, the unbeatable car…and an avenging entity called The Wraith.

Stream The Wraith in Digital HD/4K from the AppleTV store.

The Wraith images are © Lionsgate. All Rights Reserved. 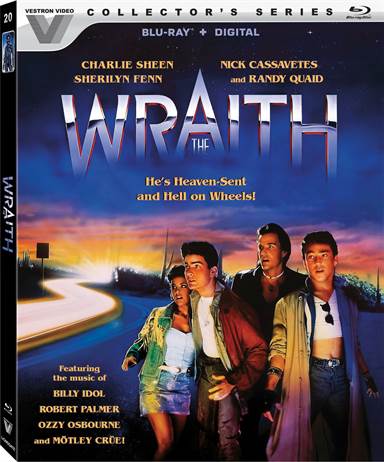 A Long time ago, in a galaxy far far away, in a land devoid of Tiger's blood and Adonis DNA, Charlie Sheen was an up-and-coming actor. Before Platoon hit, and helped to propel his career, he starred in The Wraith! Lionsgate, through its imprint, Vestron Home Video, releases another, seldom sought after, but still a decent amount of fun, genre-bending release. Is it Horror? Is it Sci-Fi? Is it an action film? The answer is a resounding YES.

A high-school hero returns from the dead to take revenge against the psychotic drag racer who killed him. The murdered boy transforms himself into a hi-tech spirit in black leathers and sets out to do battle with a gang of desert-based car thieves led by the man who destroyed him.

The Wraith was one of those genre films that I watched on Cable TV, repeatedly. Mostly because that is what we did at the time but secretly, to watch Sherlyn Fenn in a bikini or nude. However, as a fan of muscle cars and Mad Max-esque chase scenes (ok, maybe not as intense as Mad Max), I grew to enjoy this low-budget piece of celluloid, if for what it aspired to be, more than its actual achievements. That being said, there's a lot going on in this movie. Some of it comes across as a supernatural modern western; when a stranger rides into town, Charlie Sheen's horse is replaced with a motorcycle, and the band of desperados is a low-budget ring of car thieves. The local losers prey upon unwitting drivers, they are forced to race and potentially lose their car, or be beaten within an inch of their lives.

The titular bad guy, Packard Walsh (Nick Cassavetes) is the lunatic in charge and is smitten/obsessed with Keri Johnson (Sherilynn Fenn) and he has and will continue to stop at nothing to ensure that no one else can ever have her. So, the drifter rides into town, and bad things begin to happen to Packard's gang (it's always great to see Clint Howard in a movie), which is a good thing for the rest of the town. Investigating the recent "accidents" involving Packard's men is always interesting, Randy Quaid, who delivers a pretty low-key acting job here, as the town's out of his depth constable. Who did, by all accounts, a pretty lousy job of uncovering who killed Keri's boyfriend, and still can't seem to figure out who's killing the gang of local toughs. The supernatural elements are not explained in this movie, which is a major flaw in the story, but it can be excused by the entertaining car chases, as well as the funny, over-the-top interactions between Cassavetes and his dumb-as-rocks gang. With names like Rughead, Skank, and Gutterboy, what do we expect?

On to the visuals. This release is a solid MPEG 4 1080P, 1.78:1 ratio and it looks great. I was pleasantly surprised at what a great job they did on the restoration. The 80s are in full swing in this film - colorful clothes and the daytime sequences look bright. The fine details on the clothes and even the vehicles are particularly impressive, not to mention the cool look of the black leather outfit on The Wraith, himself. The nighttime shots are not bad, but some scenes suffer from a bit of graininess; however, I really appreciate the work that was done on this movie, especially considering this was released pre-CGI, and all the effects are practical or, like in the beginning of the movie, animation showing the creation of the Interceptor, with lights flying around the desert roads, to merge as one, to form The Ghost Car or The Wraith.

The audio is also a robust DTS HD master audio track which suffers a bit from lack of surround, especially since there's a ton of action, car chases, and explosions, I wonder how much more immersive it could have been. The dialog is upfront and never lacks in quality, and there's no complaint with the rest of the special effects. Finally, the soundtrack provides a Horns-up, driving beat, with bands like Ozzy Osbourne, Motley Crue, Billy Idol, and even Robert Palmer and more. The 80s are in full swing on this one. It is definitely a lively accompaniment to the non-stop action.

Now, we all know how much I love the Special Features and Vestron did a solid job of the extras, with 2 Audio Commentaries with the Director and the other with 2 of the actors, not Charlie, Nick or Sherilynn! Which was a bit disappointing. Some of the highlights were, Tales from the Desert, Ride of the Future, which talks about the Interceptor, the Ghost car, and the various filming locations.

There's a lot to like with this release, it may not have made a huge splash upon its release, but I think the filmmaker deserves some credit for coming up with a new take on an old premise, revamping the chase movie, and adding the touch of the supernatural, too. Of course, due to the overabundance of Tiger's Blood, the hero is bound to get the girl, kill the bad guy and destroy his car. I do have one question though, when a car blows up, why does all of Packard's clothes disappear except for his underwear? It must be due to the Adonis DNA coursing through The Interceptor's fuel injectors!