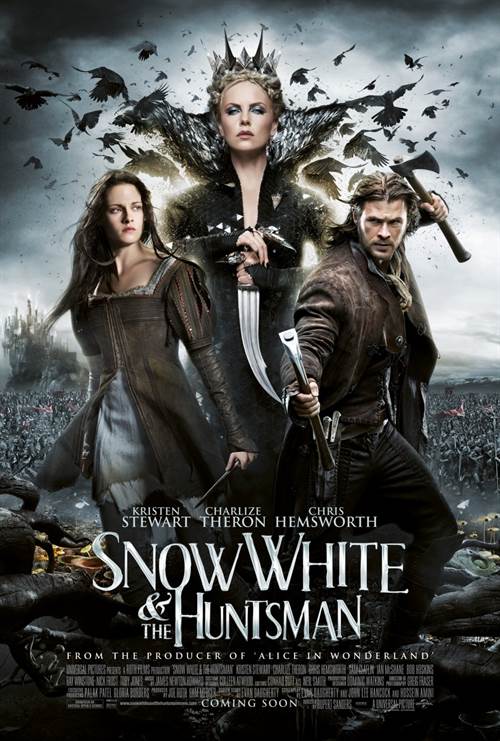 Snow White and the Huntsman Synopsis 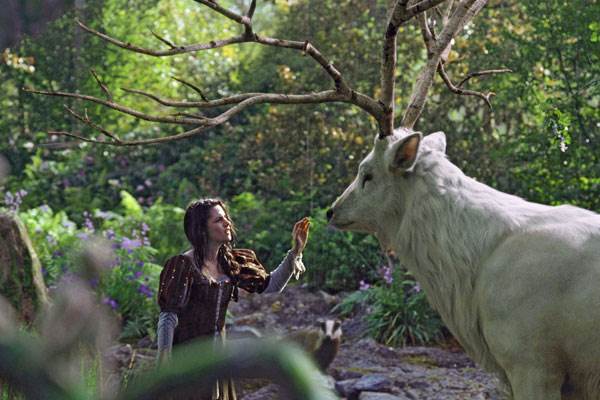 In the epic action-adventure Snow White and the Huntsman, Kristen Stewart (Twilight) plays the only person in the land fairer than the evil queen (Oscar(r) winner Charlize Theron) out to destroy her. But what the wicked ruler never imagined is that the young woman threatening her reign has been training in the art of war with a huntsman (Chris Hemsworth, Thor) dispatched to kill her. Sam Claflin (Pirates of the Caribbean: On Stranger Tides) joins the cast as the prince long enchanted by Snow White's beauty and power. The breathtaking new vision of the legendary tale is from Joe Roth, the producer of Alice in Wonderland, producer Sam Mercer (The Sixth Sense) and acclaimed commercial director and state-of-the-art visualist Rupert Sanders.

Stream Snow White and the Huntsman in Digital HD/4K from the AppleTV store.

Snow White and the Huntsman images are © Universal Pictures. All Rights Reserved.


Kristen Stewart Will Reprise Role in Snow White and the Huntsman...  11/19/2012 2:27 PM EST
Amidst rumors to the contrary, Kristen Stewart will be returning to the "Snow White and the Huntsman" franchise.  The "Twilight" star has signed on to reprise her role as Snow White, now the Queen.According to a Radar Online source, "The script has already been written and production will begin late next year. However, Rupert Sanders definitely won't be a part of the project. Rupert didn't want to...  More>>

Snow White and the Huntsman Sequel Talks Already In The Works  4/30/2012 10:01 AM EST
With over a month to go before Snow White and the Huntsman hits the big screen, it seems that a sequel may well be in the works.  There are reports that Universal has approached the highly respected David Koepp to scribe the second installment, which apparently has been on the table for some time and would center on the huntsman character played by Chris Hemsworth (Avengers, Thor).   Koepp who has...  More>>

More Dwarves Cast in the "Huntsman"  6/22/2011 9:56 AM EST
More casting news for "Snow White and the Huntsman". Yesterday, it was announced that Ian McShane would be portraying the leader of the dwarves in the upcoming film. According to Heat Vision, more dwarf roles have been cast.Currently in negotiations for the film are Eddie Izzard, Bob Hoskins, Toby Jones, Eddie Marsan and Steven Graham.In this film, all the dwarves are names after ancient leaders a...  More>>

Ian McShane Cast in "Snow White and the Huntsman"  6/21/2011 10:07 AM EST
The upcoming film "Snow White and the Huntsman" has added another to its roster. Ian McShane, who most recently starred in "Pirates of the Caribbean: On Stranger Tides", has been cast as one of the dwarves.McShane will be playing the role of Caesar, leader of the dwarves. The new take on the fairy tale will feature Snow White escaping from her evil stepmother with the help of a huntsman, who was i...  More>> 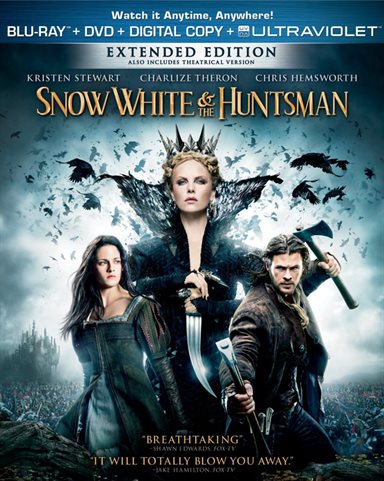 Snow White and the Huntsman, the latest re-imagined fairy tale out of Hollywood, has enough problems without dragging an actress' lapse in judgment and a first-time feature filmmaker's infidelity into the arena. Gorgeous and evocative as its visuals may be, Rupert Sanders' dark fairy tale is a sumptuous but fundamentally flawed fantasy picture that's essentially three or four different Snow White adaptations condensed into one ungainly epic.

The kingdom of Tabor has long been a realm of light and prosperity, ruled by the noble King Magnus (Noah Huntley) and the beautiful Queen Eleanor (Liberty Ross, Sanders' wife). When the queen succumbs to illness, though, Magnus is heartbroken; so heartbroken that he's easily manipulated into falling in love with another woman: the lovely and seemingly innocent Ravenna (Charlize Theron). But Ravenna isn't the angel she appears to be. She's a calculating immortal and powerful sorceress who kills the king on their wedding night slaughters his people, imprisons his daughter Snow White (Stewart), and claims the throne as her own. Under the reign of Ravenna, Tabor descends into chaos and darkness; an era of despair only threatened by the young Snow White, who comes of age, escapes into the Dark Forest, and discovers she alone has a heart pure enough to defeat the evil queen. With the help of a huntsman initially tasked with her capture (Chris Hemsworth), an exiled bowman and childhood friend (Sam Claflin), and a rough-n-tumble band of dwarves (Ian McShane, Bob Hoskins, Ray Winstone, Nick Frost, Toby Jones, Eddie Marsan, Johnny Harris, and Brian Gleeson), the fugitive princess has to mount a rebellion, reclaim her kingdom and restore Tabor to its former glory.

It comes as little surprise that Snow White and the Huntsman's script is credited to three screenwriters or that it's otherwise clever, smartly tweaked take on the classic Snow White tale is episodic and disjointed. There are distinct, oft-times jarring shifts in tone, pacing, and storytelling; so distinct that they should trigger an emergency message along the bottom of the screen. The first comes when the Huntsman is dispatched to the Dark Forest to track down Snow White, and not just because it literally takes all of thirty screen seconds to find the girl. (Keep in mind the queen required the Huntsman's services because it was too difficult for her soldiers to navigate the forest swamps. He takes note of a few footprints, walks in a straight line, and, voilà, there lies his frightened, snow-skinned prize. The queen's soldiers and brother even come along and have zero problems keeping up.) The first act of the film is mesmerizing, spellbinding even, bolstered by luscious visuals, stunning fantasy landscapes, and wondrous imagery.

For the next twenty-five minutes or so, it's an action piece, decent enough but seemingly the makings of an entirely different film. Along the way, a bridge troll (lifted from a Guillermo del Toro sketchbook) steals the show, Stewart's beauty evolves from sleepy to pouty, and Hemsworth remains the sole source of charm and charisma. (Love and passion are still, and ever, in short supply in Sanders' Snow White.) Then the dwarves enter the fray and they're fantastic, they're funny, they're loyal to the end. And they're played with gusto by the likes of McShane, Hoskins, Winstone, and Frost; an ingenious and, thanks to practical and digital trickery inspired by Peter Jackson and company, a convincing dwarven ensemble if there ever was one. They just don't quite fit in the tapestry Sanders unfurls in his first act, or even thrill in battle later when they take to leaping about like trained ninjas and running through the thick forest underbrush as quickly and nimbly as Hemsworth and Stewart. Their arrival also precedes the film's most colorful sequences, which don't feel out of place so much as they occasionally stumble into CG-animated cartoon territory. Fairies crawl out of bird bellies, tortoises and snakes are covered in moss, and the film briefly begins taking its cues from Legend's unicorn encounter. There are other dramatic shifts -- Snow White's climactic siege of the queen's castle is as bloodless as a PG-13 fare can amass -- and the ending is so abrupt and sunny, without any sense of narrative closure, that it disappoints and underwhelms altogether.

On Blu-ray today, the film comes loaded with a number of extras besides a theatrical and extended version of the movie. Visuals and audio are stunning, especially the heavy CGI sequences, which are abundant in the film. The 131-minute extended edition doesn't offer an abundance of new scenes, but those it does are in keeping with the tone and aesthetic of the film. As for extras, there is an audio commentary with the director, visual effects supervisor, and co-editor, behind-the-scenes interviews, and footage, another way to view the film is available once it has been downloaded to your tablet or PC.  A look at the film's sets as well as locations for certain characters humble abodes, interviews with cast and crew looking back on working together, the experience of the film itself, and their thoughts on the different variations of the character over the years. There is a segment on how they re-imagined the character for this movie; a look at all of the "citizens" of the fairy tale kingdom and finally another look at the visual effects of the film.

Try as you might, you can't help but be pulled out of the film every time Sanders' cameras would linger on Stewart's face a bit too long. But don't blame the director or the actress; the public and private hell they're going through at the moment is punishment enough. Blame the media frenzy surrounding their indiscretion. If our tabloid culture ceased to care about such things, perhaps we could watch Snow White and the Huntsman without a US Weekly photo dancing in the back of our brains. Still, it doesn't take a media circus to sully this Snow White. The film has issues of its own, chief among them its inconsistent tone and wildly uneven momentum. But if you're anything like this critic, you may be able to look past the film's flaws and soak in the gorgeous visuals Sanders has on tap. At the very least, the film is worth renting. You might even find yourself buying into Sanders' vision wholeheartedly and, in turn, buying a copy to add to your collection.