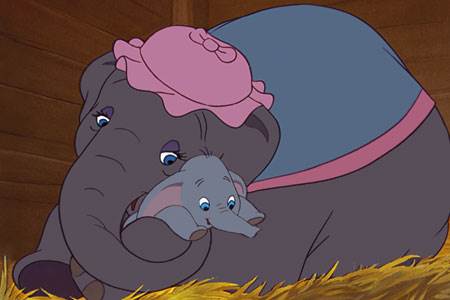 Dumbo is a baby elephant born with oversized ears and a supreme lack of confidence. But thanks to his even more diminutive buddy -- Timothy the Mouse -- the pint-sized pachyderm learns to surmount all obstacles. This vintage Disney classic earned an Academy Award for Best Score and an Oscar nomination for Best Song ("Baby Mine"). Other memorable musical gems include the "Pink Elephants on Parade" dream sequence, Walt Disney's ode to surrealism. 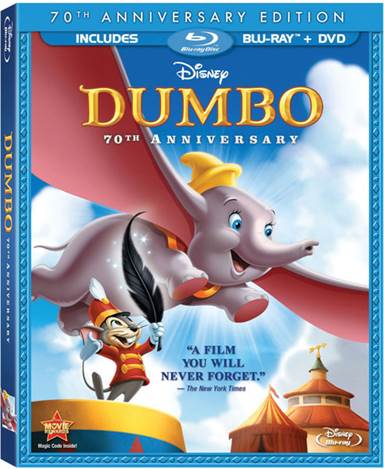 It is always interesting to look back on films of the past and marvel at what was accomplished with so few resources. Given what can be done today in the world of animation, it is beyond impressive to see what the animators could achieve with simple 2-D pencil drawings. Disney was the company that innovated animation and captured the minds of audiences through its heartwarming stories. Over the years Disney has released its classic tales onto Blu-ray and now Dumbo is the latest to receive the gold star treatment.

The tale of Dumbo is a familiar one in which we see a protagonist who was born with disadvantages overcome diversity and embrace what others consider a hindrance to achieve greatness. Dumbo takes place within a traveling circus and focuses on the animals that live within. Using a children's tale to explain the miracle of birth, we first see a group of storks flying through the sky carrying small bundles of joy to hopeful parents. Dumbo's mother, an elephant, is eagerly awaiting the arrival of her own child and finally the clumsy stork arrives. After a brief exchange the mother elephant unwraps her baby and shows him off to her fellow friends.

What comes as a surprise is that unlike most baby elephants Dumbo has exceptionally large ears and because of this he is the butt of many jokes from others. His mother, like all mothers, has nothing but love for him and could care less how he looks. Unfortunately after an accident during a performance the circus ringleader discovers Dumbo's misfortune and decides to capitalize on it by making him the star of the clown show. The only other friend Dumbo has throughout the film is a friendly mouse named Timothy who tries to help him overcome his obvious disadvantage. After a distressing altercation with some guests at the circus Dumbo's mother is locked up.

While attempting to sooth his distraught friend, Timothy winds up getting Dumbo intoxicated. Timothy winds up in the same predicament and they both find themselves experiencing the same hallucination of pink elephants dancing in front of them. Through this though they make a startling discovery, Dumbo can fly and once the circus discovers it Dumbo finds himself the world's greatest phenomenon. Watching this story unfold it is incredible the amount of work that went into it, the detail within the animation is startling and the musical score is beyond compare. What is interesting though is seeing the world that this film was made in. There are certain elements within the film that would definitely not survive in today's world.

The scene in which Dumbo and Timothy become intoxicated and experiences hallucinations is a perfect example; any parent today would be in uproar over a film exposing their children to such things. Of course one could also argue that children of that day saw the film and were no worse for wear after seeing it. Regardless of how you feel, the overall theme is obvious, regardless of where or how you were born it is possible to overcome your disadvantages and achieve greatness.

As mentioned before, the film finally has reached Blu-ray on a 70th Anniversary Edition. Packed on 2-discs it showcases an amazing amount of bonus features. On disc 1 is the film presented in high definition picture and sound. Along with that are several features that allow you to go deeper into the film with fun background information on the film. There is a making of documentary, audio commentary, a look at back at the famous Disney ride, deleted scenes and songs, art galleries, fun games, and two animated shorts. On disc 2 is the standard version of the film, and like on the first disc contains many of the same bonus features.

Even though Dumbo may not be considered the most famous of Disney's creations, it is always impressive to see the amount of love and attention that goes into the DVD's but what really makes Dumbo an impressive and heartwarming story is not only the theme of overcoming diversity but also the power of a mother's love for her child.