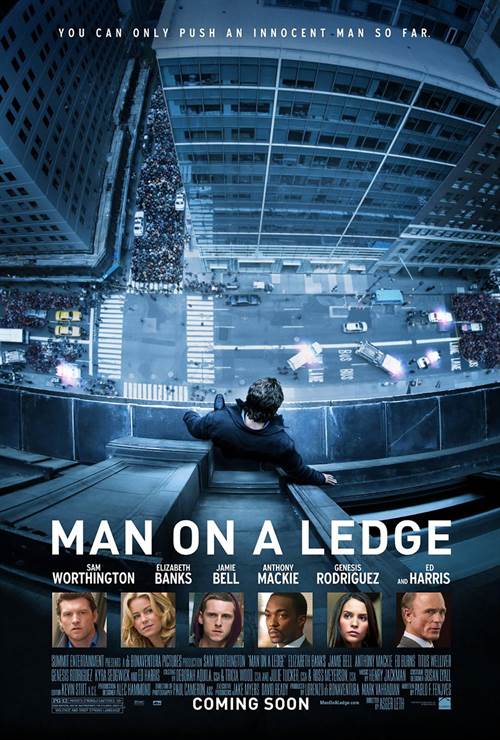 Man on a Ledge Synopsis

An ex-cop and now wanted fugitive (Sam Worthington) stands on the ledge of a high-rise building while a hard-living New York Police Department hostage negotiator (Elizabeth Banks) tries to talk him down. The longer they are on the ledge, the more she realizes that he might have an ulterior objective.

Purchase DVD/Blu-ray/4K UHD physical copy of Man on a Ledge today at Amazon.com

Stream Man on a Ledge in Digital HD/4K from the AppleTV store.

Man on a Ledge images are © Summit Entertainment. All Rights Reserved.

Man on a Ledge Theatrical Review 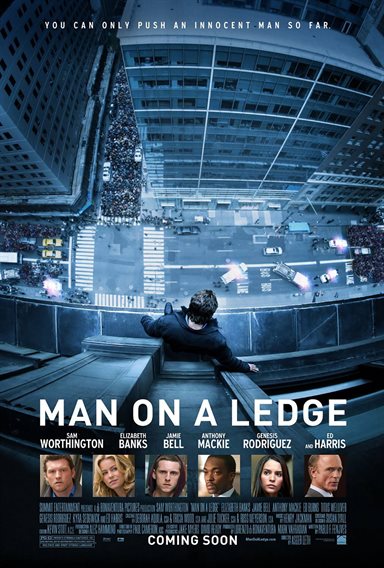 With an exciting beginning and suspense filled story Man on a Ledge entertains those that love a good thriller.  With very good performances and an action filled script that's nicely directed this year's box office should leap into high gear.

Ex-cop Nick Cassidy (Sam Worthington) escapes guards at his father's funeral and takes off on the lamb.  He makes his way to a high-rise hotel where he crawls out onto a ledge.  Police are called and negotiator Lydia Mercer (Elizabeth Banks) gets assigned to talk him down.  During her plea she finds out that Cassidy's an escaped con noted for the heist of a huge diamond from influential business tycoon David Englander (Ed Harris).  The suspense heightens when Cassidy professes his innocence and Englander tries to use his power to make sure the ex-cop jumps.

Banks does a good job as the negotiator that has to talk Nick off of the ledge. Her character recently lost a jumper and has some misgivings as to whether she can be successful.  A tough cop, but not knowing the complete situation she finds herself loosing complete control of her authority. It's cringing realizing how high she's stationed from the ground yet it's a real rush to see Banks startled expression when she steps out onto the ledge.

Actually shot 200 feet up at the Roosevelt Hotel in New York City, knowing this escalates the thrills throughout the main portion of the movie. Even if Worthington does not have fear of heights, it's still has to take a death wish to perform that high up on less than a two foot ledge. The stunts are outrageous with cops repelling off the roof, a jump from the ledge to a cop hanging by a tether and freefalling to the ground.  The film is loaded with exciting feats of daring, dangerous chases and a rooftop explosion.

The story takes on a lot of twits and turns, car chases, narrow escapes, a stealth burglary and a cunning ending that should surprise most. New director Asger Leth creates an exciting escape leading up to his main character ending up on a ledge high up over the city.  He gets the most out of the chase while building suspense as to why Cassidy chose to bring himself to the precipice of a lowly death.

Even when the excitement slows down there's always something before the camera like Genesis Rodriguez as the hot Angie who provides some awesome eye candy.  Her role as the accomplice during the attempted theft of a jewel shows her ability to work her viewers into an intense scene and then add a little levity during all the nervousness created.

FINAL ANALYSIS:  An exciting film that keeps the intrigue at a high level. (B)