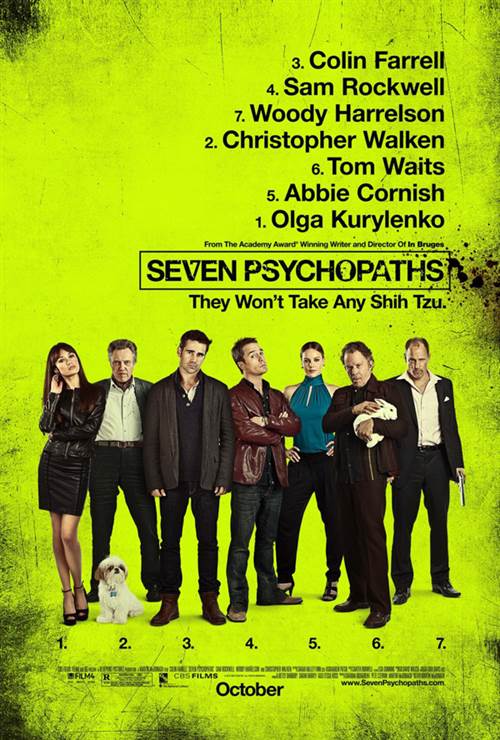 Stream Seven Psychopaths in Digital HD/4K from the AppleTV store. 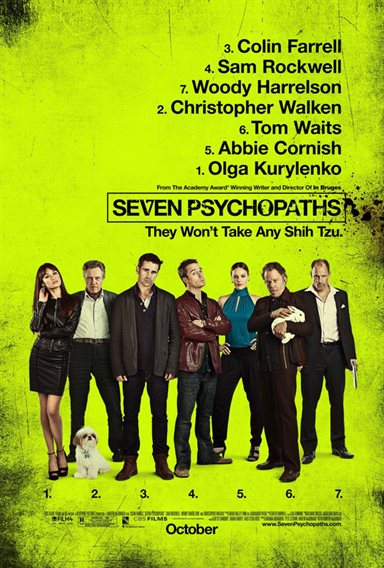 When you have a violent comedy your cast must have the ability to carry out the dialogue with dead pan and tongue-in-cheek precision, with Seven Psychopaths there's no doubt.  Much like the humor in Inglourious Basterds, In Bruges and most of the Grindhouse films, the script and actors fit the bill.  If you can deal with the bloody scenes and violence in this very funny tale of robbery and mayhem then this film's made for you.

The crazy story spools out something like this; Marty (Colin Farrell) has been literally at a loss for words writing his new screenplay so he goes to his best friend Billy (Sam Rockwell) an out of work actor for consolation.  Billy insists that he can help Marty and although skeptical he humors his friend by listening to his advice.  In the meantime to get income, Marty has been kidnapping dogs from rich owners and selling the pooches back to them with the help of his friend Hans (Christopher Walken).

In a wicked twist of fate Billy steals a Shih Tzu that belongs to Charlie (Woody Harrelson) a psychotic mobster who kills to keep his image intact. Hans tells Billy to give the dog back or Charlie will track him down with mortal results. But Billy doesn't see the problem as a deterrent, besides he loves the little hairy dog.  When he taunts the out of control Charlie and sets up a meeting with him in the dessert, Hans, Marty and Billy find themselves with their backs to the wall. After all, there's no honor among thieves so let the best psychopath win.

The film has very violent and sometimes chilling scenes that most action junkies view as merely a ‘gun fight' or a ‘kick-ass beating', but somehow director/writer Martin McDonagh makes it funny. Smart writing of director/writer Martin McDonagh (In Bruges) makes his characters hopelessly laughable, incredibly unaware, brutally vicious, cold hearted and ruthlessly vengeful most of whom exhibit all these excessive qualities at once. He puts them into situations that are so unfeasible and inapt that his audience is forced to laugh, even if it's just to let the person next to them know they understand it's not a reality show.

Ferrell, Harrelson, Walken and Rockwell are the perfect cast for the film.  Of course I'm a believer that anything that Christopher Walken (True Romance) and Woody Harrelson (The Big Lebowski) are in is a must see for me.  Their emotionless deadpan comedy (it's comedy you laugh at even if you don't know for sure that you should) top most all actors who have taken a chance at the tough acting skill.  Ferrell and Rockwell are upcoming comedians and show there brilliance in this film with displays of tongue-in-cheek humor (also called satire or serious laughter) using their facial expressions to reveal the punch line.  In Seven Psychopaths the four consummate actors put on a terrific show and make this dark comedy extremely funny.

Seven Psychopaths has been rated R for strong violence, bloody images, pervasive language, sexuality/nudity and some drug use.  While the reason for the rating does sound like that of a horror or terror move, you can trust me that it's really a spoof on serial killers and maniacal mobsters.  Oh! And somewhere laced inside this bizarre film is a story about a film writer who's along for an unwise ride.

FINAL ANALYSIS:  If your favorite films include In Bruges, True Romance or Pulp Fiction then it's a must see. (B)