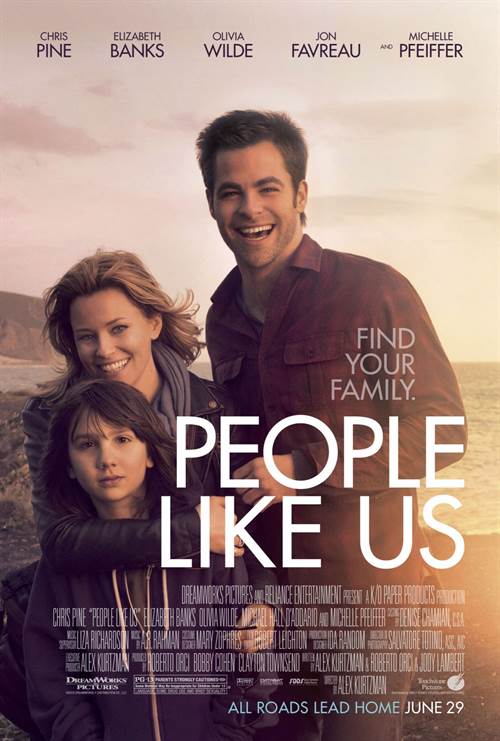 A drama/comedy about family, inspired by true events, starring Chris Pine (“Star Trek”) as Sam, a twenty-something, fast-talking salesman, whose latest deal collapses on the day he learns that his father has suddenly died. Against his wishes, Sam is called home, where he must put his father's estate in order and reconnect with his estranged family. In the course of fulfilling his father's last wishes, Sam uncovers a startling secret that turns his entire world upside down: He has a 30-year-old sister Frankie whom he never knew about (Elizabeth Banks). As their relationship develops, Sam is forced to rethink everything he thought he knew about this family—and re-examine his own life choices in the process.

Purchase DVD/Blu-ray/4K UHD physical copy of People Like Us today at Amazon.com

Stream People Like Us in Digital HD/4K from the AppleTV store.


Win Complimentary Passes To See An Advance Screening DreamWorks ...  6/5/2012 11:29 AM EST
DreamWorks Pictures will release the highly anticipated film, PEOPLE LIKE US, staring Chris Pine and Elizabeth Banks on Friday, June 29th, 2012 and for all you fans that are living in South Florida, we have a way for you to catch a complimentary screening of it early.   Just add FlickDirect to your circles on Google+, or follow us on Pinterest, and email contest@flickdirect.com with your mailing a...  More>> 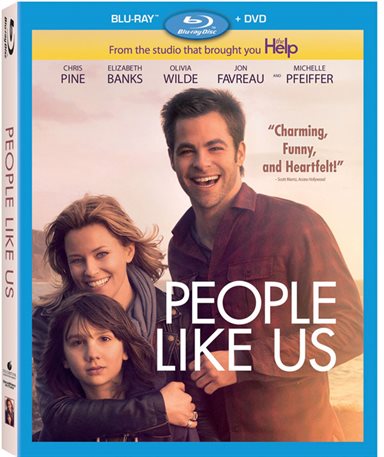 The inspirational film People Like Us has been released in a Blu-ray Combo pack with some very nice bonus features.  It's a good film with an emotional story that's well acted and directed.  A chick flick of sorts, the movie should have a high appeal from the 25 and older target market.

Inspired by a true story the movie finds down on his luck Sam Harper (Chris Pine) along with his fiancée Hanna (Olivia Wilde) reluctantly going back to the home where he grew up on the day after his father's funeral. Asked to meet with the family lawyer Ike (Philip Baker Hall), Sam gets handed a case containing $150,000.  The money isn't meant for him, however, he' instructed to bring it to a sister Frankie Davis (Elizabeth Banks) he never knew existed. Thus begins a complex tale of love, understanding, integrity, challenge and courage of convictions that's moving and heartfelt.

With Hanna confused by Sam's urgency to stay in his hometown, a mother heartbroken that her only son has been absent for so long, a new found sister that's perplexed as to why she feels drawn to a stranger (Sam) and Sam slowing digging a hole in his heart that may never be repaired, the story takes on a complex yet sympathetic tone that resonates throughout.  I like this kind of complicated story where you are the onlooker who knows what the real circumstances are and hoping for the best possible ending.

The story may be somewhat predictable, but the characters make the discovery enjoyable entertaining. Believable performances by both Pine and Banks make the story credible enough, touching and inspirational.  While Pine's Sam rambles about trying to make sense of the situation, Banks's Frankie has to deal with a young son (Michael D Addario) who causes difficulty at every turn due to an absentee father.  The three worlds collide causing an uncertain future in the eyes of the audience.  It's a very good script played out under the pin point direction of Alex Kurtzman who makes his entry into film on the big screen an admirable success.

You'll gain even more from the special bonus features included in the Blu-ray combo pack that includes both the Blu-ray and DVD.

Digital
Number One with a Bullet: The Story Behind "People Like Us"
Taco Talk: Extended Henry's Taco Scene
Deleted Scenes
Bloopers

FINAL ANALYSIS: Ladies, invite some of your friends for a night-in and have some tissues handy. (B)

Be sure to checkout out FlickDirect's interview with People Like Us star, Elizabeth Banks. 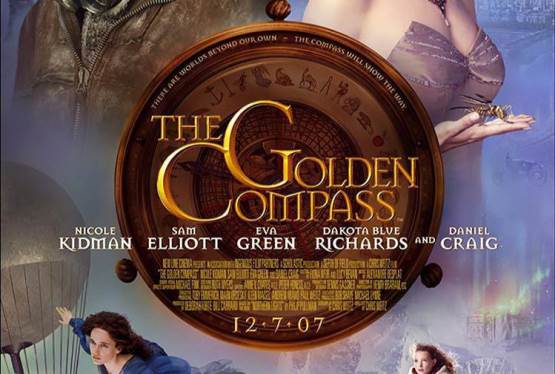