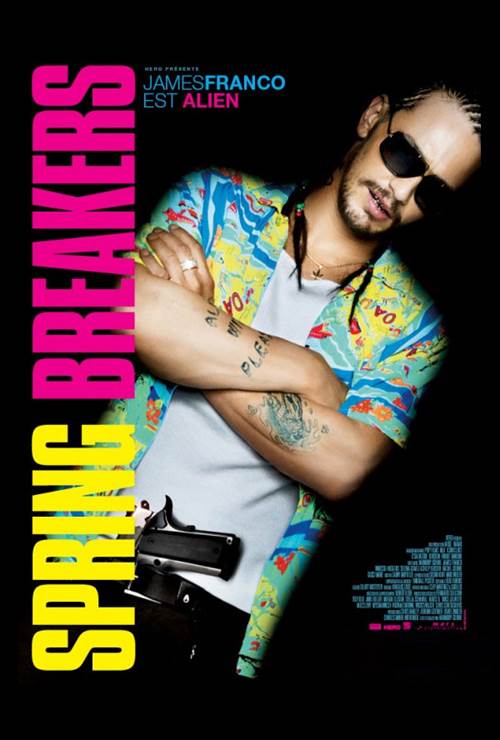 Brit (Ashley Benson), Faith (Selena Gomez), Candy (Vanessa Hudgens) and Cotty (Rachel Korine) are best friends anxious to cut loose on their own spring break adventure, but they lack sufficient funds. After holding up a restaurant for quick cash, the girls head to the shore for what they discover is the party of a lifetime. They’re thrown in jail — and quickly bailed out by Alien (James Franco), a local rapper, drug pusher and arms dealer who lures them into a criminal underbelly that’s as lurid as it is liberating for a close-knit gang of girlfriends who are still figuring out their path

Download Spring Breakers in Digital HD/4K from the iTunes store. 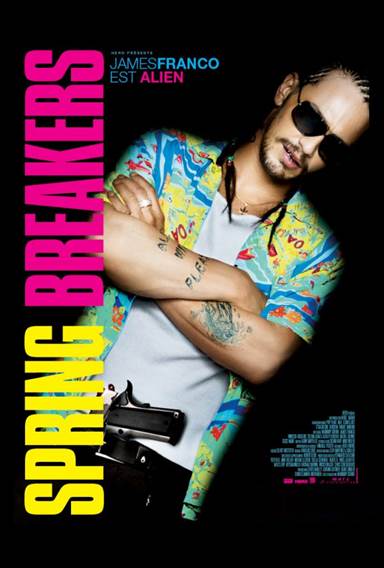 Glitz, glamor, gross, guns, and gratuitous nudity, violence, drugs and sex, that's the sum of the new film Spring Breakers in theaters this weekend.  While they bill the film as a comedy, there's not much of that and as for drama the acting's so poor it's more laughable than tragic. I will say that they did get something right for the target audience however, a lot of skin, sexual content, wild parties and copious drinking.  While I'm not a prude in any sense of the word, my assessment here for you guys and gals is to wait for the video so you can pause and rewind and not miss one moment of what you perceive to be ‘spring break'.

The weak story centers on four college kids, Brit (Ashley Benson), Faith (Selena Gomez), Candy (Vanessa Hudgens) and Cotty (Rachel Korine) who become best friends at the school they are attending.  Bored with classes, lack of boy toys and even doubting their faith, the quartet decides they need to get wild at spring break.  Only problem, they lack of funds for the trip. Problem solved when Britt and Cody come up with a plan to rob a diner taking the money from the register and the patrons.

Pedal to the metal and they find themselves in St. Petersburg Beach, Florida at a hotel brimming with wild guys and women who are bursting to show them and anyone around a good time.  Taking in the sun, the parties and basking in the frivolity of what they feel they have been deprived, the girls start looking for other kinds of thrills.  At a free concert they meet lead rapper Alien (James Franco).  The foursome gets arrested at a pot party and thrown into jail.  When Alien bails them out and offers them a wild lifestyle, things start spiraling down for the girls.

The film takes on a very dark mood with the four getting introduced to guns, gangbangers and a violent lifestyle.  From here on out the bikini clad coeds attempt to show their wild side, but Hudgens and Gomez are just not cut out for portraying baddies and even though Benson and Korine could look the part, they never come up (or should I say down) to that level. After all, who goes to a gunfight in a bikini anyway? For that matter who wears a bikini without a cover-up through 40 minutes of the film in jail, court, a gangbanger's dive bar, and at a shoot out.

The only comedy here comes with the unrealistic story, poor direction and anemic acting. But I guess that's not what most guys between the ages of 15 to 22 are interested in so the rest of this review will not mean very much to them.  However, those who may have the idea that they are going to see a wild spring break movie with the likes of Girls Gone Wild (video) or even National Lampoon's Spring Break (video) need to avoid this sketchy film and take in something that won't be a rip off.

Spring Breakers vacillates between wanting to be a crime story and a satire on gang warfare. While we see a bitter struggle between Alien and a gang leader who feels he's trying to move in on his territory, the film turns silly when Alien brings novice automatic weapon toting bikini babes to a home invasion that houses a group of armed gangbangers. I really don't want to go into the folly that happens next.

Spring Breakers has been rated R by the MPAA for strong sexual content, language, nudity, drug use and violence throughout. The movie shows no consequences for the girl's actions including murder. The film should also be sanctioned for using four fine upcoming actresses to entice moviegoers for a big box-office on the intimation they will be nude. (Glad to see Emma Roberts dropped out of the running for one of the girls.)

FINAL ANALYSIS: The film has very little value, even for those that want to see the eye candy. (F)