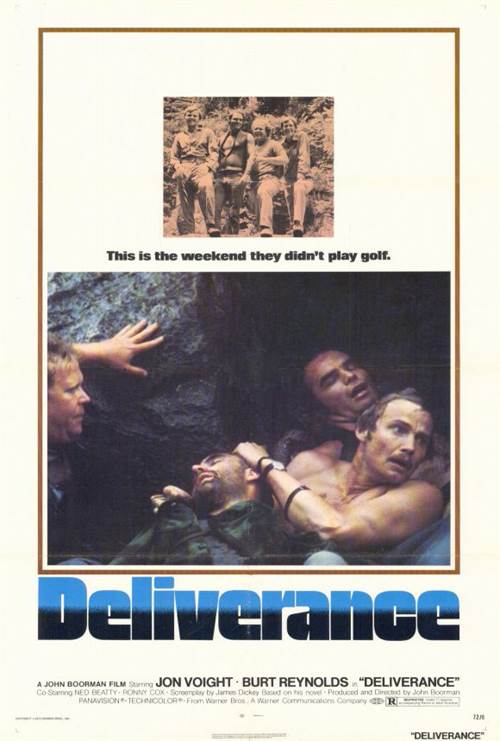 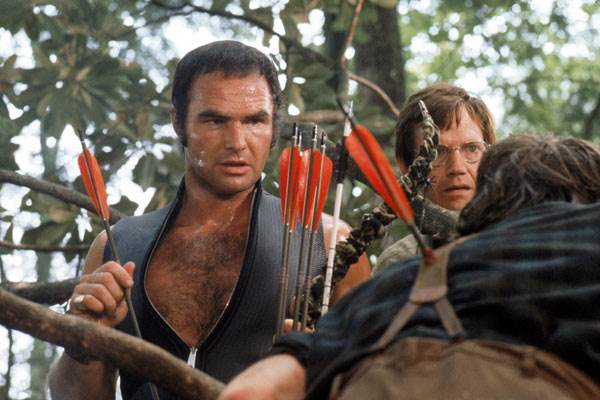 In the unfamiliar Appalachian backwoods, a weekend of male bonding for four inexperienced campers turns into a gut-wrenching fight for survival against the merciless forces of nature and the brutality of man. Their only escape is a terrifying canoe ride down the raging rapids of the Chattooga River. If their heartless pursuers don't kill them, the treacherous waters just might.

Stream Deliverance in Digital HD/4K from the AppleTV store. 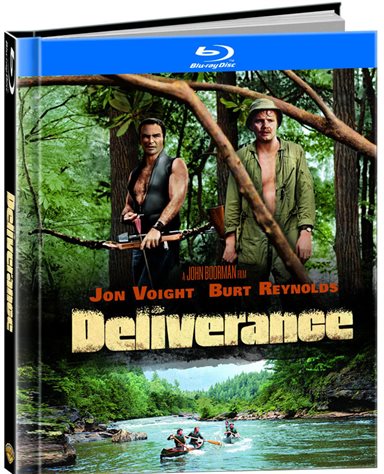 This is the weekend they didn't play golf. That's the tag line for a film that has seared itself into the minds of  a generation of fans. Deliverance has lasted for over three decades as lesson one of a Northerner's introduction to the South. Showing the backwoods and a laid back lifestyle, almost to the point of being inbred, those that have seen this film have had two scenes burned into memory (you know which ones). So now that it's out in high definition, what's it like to relive them?

James Dickey adapted his novel for the film which was directed by John Boorman. In it, four friends from the city (Atlanta) experience one last turn through the Georgia countryside. Lewis (Burt Reynolds, Boogie Nights), Bobby (Ned Beatty, Superman), Drew (Ronny Cox, Robocop) and Ed (Jon Voight, Heat) rough it over the river and through the woods, and encounter something that will change their lives forever.

Admittedly this film was hard to review, primarily because of the "Squeal Like a Pig" scene. It is not an easy scene to sit through. But if you get past that scene, what you find is a pretty suspenseful film that serves as a bit of a statement to the American wilderness, as technology incrementally takes over what was once a thriving, well-knit community.

What Dickey (and Boorman) does rather smartly in the film is first showing that the big threat of the film is nature itself. Thanks to the Georgia countryside, the exterior effectively dwarfs the men, showcasing their meekness to the elements. Often times in the film, some of the men feel threatened by things that are clearly not present, but because of what's gone on, what's to say that they're not out there? The other thing that's done to a lesser degree is to show the resentment of some of the townspeople to these "outsiders." Granted, you've got the "squeal like a pig" scene, but that's the culmination of the resentment. At the service station, the animosity between the locals and the out of towners isn't obvious, but is very much inferred, and the limited interaction between various locals and the foursome becomes subtly elevated, as the local folk throw some occasional sarcasm their way before they get to the river.

The performances in the film are much better than one would expect. Before getting injured, Reynolds' Lewis seemed to be the one closest to the dangers that the wilderness offered. Cox performs admirably, while Beatty steals the show, and not for the obvious reason. Voight gradually evolves into a transformed man from the early part of the film, and ultimately these four develop a chemistry that is almost poetic.

The film's look is soft and a little on the rustic side, but possesses moments where the image has some depth and almost looks like it did on the day of shooting, for sure. There's not really anything worth bragging about, but the "Dueling Banjos" score that appears throughout the film in various forms sounds pretty crystal clear.

Warner Bros has recently been re-releasing classic films from their vault in a "book-like" form containing pages filled with small trivia about the films, usually from the cast and crew. Deliverance has the same treatment, with special features to boot. Boorman provides a commentary track for the film that. "Deliverance: The Beginning" looks at the novel's conception and adaptation to film. "Deliverance: The Journey" recalls the production and filming of some of the memorable sequences, i.e., the dueling banjos scene and some others in the film. "Deliverance: Betraying the River" discusses the "squeal like a pig" scene in painful detail, with interview footage of McKinney and Beatty. Some other scenes in the film are covered as well with the relevant thoughts by the actors and director. "Deliverance: Delivered" talks about the ending of the film and the reaction of it since. "The Dangerous World of Deliverance" is an on-set featurette with interviews with Boorman and the cast as they talk about the production at the time.

Because the scenes have been so memorable over the years, millions of those living south of the Mason-Dixon line have had to deal with the stigma of a dueling banjo here, a sexually aggressive mountain man there. It's hard not to watch a movie like this and not get the feeling of it being dated, but if you're willing to patient you'll find that once you get past it, the story offers a depth of emotion that we rarely see these days in cinema, when actors pushed themselves to evoke a response in their audience and we, the audience, were awed by them.