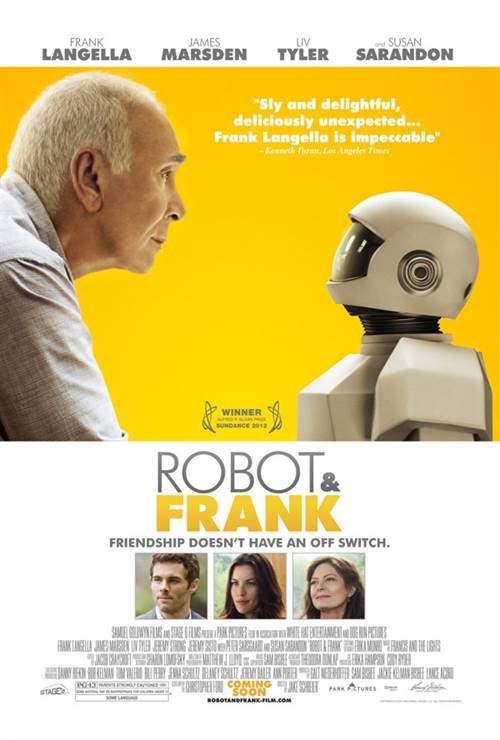 Set in the near future, Frank, a retired cat burglar, has two grown kids who are concerned he can no longer live alone. They are tempted to place him in a nursing home until Frank's son chooses a different option: against the old man's wishes, he buys Frank a walking, talking humanoid robot programmed to improve his physical and mental health. What follows is an often hilarious and somewhat

Stream Robot and Frank in Digital HD/4K from the AppleTV store. 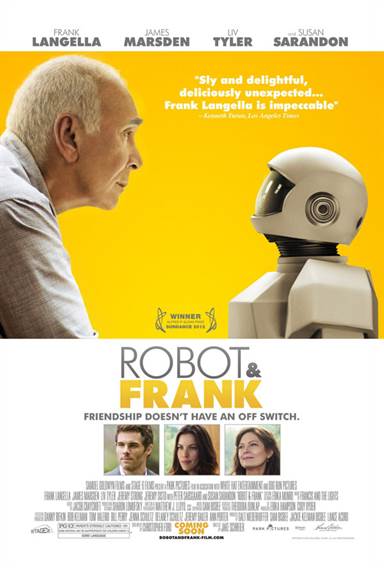 Even though Robot & Frank has some rough edges to smooth out, the film does produce a sweet bond between man and machine.  Finding this little gem at your local theater would be an opportunity to see some excellent acting with a cute little quirky storyline.

A retired cat burglar and jewel thief, Frank (Frank Langella) has been challenged by age and lives alone in his house. Concern that he has become very forgetful by his two adult children Hunter (James Marsden) and Madison (Liv Tyler) has grown and they decide to place him in an assisted living facility until they can figure out a better situation for him. After a change of heart, Hunter decides to give Frank a buddy, a walking and talking humanoid (voiced by Peter Sarsgaard) programmed to assist Frank in his everyday living so he can reside at home.  After much anxiety over the decision, Frank accepts the idea.  When he realizes that this may be the perfect gadget to get him back into his old business, things start getting out of hand.

The combative interaction between caretaker Robot and Frank gets really funny making the movie work.  Constantly nagging Frank, Robot thinks he has everything under control. Finally Frank accepts the idea of having someone around but only after coming up with a brilliant idea. The concept of having a cooperative robot as a partner in crime really plays out well between Langella and the humanoid that urges Frank to eat healthy and engage in a hobby.  Although annoying and repetitive Frank finally gets the upper hand tricking his caretaking Robot by turning a compulsory activity into a renewal of his five-fingered lifestyle.

The cute little comedy has a great cast that gets used well by novice director Jake Schreier.  He keeps his futuristic comedy light and fun even though it gets predictable.  He does a pretty good job with the drama part that interacts Tyler and Marsden with Langella showing the heartfelt concern for their dad who just couldn't keep his fingers out of the cookie jar.  He does, however loose the important personal touch when he mixes man with a machine. Here Schreier just doesn't show enough closeness between Frank and his newfound gizmo, loosing the heartfelt friendship that he tries to achieve in the finale.

Robot & Frank has been rated PG-13 by the MPAA for some language.

FINAL ANALYSIS: A good film with a heartfelt story. (C+)