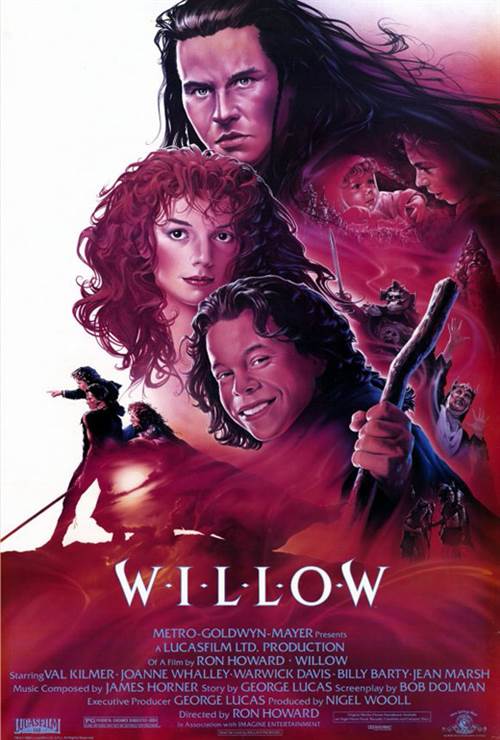 Journey to the far corners of your imagination with Willow, for the first time ever on Blu-ray! Now fully digitally restored, this release features a dazzling array of extras, including new, never-before-seen exclusive content. From legendary filmmakers George Lucas and Ron Howard comes a timeless fantasy tale in which heroes comes in all sizes...and adventure is the greatest magic of all. When young Willow Ufgood (Warwick Davis) finds an abandoned baby girl, he learns she is destined to end the reign of the wicked Queen Bavmorda (Jean Marsh). In order to protect the child, Willow must team up with a rogue swordsman (Val Kilmer) and overcome the forces of darkness in the ultimate battle of good versus evil!

Stream Willow in Digital HD/4K from the AppleTV store.


Jon M. Chu to Direct Willow Series for Disney Plus  10/20/2020 3:41 PM EST
Jon M. Chu ("In The Heights," "Crazy Rich Asians") has signed on to direct the upcoming  "Willow" series for Disney+. George Lucas' "Willow" is the epic fantasy adventure set in an age of swords, sorcery, myths, and monsters. The original film was released in 1988 and starred Val Kilmer, Warwick Davis, and Joanne Whalley. Davis will be reprising his role."Growing up in the '80s, ‘Willow' has had a...  More>>

Ron Howard Confirms Willow Series for Disney+  5/2/2019 10:38 AM EST
Ron Howard has confirmed that a Willow sequel series may be coming to Disney+. The director's 1988 fantasy film starred Val Kilmer, Warwick Davis, and Joanne Whalley. Howard made the confirmation while on the MTV podcast "Happy Sad Confused". "There are some really serious discussions going on with Jon Kasdan, who was one of the writers of Solo, who kept hounding me about Willow the whole time we ...  More>>

Enter To Win Willow on Blu-ray + DVD Combo Pack  3/14/2013 10:18 AM EST
Journey to the far corners of your imagination with Willow, for the first time ever on stunning Blu-ray!  Written and produced by George Lucas and directed by Ron Howard, the film tells a timeless fantasy tale in which heroes come in all sizes...and adventure is the greatest magic of all.  In celebration of its 25th anniversary, the unforgettable classic has been fully digitally restored and debut...  More>> 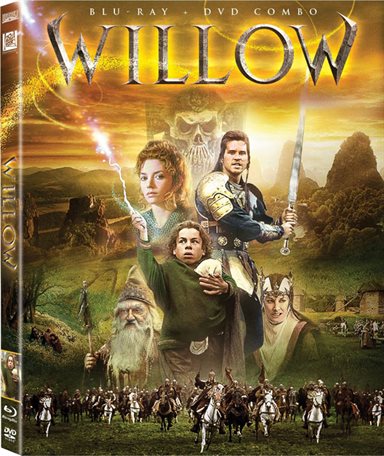 Before Peter Jackson's take on the Lord of the Rings trilogy, the closest J.R.R. Tolkien fans ever got to a live-action film adaptation of Middle Earth was 1988's Willow, which borrows heavily from the writer's alternate medieval universe. Besides dueling sorcerers, castle sieges, and trolls, both works feature diminutive heroes who heed the call of adventure, set out on uncertain quests to save the world, and return home as changed men. This is the archetypal hero's journey, of course, the dramatic arc favored by executive producer George Lucas, who devised Willow's story, having previously applied Joseph Campbell's monomyth theories to Star Wars.

Instead of directing the project himself, Lucas farmed it out to actor-turned-filmmaker Ron Howard, who was then coming off his success with Splash and Cocoon. The two worked with screenwriter Bob Dolman to flesh out the script, and together they created a film that wasn't hugely successful in its own day but has since become one of the most memorable cult kids' movies of the 1980s. Although it's not without its flaws—glacial pacing, some obnoxious side characters—Willow is one of those films that, if you grew up with it, always sticks with you. It's enveloping, sweet, and like a lot of kids movies from the era, surprisingly dark and violent.

Short-statured actor Warwick Davis—who got his acting start as Wicket the Ewok in Return of the Jedi—stars as Willow, a member of a hobbit-like race called the Nelwyns, who live in a shire-like hamlet far from the strife of the average-sized humans, or
Daikini. Willow is a lowly farmer who dreams of becoming a sorcerer's apprentice, and his destiny arrives when he discovers a baby, wrapped in swaddling clothes, floating down the river Moses-like on a grassy clod. His wife and two kids convince Willow to keep the child, Elora Danan, who—unbeknownst to them—is a Daikini princess, prophesied to one day ensure the downfall of the wicked Queen Bavmorda of Nockmaar (Jean Marsh), who's recently been on a Herod-like baby killing spree in a desperate attempt to keep the prediction unfulfilled.

When one of Bavmorda's snarling dog/boar hybrids descends on the town looking for the baby, village elder The High Aldwin (Billy Barty) orders Willow to travel with a band of fellow Nelwyns to the Daikini Crossroads and give Elora to the first human they meet. What Aldwin doesn't anticipate is that the first Daikini they come across will be the serves-no-master scoundrel Madmartigan (Val Kilmer), a disgraced swordsman and thief who's equal parts Aragorn and Han Solo. Madmartigan joins the quest reluctantly after the fairy goddess of the forest—a Galadriel-like Maria Holvöe—bestows upon Willow a magic wand and tells the pint-sized protagonist to 1.) find the white sorcerer Fin Raziel (Patricia Hayes) and 2.) deliver Elora into the safekeeping of the good king and queen of Castle Tir Asleen. To act as guides, the fairy sends along two of her "Brownies," 8-inch warrior nymphs who speak in bad French accents and, combined, are essentially the Jar-Jar Binks of the film. That is, you'll be glad when they're off-screen because they're generally cringe-inducing and unfunny.

Fortunately, the rest of the film has held up rather well. If Willow is a good fifteen minutes too long, it's at least the kind of slow, epic adventure movie you can get lost in, simply because the world is so charmingly wrought and the characters—barring the
Brownies, anyway—are so likable. The scene where Willow's wife bids him farewell at the start of his journey, handing him a braid of her hair? Brings a tear to the eye. Val Kilmer swashbuckling like a latter-day Errol Flynn, winning the heart of Bavmorda's daughter, Sorsha (Joanne Whalley)? Yes, please. The set design and matte paintings, the fun action sequences, the sense of real danger and evil—Willow is that rare children's movie from the '80s you can re-watch as an adult and not be disappointed. More than anything, though, it's Warwick Davis who carries the film as the meek little soul who goes up against some big, powerful adversaries and prevails.

It's a very George Lucas-y tale in this regard, and you tend to see his fingerprints on the film perhaps more so than Ron Howard's, from the iris dissolves and screen-wipes to the simple, mythic storytelling. This was Lucas before the endless Star Wars tinkering and prequel disappointments, back when he still commanded audience awe through unadulterated moviemaking magic. And there's plenty of it here thanks to Lucas' effects company, ILM, which provided some pioneering visual trickery. Willow was made at an interesting point in movie history when practical and photochemical effects were beginning to give way to digital imagery and compositing. Both old and new-school approaches were used for the film, which is probably best known for its innovative CGI morphing during the scene where Willow attempts to transform Fin Raziel from a goat back to a human. It looks quaint now—primitive, even—but looking at it through the 1980s glasses, it's damn impressive. And, really, that's a good way to view Willow in general— with nostalgia for what was arguably the golden age of kids' movies.

Making its Blu-ray debut for its 25th anniversary, Willow features a 1080p/AVC-encoded transfer. In a word, the picture is gorgeous, especially if you've grown accustomed to the now-ancient DVD. To start, there's not a scratch, speck, stain, or hair on this print — it's immaculate. The only evidence of age is some slight, barely perceivable brightness fluctuation in certain scenes, but you'd have to go out of your way to look for it.

If George Lucas and THX are involved, you know the sound design is going to be thoughtfully engineered for immersion and clarity. That's certainly the case with Willow's DTS-HD Master Audio 5.1 surround track, which is engaging from the prologue's crackling thunder to the pouring rain and arcs of electricity that accompany the climactic wizard battle.

Deleted Scenes with Ron Howard — "Willow was my first big cinematic adventure," says Howard, who goes on to explain and show some of the film's deleted scenes, including a whole subplot about Sorsha's father, Willow dazzling a troll with sleight-of-hand magic, and a Jaws-like "fish boy" sequence that was too difficult to pull of with then-contemporary VFX.

The Making of an Adventure with Ron Howard — Ron Howard introduces this vintage making-of documentary, which features interviews with his younger self and George Lucas, along with lots of behind-the-scenes footage and a look at the creation of the film's special effects.

From Morf to Morphing with Dennis Muren: Visual effects supervisor Dennis Muren — who's since worked on Jurassic Park and Terminator 2, among many other films — introduces a 2001 documentary about ILM's effects shots in the film, specifically the use of then-nascent digital effects.

An Unlikely Hero — Personal Video Diary of Warwick Davis: Davis reminisces about shooting the film and shares some of his video diaries from production, which he shot on VHS.

If you grew up with it, you're probably able to look past Willow's flaws and get sucked back into the adventure anew. For those of a certain age, this film is a sugar rush of nostalgia. But here's the thing, it may not have the sleek effects of The Hobbit, but Willow is a warm-hearted movie with characters you can't help but love. Highly recommended for '80s kids and their kids too.