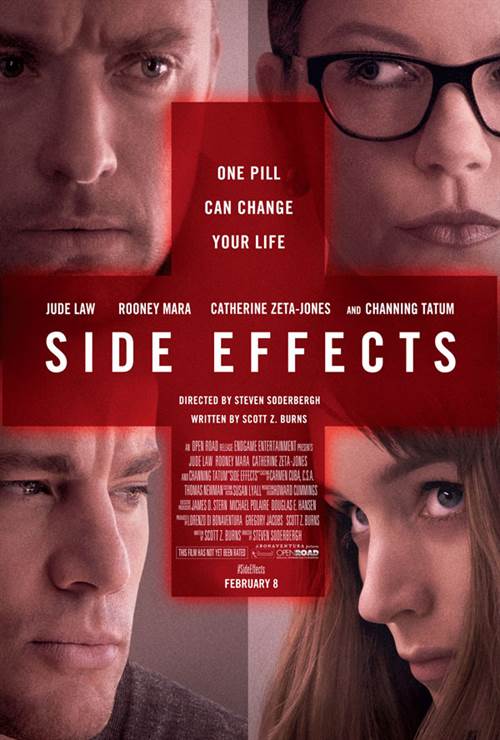 Download Side Effects in Digital HD/4K from the iTunes store.

Side Effects images are © Open Road Films. All Rights Reserved. 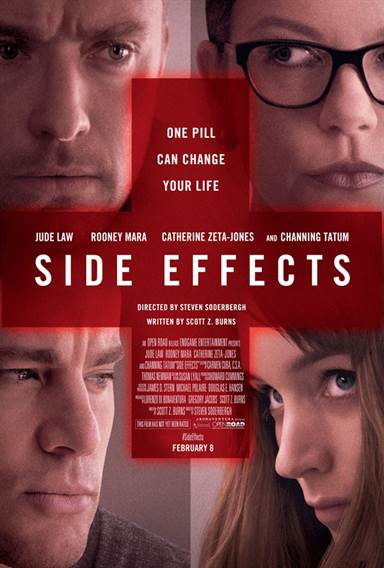 Very compelling and gripping, the twisty little film Side Effects has the right cast, direction by Steven Soderbergh and a solid script by Scott Z. Burns.  The movie works hard to keep the audience off kilter right up to an ending with a surprising payoff. Drama lovers, film buffs, and those hankering for a good mystery are the main audience for this thriller.
Emily (Rooney Mara) has been depressed waiting for her stockbroker husband Martin (Channing Tatum) to be released from prison after being nabbed for insider trading.  The wait ends after four long years and she gets reunited with the man who gave her everything while he was on top of the financial world.  But the waiting has taken a toll on Emily and the unhappiness, depression and anxiety causes her to attempt suicide.
Jonathan Banks (Jude Law) a fledgling psychiatrist gets assigned to Emily's case offering the usual meds connected with a suicide attempt. After several upsetting events Emily has given up on the usual antidepressants and tells Banks she wants to try a new drug on the market called Ablixa.  After consulting about the drug with Dr. Erica Siebert (Catherine Zeta-Jones), a colleague, Banks decides to allow Emily to take the medication. When the drug seems to be doing some good, he lets down his guard putting him in a precarious position.
The acting by the main cast makes this suspense filled film work.  Law's intelligent and trusting character Banks is a nice creation thoughtful yet susceptible to Emily's wishes.  He's a very good person who wants to be sure the prognosis and drug implementation is right for her, but he's also perplexed by her unusual behavior.  When things start going bad, fingers get pointed in his direction with little recourse.
Although I fell that Rooney Mara gave her best characterization in The Girl with the Dragon Tattoo, I'm completely blown away by her performance in Side Effects. Her ability to suck you into her character with believable charm on the one hand and be out of control psychologically on the other makes this film very alluring and absorbing.
Keeping his characters on point, director Soderbergh creates a twisty play that puts the audience at odds as to where the story's going, who's responsible and what will be the resolve.  Played out like a cat and mouse game, the film kept me guessing and switching sides throughout.  When Soderbergh finally lower's the boom however, I found myself fooled yet somewhat dismayed.  Does Soderbergh give his audience one twist too much?
The film has been rated R by the MPAA for sexuality, nudity, gore, and language.
FINAL ANALYSIS: A very good mind game thriller that's nicely acted. (B)