After making their way through high school (twice), big changes are in store for officers Schmidt (Jonah Hill) and Jenko (Channing Tatum) when they go deep undercover at a local college. But when Jenko meets a kindred spirit on the football team, and Schmidt infiltrates the bohemian art major scene, they begin to question their partnership. Now they don't have to just crack the case - they have to figure out if they can have a mature relationship. If these two overgrown adolescents can grow from freshmen into real men, college might be the best thing that ever happened to them.

Download 22 Jump Street in Digital HD/4K from the iTunes store.

Listen to the 22 Jump Street soundtrack on Apple Music. 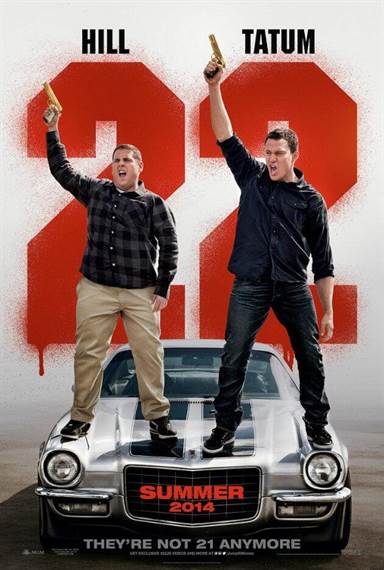 The boys are back in school for another round of parody comedic action fun in 22 Jump Street, starring Jonah Hill (Superbad, Wolf on Wall Street) and Channing Tatum (G.I. Joe: The Rise of Cobra, Haywire). The first film, 21 Jump Street, based on the 80s television show of the same name, was a smash success by taking a serious drama show and making a parody of it.

Not messing with success, this sequel wastes no time getting back into the hijinks of the first film. However, instead of going to High School, they duo are headed off to college to try to take down a new deadly drug, "wi-fi", which has spread like a virus around campus. During their investigation, the "partners" run into many different college situations including one-night stands, fraternities, and crazy professors.

Jonah Hill and Channing Tatum are perfect in their roles. These two have not missed a step since the original film and were born to play the roles of officer Schmidt and Jenko respectfully. The comedic timing is perfect and the laughs come in one gut-busting laugh after another. Hill and Tatum are joined but a superb supporting cast; Peter Stormare (Bad Boys II, Prison Break) as Ghost, returning Capt. Dickson (Ice Cube; Friday, Ride Along) and a span of young actors cast as the college kids Hill and Tatum must interact with (including Kurt Russell's son Wyatt Russell who turned down a role in The Hunger Games series just to be in this film).

The key to the success of this film is in the genius thought process by Jonah Hill and Michael Bacall that created the story. It all stems back to when Hill was asked to remake 21 Jump Street into a feature length film. His first thought was, "hell no"; however, after thinking about it, if the film and story didn't take itself seriously and became a parody of how insane the 80s show was, it could become a good film. This time around, it included sequel jokes, the double definition of a partner, and even showed how a ten year difference in age is a very big generation gap, and that it affects how you go on with your life.