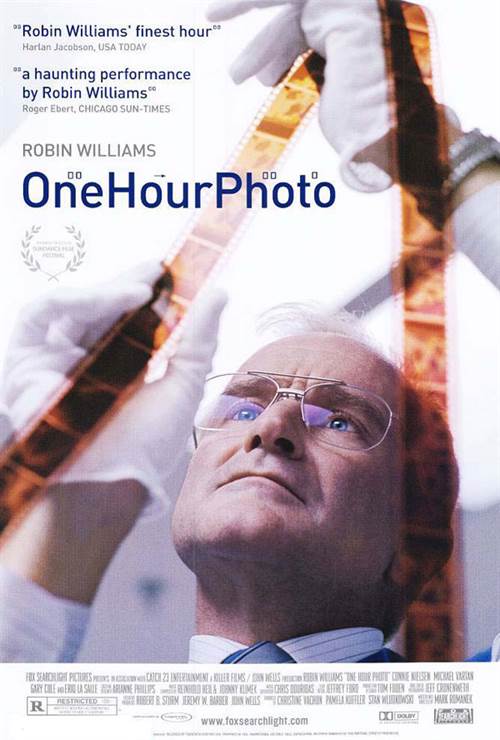 Sy Parrish (Robin Williams) has lovingly, painstakingly developed photographs for the Yorkin family since their son was a baby. But as the Yorkins' lives become fuller, Sy's only seems lonelier, until he eventually convinces himself he's part of their family. When Sy discovers the family's dark secret, a bizarre and thrilling confrontation ensues.

Download One Hour Photo in Digital HD/4K from the iTunes store. 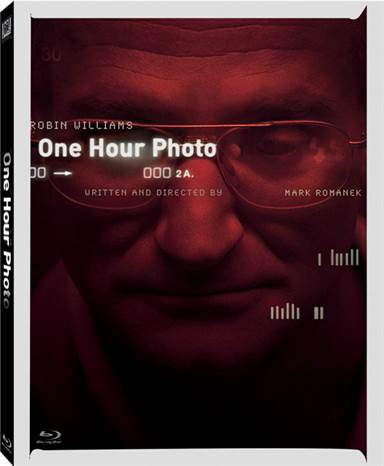 Think hard—when was the last time you dropped off a roll of 35mm film at a photo lab for processing and prints? It's probably been close to a decade, as digital cameras first outsold film models around 2003. For a lot of people, even the idea of getting prints made from digital files off of a memory card seems quaint, especially now that smartphones take and export photos directly to those twin repositories of social oversharing, Facebook and Instagram. Our present concept of "privacy"—and the way we interact with our snapshots—is totally different than it was in 2002, when music video director Mark Romanek made his second feature film, One Hour Photo, a stark psycho-thriller about obsession, and idealization.

Viewed in 2013, the movie does feel somewhat dated—technologically and culturally—but it's perhaps even eerier now precisely because it illustrates how we've since lost a sense of sanctity about images of our lives. Where once we'd break out physical photo albums to share with close friends after dinner, now total strangers can creep though our online feeds, anonymously observing—and silently judging—our drunken nights out and beach vacation bikinis, our kids' birthday parties and the coffee/scone combo we had for breakfast.

One thing has remained mostly true from 2002 until today: "People take pictures of the happy moments in their lives. Someone looking through our photo album would conclude that we had led a joyous, leisurely existence free of tragedy. No one ever takes a photograph of something they want to forget." That's Sy Parrish—played with admirable unease by Robin Williams in one of his earliest "dark" roles—a veteran photo minilab technician whom we meet having his mugshot taken at the police station. His crime? Let's just call it a gross invasion of privacy. When the story proper opens, a few weeks prior, Sy is employed at "Savmart," a sort of CVS-meets-Target department store with gleaming white floors and endless aisles of perfectly ordered products, illuminated by over-bright banks of fluorescent lights.

It's as antiseptic as an operating room, and Sy's own life is just as sterile. He watches TV alone in a colorless apartment, drives a nondescript white car, and obediently flashes a soulless grin before work at a break-room mirror that orders "check your smile." He has no relations, no friends, instead living vicariously through the photo memories of his repeat customers. He's especially drawn to the Yorkins, a seemingly perfect family that lives in a swankly modernist house in the suburbs. Will (Michael Vartan) is the successful, BMW-driving owner of his own design firm, his wife Nina (Connie Nielsen) is always stylishly attired, and their ten-year-old son Jake (Dylan Smith) wouldn't be out of place in a J. Crew Kids catalog. Sy has been developing their film for years; he has their address memorized and even remembers Jake's birthday, treating the kid to a free disposable camera.

But "Sy the Photo Guy," as they call him, has a disturbing little secret. In his apartment, on his living room wall, he has a massive collage of duplicate Yorkin family 5x7s, arranged chronologically in rows with O.C.D-level orderliness. Suddenly, his attempts to ingratiate himself with the Yorkins—walking Jake home from soccer practice, reading the same book as Nina in an attempt to stir up conversation, telling Will he's "a very lucky man"—seem more calculating and malicious than the merely sad actions of a desperate loner. When Sy finally discovers the family he's long-idolized isn't quite as flawless as they appear on the surface, something snaps, sending him on a bizarre revenge quest, reenacting a childhood trauma in a subconscious yearning for catharsis. Like David Lynch in Blue Velvet, Romanek is out to show the decay beneath suburbia's veneer of comfort and plenty. "The things we fear the most have already happened to us," Sy says to Nina, quoting Deepak Chopra, and though that may sound like some illogical Zen koan, it does get at the film's thematic undercurrents of loneliness, lost love, and materialism as a substitute for meaning and happiness.

As a thriller, One Hour Photo is unconventional, focusing not so much on the fear of the victims—the Yorkins—but rather on the inner life of Sy, the voyeur who stalks them through their cherished Kodak moments. Subsequently, the film isn't very suspenseful, but it is wholly unnerving, putting us in the Velcro-fastened shoes of a psychologically off-kilter nobody. Romanek claims inspiration from the "lonely men" films of the 1970s—think Taxi Driver—and while the choice of putting perpetually up spazz-comic Robin Williams in the main role seems strange at first, Williams kills it with a simmering meekness that's socially awkward and increasingly threatening. Imagine this guy alone in his apartment late at night, clicking spastically through your Facebook photo albums.

One Hour Photo's 1080p/AVC-encoded Blu-ray debut is somewhat disappointing from a visual standpoint, as it looks so obviously sourced from an old transfer. Black and white specks occasionally dot the print—there's been no significant digital cleanup here—and worse, many scenes suffer from the image shaking slightly but very noticeably inside the frame. This isn't camera shake; it's actually most visible during static, locked-down shots that should be still. On the other hand, the film's lossless DTS-HD Master Audio 5.1 surround track is free of any age or source-related issues and sounds excellent, with great fullness and clarity. Considering the minimal level of out-and-out action in the film, the sound design isn't incredibly intricate or immersive, but the mix nails the basics. Dialogue, most importantly, is always clear and easy to understand.

The film's Blu-ray debut contains all the material from the prior DVD release, along with several new extras curated by Mark Romanek himself. In the "extras" menu, the supplements are broken down by pre-production, production, and post-production.
Commentary by Mark Romanek and Robin Williams: The director and his star share a highly informative conversation about the making of the film and the story's underlying themes.
Storyboards: A self-playing gallery of storyboards containing nearly every scene in the film.
Location/Tech Scouting: Multi-Angle Vignettes: A collection of early location scouting footage.
Cast Rehearsals: An in-depth look at Romanek's rehearsal technique as he guides his actors through several scenes.
Lensing One Hour Photo: A somewhat unconventional making-of featurette, comprised entirely of behind-the-scenes footage overlaid with archival audio interviews with Romanek and film's actors.
Cinemax Featurette: A Cinemax promo made up of clips from the film and interviews with Romanek and the key actors.
Main Title Test: An early version of the camera negative-inspired main title sequence.
Sy's Nightmare Elements: A series of special effects passes for Sy's bloody-eyed nightmare scene.
The Charlie Rose Show: Romanek and Williams sit down at the famed interviewer's circular table. An excellent interview, especially when Williams calms down and begins discussing his character and how he got involved.
Sundance: Anatomy of a Scene: A comprehensive breakdown of the scene where Sy first meets Mr. Yorkin in the electronics aisle of Savmart, featuring interviews with Romanek, the actors, the cinematographer, editor, and more, each discussing his/her take on how they contributed to making the sequence work.

A lot has changed about personal photography since One Hour Photo debuted in 2002. We're less private with our photos, for one, and with the advent of Instagram, Sy's assertion that most people don't take snapshots of the little things—"the used Band-Aid, the guy at the gas station, the wasp on the Jell-O"—rings false, disproved by thousands upon thousands of photos of latte foam and half-eaten sandwiches and other mildly interesting bits of daily minutiae. Still, the film is maybe more terrifying now because it's not only the photo lab guy who has access to these moments we find important enough to capture anymore; anyone with an internet connection can spy in our lives, observing us with jealousy or derision, admiration, contempt or indifference, which is what it usually comes down to. If you haven't seen it in a while, One Hour Photo is certainly worth revisiting. The disc special features alone swing this release into the purchase- worthy category.