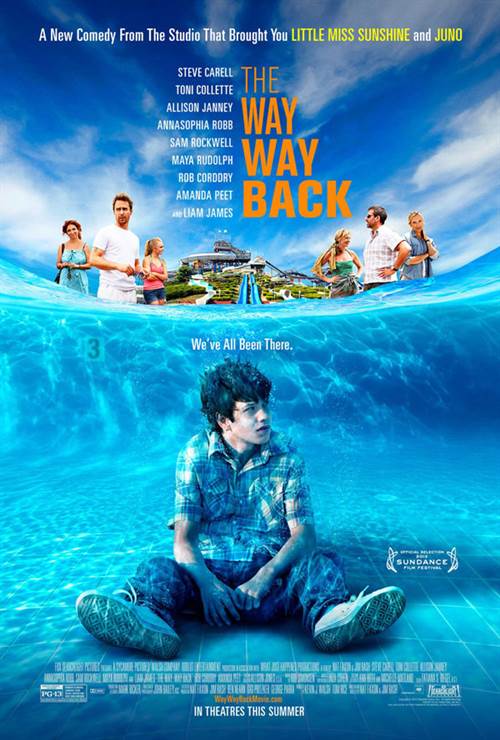 The Way, Way Back Synopsis

THE WAY, WAY BACK is the funny and poignant coming of age story of 14-year-old Duncan’s (Liam James) summer vacation with his mother, Pam (Toni Collette), her overbearing boyfriend, Trent (Steve Carell), and his daughter, Steph (Zoe Levin). Having a rough time fitting in, the introverted Duncan finds an unexpected friend in gregarious Owen (Sam Rockwell), manager of the Water Wizz water park. Through his funny, clandestine friendship with Owen, Duncan slowly opens up to and begins to finally find his place in the world - all during a summer he will never forget.

Purchase DVD/Blu-ray/4K UHD physical copy of The Way, Way Back today at Amazon.com

Stream The Way, Way Back in Digital HD/4K from the AppleTV store.

The Way, Way Back images are © Fox Searchlight Pictures. All Rights Reserved.

The Way, Way Back Blu-ray Review 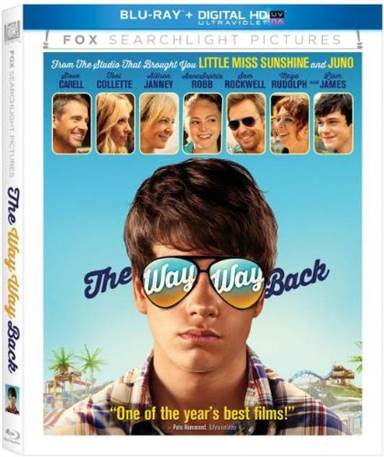 If you're too young to have experienced the era of the family station wagon, you may not initially understand the phrase "the way way back", for it referred to the most posterior section of the car, where quite frequently the third seat faced backwards. As the youngest of three children, I can tell you from personal experience that it was a double edged sword to be relegated to this section of the car. At least I had my own private little region where only the occasional incursions from my elder sisters disturbed me, but on the other hand, I often felt like I was an outlier in my own family, not just separated, but actually forced to simply view where we'd already been rather than where we were headed. The Way, Way Back, though it's a contemporary feature, exploits the peculiar "geography" of older station wagons by placing Duncan (Liam James) in the "way way back" rear facing seat on what initially seems to be a family trip. The man driving the car, Trent (Steve Carell), starts quizzing Duncan about how Duncan sees himself, asking the kid to give himself a numerical ranking between one and ten. So far, this might seem like any typical family road trip, where a father is attempting to engage his son. Once Trent lets loose with a pretty nasty barrage of insults, telling Duncan he's no better than a three, and then revealing that he's not Duncan's father at all but is instead merely Duncan's mother's boyfriend, a somewhat more convoluted dynamic has become apparent. It turns out that Duncan is an unwilling prisoner of sorts as Trent trundles his biological daughter Steph (Zoe Levin) to his beach house, bringing Duncan and Duncan's mom Pam (Toni Collette) along for the (literal) ride.

The Way Way Back touts its supposed connections to both Little Miss Sunshine and Juno, and while there are certain tonal similarities between the films, The Way Way Back really has little of the former's off kilter humor and virtually none of the latter's understanding parental influence —at least for most of the proceedings. That said, the film is incredibly sweet natured and actually quite touching virtually the entire way through Duncan's misadventures over the course of several summery weeks.

There's a rather large and colorful supporting cast that turns up once this would be blended family arrives at Trent's beach house. First up is Trent's slightly loopy and usually more than slightly buzzed neighbor, Betty (Alison Janney), who can frequently be heard screaming at her teenage daughter Susanna (AnnaSophia Robb) and younger son Peter (River Alexander), who has the misfortune to suffer from "lazy eye", something that affords the film some perhaps questionable punchlines. Trent's best friends Kip (Rob Corddry) and Joan (Amanda Peet) also become semi-regulars at Trent's house, and they end up hosting a get together on Kip's boat where Trent insists that Duncan wear a ridiculously overstuffed life jacket which only makes him an object of derision by Steph.

Trent in fact seems to be going out of his way to demean Duncan, and in one of this film's two most interesting changes of pace, performance wise, Steve Carell gets to stretch a bit as a kind of smarmy, psychologically manipulative jerk who (it ultimately turns out) may not be as madly in love with Pam as he pretends to be. None of this gets by Duncan, and Liam James, in an absolutely pitch perfect performance, is able to capture both the angst and the anger of this young man who find himself being buffeted by forces beyond his control, and seemingly without a friend in sight to help him through the maelstrom.

That friend ultimately does arrive in the form of Owen (Sam Rockwell), the owner of the vacation island's perhaps unnecessary water park. Owen is exactly the kind of pseudo-big brother any teenage boy would want, a goofy hipster type with an arsenal of off the wall jokes and an easy, approachable manner that almost instantly breaks through Duncan's self-imposed defensive reserve. This is the other really interesting performance from a "change up" perspective. While Rockwell has certainly shown his comedic chops in such films as Galaxy Quest, often he's been relegated to kind of odd character parts in more turgid dramatic films. Here he's absolutely charming and completely affable in a slightly more grown up, empathetic way, in fact becoming reminiscent of Carell's Little Miss Sunshine co-star Greg Kinnear at times. Several of his scenes with James are the emotional high points of the film.

If there's a fault to be found with The Way Way Back—and it is admittedly a niggling one—it's in the underwritten roles for several of the female characters. Toni Collette actually does incredible work in the film, but that is more a testament to her innate abilities than to anything she has to work with here. Pam is a cipher, a type rather than a character. The same could be said for Janney's Betty, who comes off as the typical blowsy next door neighbor in any number of sitcoms. Maya Rudolph is also on hand as a water works employee who seemingly has some kind of history with Owen which is never fully explored. All of these fantastic performers are just fine, and as stated above these are relatively small issues, but the film might have had even more emotional heft had we been able to explore these characters a bit more fully.

The Way Way Back may in fact be too uneventful for some viewers, but its leisurely pace and slowly developing interrelationships are beautifully handled and end up giving the film a really unexpected emotional resonance. Coming of age films frequently wallow in a kind of lachrymose bathos where small events are blown out of proportion and epochal ones are dealt with trivially. It's to co-writers and co-directors Nat Faxon and Jim Rash's credit that the tone of The Way Way Back is so spot on every step of the way. Many audience members will want to be joining Duncan (and his "guest"—which you'll understand when you see the film) in that sanctuary at the back of the car by the time this small scale but hugely enjoyable film comes to a close.

The Way Way Back is presented on Blu-ray courtesy of 20th Century Fox Home Entertainmnt with an AVC encoded 1080p transfer in 1.85:1. I am slowly but surely becoming a major fan of the Arri Alexa. I often feel that digitally shot features have a shallow and textureless sheen to them, but once again I am really impressed not just by the expected sharpness and clarity of the image on this Blu-ray, but also its nice depth and density. Some of the close-ups feature fantastic fine detail (look at the screenshot of Carell in the rear view mirror for a good example). Contrast is very solid here, with no lack of shadow detail in some of the dimmer interior scenes. I noticed no obvious compression artifacts throughout this presentation. The Way Way Back features a nice if somewhat restrained sounding lossless DTS-HD Master Audio 5.1 mix. The best elements of this track in terms of surround activity come from the good use of source cues as well as some of the raucous crowd noises at the water park where Duncan ends up spending most of his summer. Otherwise, the film tends to play out in much smaller scale, more intimate, dialogue scenes, and while fidelity is equally excellent here, the soundfield is understandably narrower and less immersive.

While there are a few minor qualms that some may have with the film, overall it's an incredibly heartfelt and beautifully rendered depiction of one young boy coming to terms with who he is and what he has to offer the world. While The Way Way Back isn't really laugh out loud funny in any traditional sense, it's resolutely entertaining and ends up packing quite an emotional wallop. This Blu-ray looks and sounds great and comes Highly recommended.