It's Always Sunny in Philadelphia (2005) Download It's Always Sunny in Philadelphia in Digital HD/4K from the iTunes store.

It's Always Sunny in Philadelphia images are © 20th Century Fox. All Rights Reserved.

It's Always Sunny in Philadelphia: The Complete Season 8 DVD Review 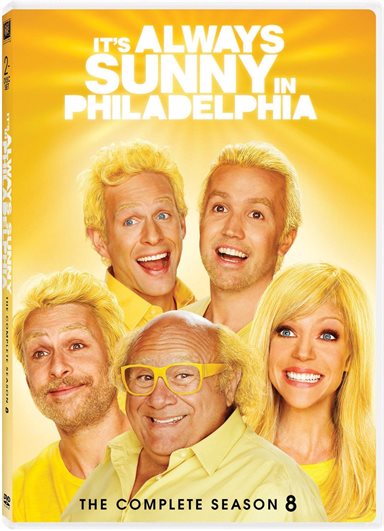 Over the years, with dramas coming and going to varying degrees of success and sometimes-forced situation comedies struggle to keep the laughs coming, there has been a handful of shows that consistently entertain the masses. "It's Always Sunny in Philadelphia" is one of those shows.

The charm of this series is that it is like the nasty-ass honey badger. It just doesn't give care. In fact, it is so interested in not caring that it often offends with its mere subject matter. "It's Always Sunny in Philadelphia" is the kind of show to watch so you can develop a thicker skin over your hot-button issues. Rather than getting incensed about whatever you end up seeing on television – whether it's our imperfect legal system, bullying or even the dreaded cancer – learn to not take things so seriously.

In this sense, "It's Always Sunny in Philadelphia" is a public service. It allows people to look at the often morose hand that life deals us and have a laugh about it.

This show hit its stride around season four, once Danny DeVito found his way into the cast and settled in. The key to the show is that none of the characters are remotely likeable as people, but they are wonderful to watch act out. It's the kind of series that makes you feel better about yourself simply by watching terrible things happening to terrible people with hilarious consequences.

Season 8 keeps the characters grounded in their awfulness and refuses to allow them to grow. In fact, they often do the opposite, and that's where the magic lies.

This season continues the gang's inability to function in normal human society, hitting on some social issues (like the push for recycling, the worth of psychological counseling and the corruption of the justice system). However, this show is not a political one, demonstrating that the extremes on an issue are often fraught with hypocrisy and problems.

For example, in the series finale "Reynolds vs. Reynolds: The Cereal Defense," Dee (Kaitlin Olson) and Dennis (Glenn Howerton) are in a legal battle over Dennis' right to eat cereal while driving and Dee's plight of having milk spilled in her car. This isn't a reaction to any specific case in recent history. It's not trying to make a specific point. Instead, it demonstrates the problems in the system by blowing them up to ridiculous proportions.

Similarly, the episode "The Gang Gets Analyzed" doesn't indict psychoanalysis per se. Instead, it shows that some people are likely beyond help, and a trip to the shrink isn't an immediate cure-all for anti-social behavior. It also is there to make you laugh… which it does… a lot.

Like some of the recent seasons, the success of the show allows for some higher production values, particularly in early episodes like "The Maureen Ponderosa Wedding Massacre" (in which an apparent zombie outbreak threatens the lives of the Gang) and "Charlie and Dee Find Love" (in which we get out of the bar and into some grander locations). However, these larger sets and higher exposure serve the story rather than to make things look bigger and more expensive.

In the end, Season 8 continues the long tradition of a funny show, with only ten episodes so as to not let the series run out of steam too quickly. It's one of the funniest things on television, and if things continue for a few more years, there will be more than 100 shows with plenty of funny episodes to fall back on in a pinch.

This being a standard definition DVD, not much can be said in regards to the video/audio quality. After watching so many Blu-ray's over the years, it isn't hard to see and hear the faults in these DVD's. However, that doesn't detract from the laughter and enjoyment the episodes inspire. What makes up for the lack of Blu-ray, are the wonderful special features included in this set:

Even after so many years It's Always Sunny in Philadelphia is still plenty capable of entertaining on a regular basis. On first viewing, Season 8 seems lighter than past seasons in hilarity, but still funnier than most contemporary comedy series, especially if you've seen enough previous episodes to get all the callbacks and character quirks. To the unacquainted, I'd recommend starting at the beginning and giving the show enough time to find its groove. To the already faithful, you probably need no push to see and own this latest batch of episodes. Though inferior to Blu-ray, the DVD's presentation and bonus content is far preferable to television broadcasts and a great way to see or revisit Season 8.