Jennifer Lawrence and Chris Pratt are two passengers onboard a spaceship transporting them to a new life on another planet. The trip takes a deadly turn when their hibernation pods mysteriously wake them 90 years before they reach their destination. As Jim and Aurora try to unravel the mystery behind the malfunction, they begin to fall for each other, unable to deny their intense attraction... only to be threatened by the imminent collapse of the ship and the discovery of the truth behind why they woke up.

Download Passengers in Digital HD/4K from the iTunes store. 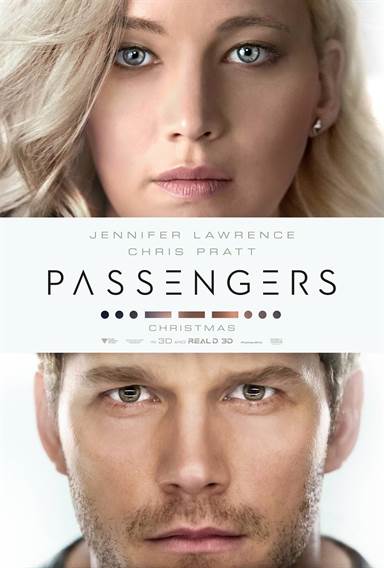 As long as we've been looking up at the sky and stars, interstellar travel has long been a goal and dream of the human race.  As technology has advanced in recent years, that goal seems more and more obtainable.  While not completely realized yet, we will hopefully have the ability to travel and colonize other planets in the next 100 or so years.  Columbia Pictures' Passengers is founded on this concept and what could happen with space travel.

The spaceship Avalon is on its way to Homestead II, a new planet 120 years away.  For 5000 passengers and 294 crew members, they will spend those 120 years in hibernation while the ship travels on auto pilot.  However, when one of the pods opens 90 years too early, Engineer Jim Preston (Chris Pratt; Jurassic World) finds himself awake and alone with no way to go back to sleep.  After a year of always winning at basketball, drinking himself into a stupor and trying to break down the door to the bridge, he finds himself enamored with one of the other passengers, Aurora Lane (Jennifer Lawrence; Silver Lining's Playbook).

Ultimately, after much internal struggle and soul searching, Jim decides to open Aurora's pod, waking her up early, too, and then pretends it was an accident.  After her initial shock wears off, she and Jim become close until his deception is ultimately revealed.  However, when a crew member (Laurence Fishburne; The Matrix) also suddenly wakes early, the three of them realize the ship is malfunctioning and must figure out how to fix it before everyone on boards dies.

I really liked the premise of this film.  It was somewhat unique and intriguing.  Unfortunately, the script got in the way at the end.  To put it simply, it wasn't good.  In fact, it was stupid.  As I walked out of the theater, I got into a discussion with several other critics and we all came up with better endings than the one that appeared on screen.  All I can say was, after an intense couple of hours, the ending was a letdown.

Having spoiled the ending for everyone, I will say I thought Director Morten Tyldum (The Imitation Game) did a good job.  He has a knack for building suspense and Passengers is no exception.  He also takes advantage of the setting by offering huge sweeping shots to really give the audience the feeling they are in space with the vast and endless sea of stars and blackness.

With minimal cast members, the main actors had to be chosen wisely.  They needed to be able to carry the film and make the story believable but also be big enough names to offer the studio box office draw.   Lawrence and Pratt were excellent options as they truly meet both criteria.  Let's face it, Lawrence could be in any movie and do a fantastic job and Pratt is on fire right now and manages to match Lawrence, for the most part.  An honorable mention also needs to go to Michael Sheen (Masters of Sex), who does a terrific job seeming human while all the while reminding us he is really a robot.

Passengers is too long, but maybe Tyldum just wanted us to get a sense of what Preston was feeling being alone for an entire year on a spaceship.  It also is frustrating, as it takes so much time to get to the end and then is a complete mess (did I mention the ending was stupid?).  Finally, it gives Andy Garcia (Ballers) too much credit, as he is only seen in the last 30 seconds of the film simply looking dumbfounded.  They could have paid anyone to do that with the same effect (or lack thereof).  It has so much potential and just managed to waste it in the end.