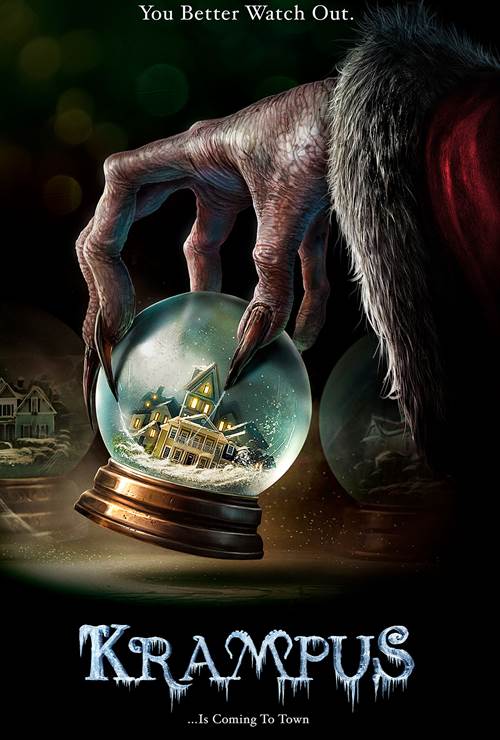 When his dysfunctional family clashes over the holidays, young Max (Emjay Anthony) is disillusioned and turns his back on Christmas. Little does he know, this lack of festive spirit has unleashed the wrath of Krampus: a demonic force of ancient evil intent on punishing non-believers.

All hell breaks loose as beloved holiday icons take on a monstrous life of their own, laying siege to the fractured family’s home and forcing them to fight for each other if they hope to survive.

Download Krampus in Digital HD/4K from the iTunes store. 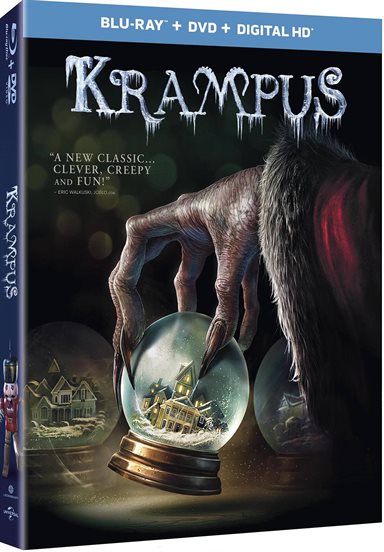 When you think of holiday horror movies, you don't often think of Christmas.  However, if you've ever heard the Austrian Folklore about a horned, half goat-half demon creature that punishes children who misbehave and don't believe in Saint Nicholas anymore, then you realize the story lends itself to a creepy, horror tale.  Universal Studios decided to take that tale to heart and made Krampus, the December-time scary movie.

Max (Emjay Anthony; Insurgent) still wants to believe in Santa and the holiday spirit, but his family makes it difficult.  When his annoying cousins read his letter to Santa out loud at the dinner table and make fun of him, Max screams at them that he doesn't believe and he hates them.  This declaration (and ripping up his well-crafted letter) sets off a chain reaction that has dire consequences for the entire family.

A blizzard, and power outage (of course), leaves the family huddled around the fire for warmth and the town is seemingly deserted.  When Max's sister, Beth (Stefanie LaVie Owen; The Carrie Diaries), doesn't return from her boyfriend's house, their dad, Tom, (Adam Scott; Parks and Recreation) and Uncle Howard, (David Koechner; American Dad!) go looking for her and discover things aren't quite right.  Add to the mix the European born grandmother, Omi (Krista Stadler) and her tale of the evil Krampus (Luke Hawker; small Blacks TV) and his menacing minions, and it the perfect scenario for destruction and death.

If you are a fan of the 80's style of horror movies, then you will find some enjoyment from Krampus.  Just like Poltergeist (the original not the remake) and Gremlins, the movie combines some humor with the story and gears more towards the creepiness factor as opposed to the in-your-face, jumping out of the background to scare the daylights out of you scenario.  Krampus plays more on your brain in order to scare you than on the heart pounding, screaming, physical reaction that seems to be most prevalent in today's horror films.

The cast, who is excellent and really works well together, includes Toni Collette (United States of Tara) and Adam Scott (Parks and Recreation).  The younger actors, Anthony and LaVie Owen, are very good for their age and Stadler was a perfect casting choice to play the slightly creepy Austrian Grandmother.  Koechner, along with Conchata Ferrell (Two and a Half Men) lend some comic relief to the script.  While not the most well known actors, they blend together and really give the viewers the feeling that they are all members of the same family.

The Blu-ray offers all the quality one would expect.  The DTS-HD Master Audio 5.1 is full and robust, which certainly adds to the creepy factor, and the 1080p high definition video matches the audio to perfection with deep, dark blacks that clearly give the effect of scariness in a house without any power.  The extras are varied, but less than unique, and include an obligatory gag reel that isn't funny and a look at the making of the creatures haunting the film.  While the extras are plentiful, they need not be viewed more than once.

For fans of the horror genre, and those that enjoy a good holiday classic, this feature is one you will want to add to your collection.  Even if you aren't a horror fan, this movie isn't overly scary; however, it is entertaining enough to make it part of your holiday movie catalog each December in order to switch it up from the saccharine sweet fair usually invading the airways during that season. 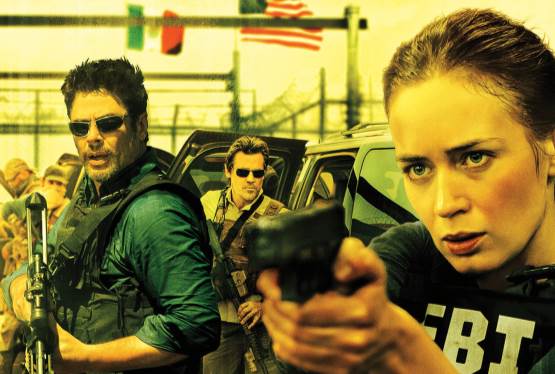 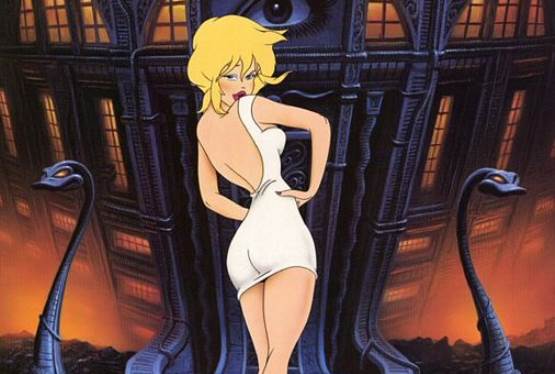