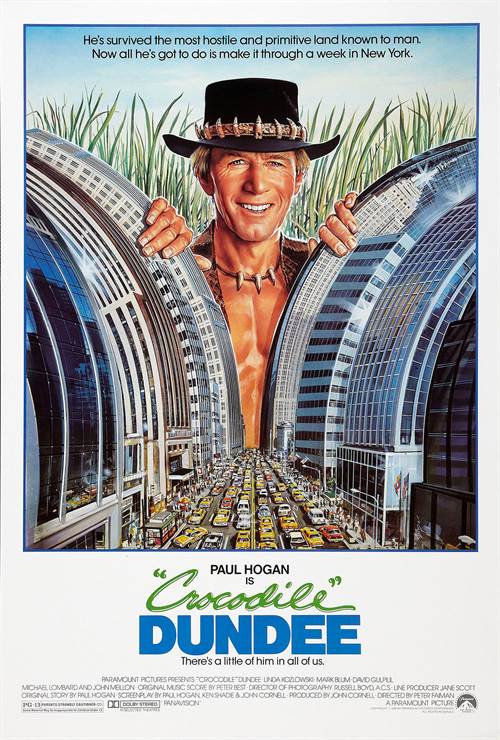 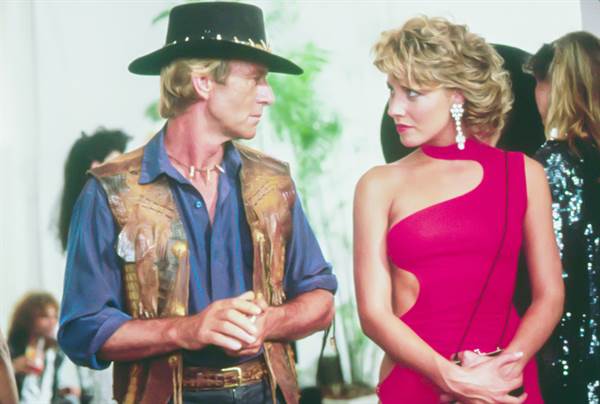 Paul Hogan's hilarious, endearing performance made "Crocodile" Dundee the biggest box-office comedy smash of 1986! Michael J. "Crocodile" Dundee (Hogan) is a free spirited Australian who hunts crocodiles with his bare hands, stares down giant water buffaloes, and drinks mere mortals under the table. But he's about to face the ultimate torture test--a trip to New York City. Beautiful and tenacious reporter Sue Charlton (Linda Kozlowski) gets more than just a story as the "wonder from Down Under" rocks the Big Apple to its core.

Stream Crocodile Dundee in Digital HD/4K from the AppleTV store.

Listen to the Crocodile Dundee soundtrack on Apple Music. 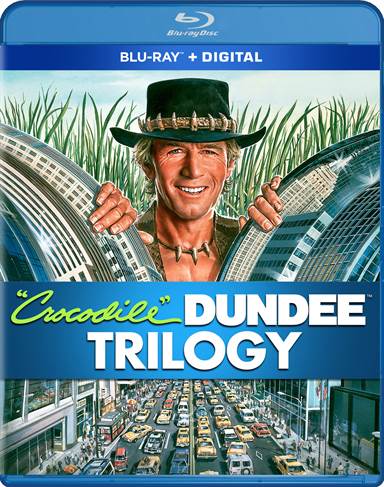 The sign of really good writing is when a line from a film sticks out so much that it becomes iconic and is quoted decades after the movie first premieres.  Think about how you feel every time you hear, "May the Force be with you", "Here's looking at you kid", or "There's no place like home".  Some quotes simply have an impact on us and become a part of everyday speech.  While not a part of any top 100 lists of famous movie quotes, one instantly thinks of Crocodile Dundee when they hear someone say "That's not a knife.  THAT's a knife".  Luckily, to celebrate the 35th anniversary of the original movie, Paramount Pictures has released all three films in one set.

Mick "Crocodile" Dundee (Paul Hogan; Lightning Jack) is a bushman in the Australian outback with quite a reputation.  Rumor has it he lost part of his leg from a crocodile bite and then crawled hundreds of miles back to his home base.  Sue Charlton (Linda Kozlowski; Village of the Damned) is a journalist for Newsday newspaper who heads to the Outback to meet Crocodile Dundee and interview him for the paper.  After Dundee shows off for Sue, she invites him to come back with her to New York.  There, Dundee is amiable and friendly, but he is most definitely also a fish out of water.

The sequel, aptly named Crocodile Dundee II, finds Sue and Mick happily cohabitating in New York City.  While Mick is still unaccustomed to the way things are done in the city, people still flock to him thanks in part to Sue's articles about the friendly yet elusive Crocodile Dundee. Suddenly, Sue becomes a target of a Columbian Drug Cartel and Mick decides to take her back to the "bush" in Australia to try and keep her safe.

If the saying "quit while you're ahead" is true, then the third film in the trilogy, Crocodile Dundee in Los Angeles never should have been made.  When Sue takes a position at the LA branch of the newspaper, she, Mick, and their son, Mikey head to California where Mick suddenly becomes a sleuth, trying to solve the mysterious murder of Sue's predecessor. Yes…really, and the plot only gets worse from there.

Hogan has a certain charm about him that makes most audiences fall in love with him.  Sadly, he is unable to maintain winning over audiences and by the third movie, his "act" becomes annoying instead of funny and sweet.  Kozlowski fits her role as a no-nonsense, New York City newspaper journalist but the two of them seem to fizzle out quickly.  With art imitating life, Hogan and Kozlowski met on set and got married after living together for a few years.

The three-disc Blu-ray set offers video quality that improves with each film.  Details are well defined, and the color palette is strong and deep.  All three movies have decent pictures but the upgrade to newer technology accentuates some of the flaws.

Interestingly, the first movie is presented in DTS-HD Master audio 2.0 with the latter two utilizing DTS-HD Master Audio 5.1.  I don't know the reason behind the lower quality audio on disc one but the second two movies sound great.  Their soundtracks are spread across the surround speakers and the dialogue is mainly front and center.

The set only comes with the three Blu-ray disks and the digital download.  The extras are sparse as well which generally doesn't appeal to consumers.  The extras include theatrical trailers and behind-the-scenes/making-of featurettes which don't add much in the way of content.

Before seeing the movies, I had heard they were funny and heartwarming, but I couldn't understand the appeal.  Other than a "puny" line here or there, the movies were boring and annoying.  I barely laughed twice during my binge-watching the movies, and I am glad I didn't pay to see it in theaters. 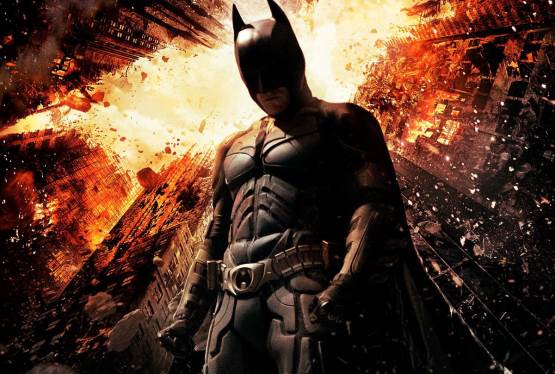