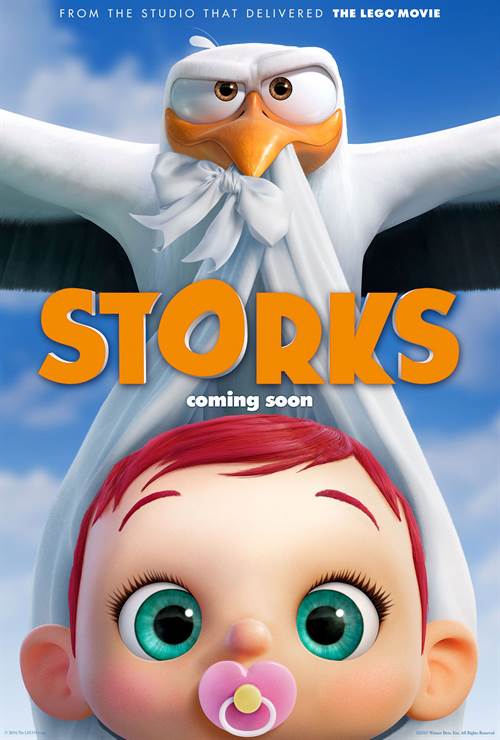 Storks deliver babies…or at least they used to. Now they deliver packages for global internet giant Cornerstore. Junior, the company’s top delivery stork, is about to be promoted when he accidentally activates the Baby Making Machine, producing an adorable and wholly unauthorized baby girl. Desperate to deliver this bundle of trouble before the boss gets wise, Junior and his friend Tulip, the only human on Stork Mountain, race to make their first-ever baby drop – in a wild and revealing journey that could make more than one family whole and restore the storks’ true mission in the world.

Stream Storks in Digital HD/4K from the AppleTV store. 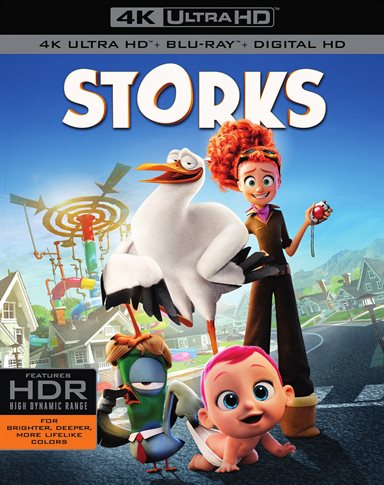 We all know that Storks deliver babies.  I mean, come on, that's what our parents told us.  And that's what we tell our children.  But wait, we will all have some explaining to do, because in the Warner Bros. movie, Storks, they don't deliver babies – they deliver packages.

Yes, you read it correctly.  Packages.  You see, Storks did deliver babies up to about 18 years before the film starts.  But when one incompetent employee Stork loses an address to deliver a baby, the Storks have to find something else to do, besides raise the child they can't deliver.  Opening up Cornerstone, the Storks now deliver packages that are anything and everything but babies.   Orphan Tulip (Katie Crown; Bob's Burgers), as the Storks call her, really tries to help in the factory, but it's clear that she doesn't fit in.

Meanwhile, a lonely little boy named Nate (Anton Starkman), whose parents are Henry (Ty Burrell; Finding Dory) and Sarah (Jennifer Aniston; Office Christmas Party) comes across an old brochure about Cornerstone and their former business of baby-making.  Nate writes a letter to Cornerstone asking for a younger brother with Ninja powers.  The letter, received by Cornerstone, lands in the hands of Tulip, who has been banished to a defunct area of the company, and instead of destroying it like she should, she ends up processing the letter and creating a baby, which now needs to be delivered before anyone finds out what happened.   With the help of her Junior (Andy Samberg), Cornerstone's top Stork Delivery bird, Tulip is determined to deliver the baby to the little boy, Nate (Anton Starkman), who, unbeknownst to him, is going to be on the receiving end of a little sister.

Adventures abound as Junior and Tulip meet dangerous wolves and even the retired Stork, Jasper (Danny Trejo; Desperado), who lost Tulip's address 18 years before, causing her to become an orphan.  Even conspiracies within the company, plotted by Toady (Stephen Kramer Glickman; Cupcake Wars) are present.  Despite trials and tribulations, happy endings happen for all in this light-hearted animation by Warner Brothers.

Warner Bros. released this version in 4k Ultra HD, 2160p and an aspect ratio of 2.4:1.   You have to actually watch the 1080p Blu-ray for an explanation into what differentiates 4K UHD, but it's actually well worth listening to it.  They describe the 4K UHD as "brilliant brights, and deeper darks… dazzling colors."  I can't disagree.  The colors pop, which is so important in an animated film.  And if you don't have 4K, don't worry- the 1080p version is bright and colorful as well as worth watching.

Both versions use DTS-HD audio.  The music crescendos nicely and the dialogue can be heard over the background music and noises.  I didn't hear any lag in the audio.  In addition, the music was well placed and supported the storyline appropriately.

I always enjoy the special features.   Storks is no exception and the following bonus features can be found on the Blu-ray 1080p disc: