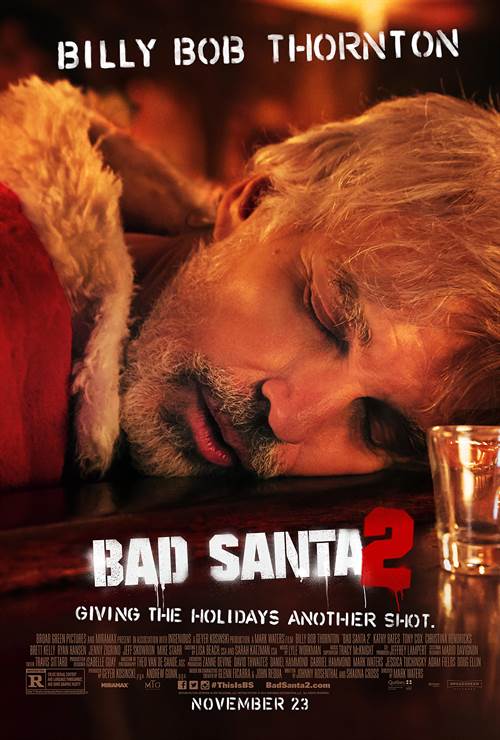 BAD SANTA 2 returns Academy Award®-winner BILLY BOB THORNTON to the screen as America's favorite anti-hero, Willie Soke. Fueled by cheap whiskey, greed and hatred, Willie teams up once again with his angry little sidekick, Marcus (TONY COX), to knock off a Chicago charity on Christmas Eve. Along for the ride is 'the kid' - chubby and cheery Thurman Merman (BRETT KELLY), a 250-pound ray of sunshine who brings out Willie's sliver of humanity.

Mommy issues arise when the pair are joined by Academy Award®, Golden Globe and Emmy-winner KATHY BATES, as Willie's horror story of a mother, Sunny Soke. A super butch super bitch, Sunny raises the bar for the gang's ambitions, while somehow lowering the standards of criminal behavior. Willie is further burdened by lusting after the curvaceous and prim Diane, played by Emmy Award-nominee CHRISTINA HENDRICKS, the charity director with a heart of gold and libido of steel.

You better watch out: BAD SANTA 2 is coming to town. 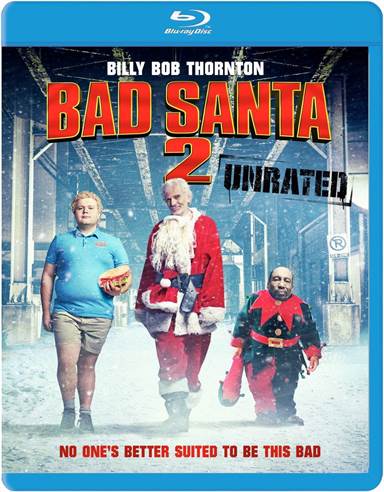 Ahhhh... the sights, the sounds, and the smells of the Holiday Season.  They bring back fond memories and induce excitement for the gift giving and receiving to come.  Multicolored blinking lights and Holiday songs blaring throughout every public place you go.  Guys dressed up like Santa Clause taking pictures with kids of all ages go along with the festivities and every year there seems to be at least one holiday-themed movie in the theaters.  In 2003, that theme took a twist with Bad Santa and this past winter he was back in Bad Santa 2.  This week, the latter film will be heading to stores on Blu-ray for you to enjoy once again.

Willie Soke (Billy Bob Thornton; Armaggedon) is the same low life he was 13 years ago.  He still drinks too much, loses every job he has and plans infinite ways to kill himself.  The young boy he met and exploited in the first movie, Thurman Merman (Brett Kelly; Unaccompanied Minors) is all grown up with a job and still hangs around Willie, despite Willie's best efforts to get rid of him.  When Thurman shows up at Willie's place with a letter and some money for him, Willie finds he is once again wanted for a heist; this time in Chicago.

When he gets to Chicago, Willie, along with his accomplice Marcus (Tony Cox, Oz The Great and Powerful), find out the job is to rob a charity orchestrated by Willie's estranged mother, Sunny (Kathy Bates; American Horror Story).  Reluctant to go through with it and unable to keep himself sober, Willie ultimately robs the charity, wants to return the money, ends up in the hospital again and, finally, ends up on probation once more.  Thurman also follows Willie to Chicago, again, complicating an already complicated mess.

Thornton is the gem in this film and its predecessor as he is a multifaceted actor who can play a multitude of roles both comedic and dramatic. His portrayal of Willie is unapologetically rude, crude, pathetic and downright mean.  His interactions with Bates, Cox, Kelly and recovering alcoholic and Charity owner Diane Hastings (Christina Hendricks; Mad Men) make the movie what it is.  The strong supporting cast including the aforementioned Bates, Cox, and Kelly help Thornton shine.  Sadly, the only one I didn't especially like is Hendricks, as I found her to be flat, unemotional and mismatched next to Thornton.

The Blu-ray is delivered in 1080p High Definition Video with a widescreen 1.85:1 aspect ratio, which is fairly standard for today's Blu-rays.  Because of this, the colors are strong, especially the reds of the Santa suit.  The Audio is DTS-HD Master audio 5.1 that runs the range of the audio spectrum.  The mix is well done, so there isn't a lot of toggling between music/sound effects (think gun shots) and the dialogue.  The disc offers a number of extras, including a not so funny gag reel, deleted scenes, Thurman then and now, Just your average Red Band Featurette, which is as inappropriate as you can imagine, "That's My Willie" original animated series, which is cute and kind of a spoof on the additional shorts that accompany many animated features these days, an Alternate beginning and ending, and the very funny R-rated version of Jingle Balls (definitely not a sing-a-long).  There is also the theatrical and unrated versions of the movie on the Blu-ray, the latter being obviously nastier than the former.

The first film was hilarious and played well in the theater, garnering a little bit of a cult-like following.  Thirteen years later, the sequel couldn't live up the original, unfortunately.  Willie is still terrific and with Marcus and Thurman back, and the addition of Sunny, it has all the ingredients to be very good but it simply doesn't "get there".  If you liked the original and want to have the set, or if you simply love all types of Holiday-themed films, go out and grab this one at the store.