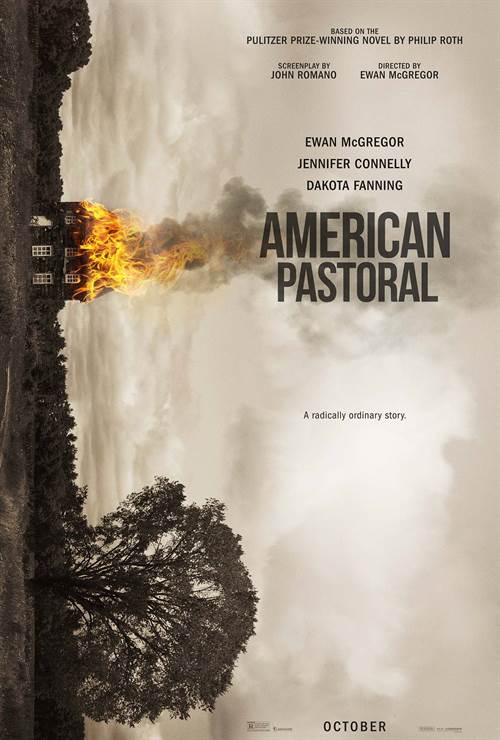 Based on the Pulitzer Prize-winning Philip Roth novel, AMERICAN PASTORAL follows an all American family across several decades, as their idyllic existence is shattered by social and political turmoil that will change the fabric of American culture forever. Ewan McGregor (Salmon Fishing in the Yemen, Beginners) makes his directorial debut and stars as Seymour “Swede” Levov, a once legendary high school athlete who is now a successful businessman married to Dawn, a former beauty queen. But turmoil brews beneath the polished veneer of Swede’s life. When his beloved daughter, Merry, disappears after being accused of committing a violent act, Swede dedicates himself to finding her and reuniting his family. What he discovers shakes him to the core, forcing him to look beneath the surface and confront the chaos that is shaping the modern world around him: no American family will ever be the same. AMERICAN PASTORAL also stars Academy Award® winner Jennifer Connelly (A Beautiful Mind ) as Dawn, Dakota Fanning (The Runaways, The Twilight Saga) as Merry, Emmy® winner Uzo Aduba (Orange Is the New Black), and Academy Award® nominee David Strathairn (Lincoln, Good Night, and Good Luck).

Stream American Pastoral in Digital HD/4K from the AppleTV store. 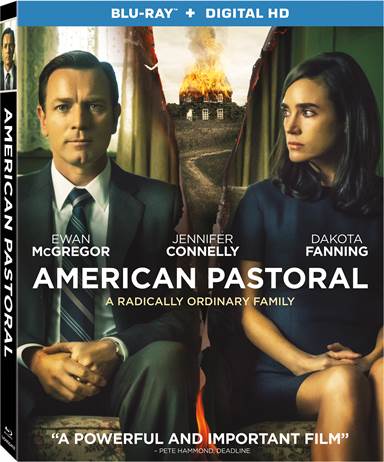 The 1960s were a decade filled with turmoil, protests, war and the end of an era of the working husband, stay at home mom, and the Leave it To Beaver mentality.  Lionsgate brings American novelist Philip Roth's, American Pastoral, to the big screen and with it, brings to light the turmoil that visited many families when trying to keep the wholesomeness of the family unity when one member becomes an outspoken activist.

Swede Levov (Ewan McGregor; Moulin Rouge) is an all American Jewish athlete that excels at everything and goes off to World War II only to return as a hero.  He comes back to claim Miss New Jersey, Dawn, (Jennifer Connolly; A Beautiful Mind) and his high school sweetheart as his bride.   Since Dawn is not Jewish, they decide their child will be able to choose which religion she wants when she gets older.  Whether this is a foreshadowing of the issues they end up having with their only child, Merry (Dakota Fanning; The Twilight Saga) or not, is a question that is left hanging in the air at the end of the movie.  Merry develops a stutter as a child and is taken to a psychiatrist, who tries to tell the Levov's that the stutter is in response to having to compete with the successful father and beauty queen mother, but neither Swede nor Dawn believe that.  Merry becomes very outspoken about her feelings for her mother, her activism for Black Rights, as well as her feelings about the "fascist pigs" that run the government and enforce the laws.  Before they know it, a bomb blows up the local post office, Merry has disappeared, and the FBI believes Merry was the bomber.   While Swede does everything he can to find his daughter, Dawn eventually has a mental breakdown and blames Swede for everything.  Eventually, Swede's determination is his downfall.

Ewan McGregor gives a remarkable performance as a man who has it all but soon finds out what it is to have nothing.  McGregor starts off, like many of the characters he's played previously, as a happy go lucky guy.  He brings a sense of contentment to the role.  He then switches to a tortured soul, trying to keep his family together.  Regardless, it didn't seem like he connected with his character in the middle of the film when he was dealing with his teenage daughter's issues and his wife's mental health issues.

Jennifer Connolly's character is a conundrum.  At one point, she is fighting for love and there is an obvious connection with her character and the audience.  After the first few scenes with the younger Merry, Connolly seems to lose focus on who her character is and what about her character is important.  There is a pivotal point in the film when Dawn has a mental breakdown but it is gone in the blink of an eye.

Hannah Nordberg's (Nicky, Ricky, Dicky & Dawn) performance of twelve-year-old Merry is a high point in the film.  She portrays a stuttering pre-teen girl with such depth and precision that any parent watching the film can understand what the parents are going through.  She seems to be the most "real" character of all and the only one that really makes sense.

Swede's brother, Jerry (Rupert Evans; Hellboy) narrates the story on the eve of Swede's funeral at a high school reunion.  The narration, itself, is an interesting dramatic point in the film, but, when the story is told and why, does not fit into the actual plot.  Jerry's reunion with a childhood friend who seems to be a writer or journalist is moot and he seems to be a lost soul when during the events of the film, he was a successful doctor.

The Blu-ray is presented in 1080p High Definition with a 16x9 widescreen 2.40:1 aspect ratio.  The picture qualities, as well as the colors, were crisp.   Colors seemed as if they belonged to the time periods the movie was portraying.   Audio is presented in English 5.1 DTS-HD Master Audio.  I always find it impressive when I don't have to change the volume to hear the dialogue and American Pastoral's audio fits right into that category.

Besides starring in the film, McGregor also directed it.  Because of the inconsistencies in the performances, it is hard to understand if there was an issue with the direction, the actual actors, or the overall plot. Clearly, McGregor is a multi-talented performer but American Pastoral was more a jumble of life than a clear-cut passage to the end.   In fact, my husband was watching the Blu-ray with me and commented, "that was a boring story about a bomber" and I replied, "It wasn't about the bomber- it was about the father". For that exact example, the film impacts people in different ways, although I have to agree that if it was about the bomber, the plot was weak and undeveloped.  If about the father, it was dramatic and heartbreaking at times and confusing at others.  At best, the storyline provides an interesting topic for almost two hours of viewing but leaves the audience perplexed as to the ending and much of the middle.

Overall, American Pastoral sets out to either tell a story of a young girl who was swept up in the wrong kind of activism or of a story of a father who will never give up on his daughter, no matter what she does.  It's an easy film to watch, as long as you don't have a set idea of what is the main idea.  American Pastoral was an interesting enough story to watch but definitely not McGregor's finest work.