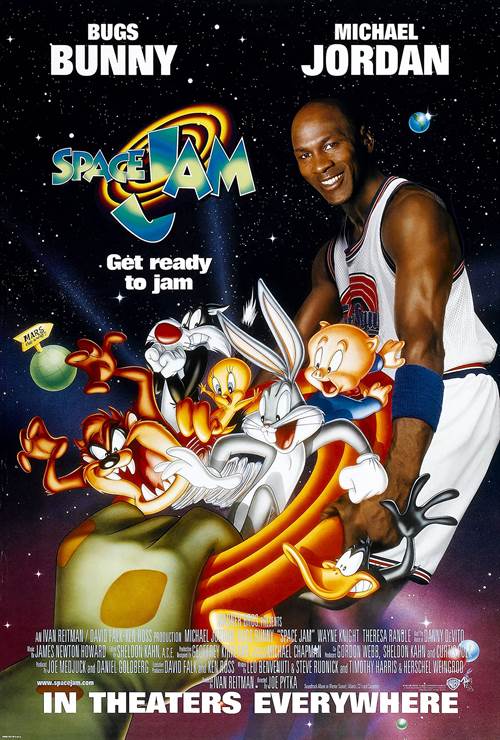 Basketball superstar Michael Jordan and cartoon favorite Bugs Bunny team up with other basketball greats and Looney Tunes characters in this combination animated/live-action feature. Jordan must help the Looney Tunes gang with a basketball game against a group of outer space creatures whose plan, if they win, is to kidnap the Looney Tunes and take them to a failing intergalactic amusement park as the latest attraction. Also starring Academy Award-nominee Bill Murray ("Lost in Translation," "Charlie's Angels") and Wayne Knight (TV's "Seinfeld," "Rat Race"). Gene Shalit says this movie is "for adults, kids, teenagers, women, men, boys, girls, old folks, young folks, Jordan fans, Bill Murray fans, Wayne Knight fans and every Looney Tunes lover who wants to revel in Bugs Bunny and his pals at their looney tuniest."

Download Space Jam in Digital HD/4K from the iTunes store.

Listen to the Space Jam soundtrack on Apple Music. 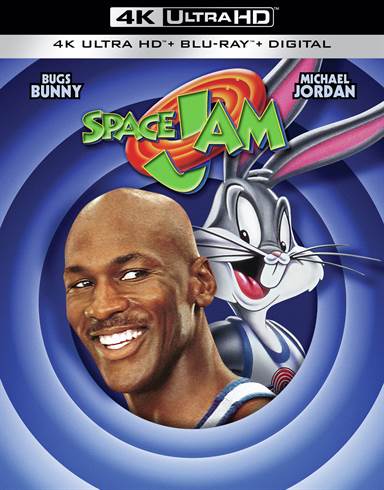 In 1988, Robert Zemeckis (Back to the Future) directed a movie that changed the world of animation called Who Framed Roger Rabbit?  Combining live-action footage with animation was a new concept that stunned and enthralled audiences and critics alike.  Four years later another genre-mixing movie, Cool World, brought a darker and more mature perspective while blending these two mediums together.  Then, in 1996, Warner Bros. Animation made Space Jam; a movie that paired beloved Looney Tunes characters with Basketball and Naismith Memorial Hall of Fame player, Michael Jordan.  With a second film, Space Jam: A New Legacy, heading to movie theaters this month, Warner Bros. decided to release the original Space Jam on 4K UHD; in stores now.

Facing slumping attendance, Moron Mountain owner, Mr. Swackhammer (Danny DeVito; Batman Returns), decides he needs new attractions to lure crowds back to the amusement park.  He sends his minions, the Nerdlucks, to Earth to kidnap the Looney Tunes Characters.  However, once in space, the Looney Tunes gang challenges the puny Nerdlucks to a basketball game.

After the Nerdlucks accept, they return to earth to take the souls of the greatest basketball players alive.  This not only makes the Nerdlucks grow bigger and stronger but also gives them excellent Basketball skills.  While playing golf one day, Jordan is sucked down a proverbial "Wormhole" and ends up in space, along with all the Looney Tunes characters.  The toons beg Jordan to help them win, otherwise, they will end up slaves at Moron Mountain Amusement Park.

The combination of the Looney Tunes vocal talent, some of the best basketball players in the United States at that time, and some well-known Hollywood actors gives the movie a boost.  You would be hard-pressed to find someone who doesn't love Bugs Bunny and Warner Bros. cashed in on his popularity. Sadly, even Bugs can't save this train wreck. Director Joe Pytka (Let It Ride) and Producer Ivan Reitman (Up in the Air) do the best they can with a less than perfect idea and script but with less than stellar results.

Fortunately, as is to be expected, there is a noticeably sharper image with the 4K native 2160p resolution.  The color palette is rich and deep, and the animation is clean and detailed.  However, the movie has an overall softer look and is less grainy in order to blend the live-action and animation components together without them looking entirely out of place.

The Dolby Atmos audio quality is a nice upgrade from the DTS-HD Master 5.1 audio found on the Blu-ray.  There is a fullness that offers a robust score and soundtrack, and the dialogue is crisp.  The ambient noise makes full use of all the surround speakers offering the viewer an immersive experience.

Besides the Digital HD code, the only "new" extra is that the audio commentary has been ported over to the 4K disc.  All other extras are housed on the Blu-ray disc and include Audio Commentary, "Fly Like an Eagle", "Hit 'Em High", "Jammin' with Bugs Bunny and Michael Jordan", and the theatrical trailer.

Space Jam was meant for a specific audience and if you aren't a part of that younger demographic then you won't especially enjoy this film.  Even with the improved video and audio quality, it's difficult to get past the plot, which is mediocre at best.

If you have small children and you remember enjoying this movie back in 1996, then you will want to purchase this 4K version to add to your home entertainment library.  However, I didn't particularly enjoy it so I can't recommend it.

It will also be interesting to see what they do with Space Jam: A New Legacy, out this month.