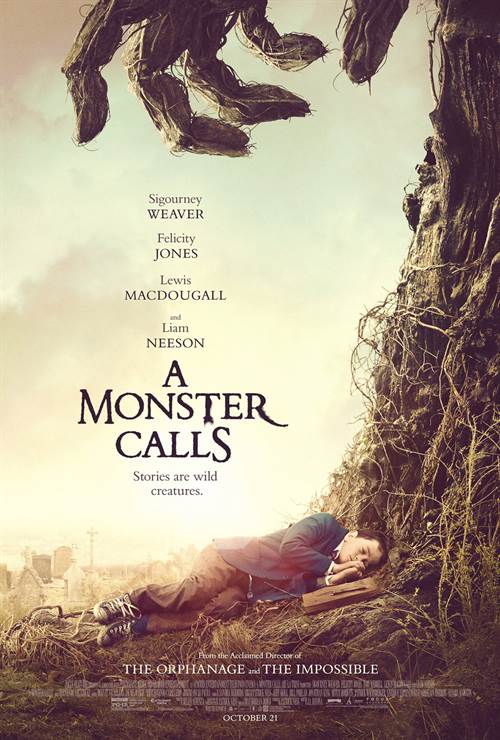 A visually spectacular drama from acclaimed director Juan Antonio Bayona (“The Impossible”), based on the award-winning children’s fantasy novel. 12-year-old Conor (Lewis MacDougall) attempts to deal with his mother’s (Felicity Jones) illness and the bullying of his classmates by escaping into a fantastical world of monsters and fairy tales that explore courage, loss, and faith.

Stream A Monster Calls in Digital HD/4K from the AppleTV store.

A Monster Calls images are © Focus Features. All Rights Reserved. 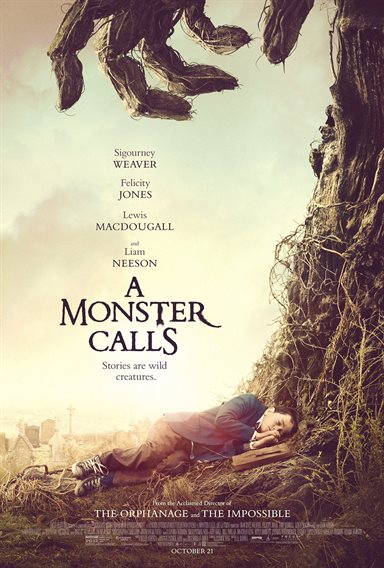 The purpose of a movie is to tell a story and to entertain the audience.  A Monster Calls is the epitome of a story with a deep meaning, one with a lesson, or two, and one with such emotion that there isn't a dry eye left in the theater or a sound emitting from the audience by the time the credits roll.

Conor McGuire (Lewis MacDougal; Pan) is a little boy who takes care of himself.  He does laundry, he makes his breakfast, he gets himself to school- all while his mother sleeps.  At first, the thought is - how can a mother do that?  Then, the screen focuses on her medication and you realize it's out of necessity that Conor takes care of himself.  It's apparent that his mother (Felicity Jones; Rogue One) is dying.

A Monster Calls is the story of a little boy dealing with his emotions of how to find a way to cope with his mother's illness.  He knows she's not getting better, despite her proclamations that the next medication will help, but he's a boy losing his mother.  Conor focuses his attention on an old yew tree growing past the cemetery and seen out of his window.  The yew tree comes to life at 12:07 a.m. as a huge, gnarled tree Monster (Liam Neeson; Schindler's List) telling Conor that he will tell the boy three stories and the fourth will be told by Conor himself, and it will be the truth.  Neeson steals the show as the Monster; it's as if the part was written for Neeson all along.

The storyline of the movie is a little slow-moving at times but the content is deep and thoughtful.  This is a film that the audience will walk out of discussing the meaning of many things, like, who was the Monster?  How does the Monster tie back into Jones' character?  The depth of raw emotion that this story stirs is powerful without being overly dramatic.  The message it delivers is loud and clear without being overpowering and the lessons taught are simple in its message, if not a little tautological in the way the lessons are presented.

A Monster Calls is a fable - a story with a moral or a lesson.  It's also a dramatic fantasy but with a check into reality because of the content.  Sigourney Weaver plays Conor's grandmother and to watch her facade at the beginning of the movie - strong willed, well dressed, makeup on, hair done - progress to a totally different person as she deals with her dying daughter and a grandson she just can't seem to connect with is incredible to watch.  It's only at the end when you see her in one of the final scenes, that it hits you like a brick- of what she's also gone through to get to the end of the story.

Director J. A. Bayona (Penny Dreadful) does a spectacular job of drawing the audience in and keeping their attention where it needs to be.  The imagery of the yew tree as the "monster" and Liam Neeson's adaptation of the "monster" is breathtaking.  Bayona and screenwriter, Patrick Ness, have created such a character that is both a necessary evil to be such an important teacher.

A Monster Calls is a can't miss movie.  It's both devastatingly real and fantastically make believe at the same time.  Despite being a little slow at times, this movie will make you think of everything that life is made up of and give you a renewed interest in living life to its fullest.  This should be a glass half empty movie but the fact is, you'll come out thinking the glass is half full.