The show follows the adventures of lovable oaf PETER GRIFFIN (Seth MacFarlane) and his hilariously odd family of middle-class New Englanders. LOIS (Alex Borstein) is Peter’s loving wife, a former Miss Teen Rhode Island who rules the roost but is one step away from a nervous breakdown. Then there are their kids: frumpy, 16-year-old MEG (Mila Kunis), the family’s punching bag; 13-year-old CHRIS (Seth Green), a kid who can’t make sense of the opposite sex, much less the evil monkey hiding in his closet; and 1-year-old STEWIE (MacFarlane), a diabolically clever baby whose heterosexuality is hanging by a thread. Rounding out the Griffin household is BRIAN (MacFarlane), the family dog, a member of Mensa with a penchant for dry martinis and dumb blondes.

Download Family Guy in Digital HD/4K from the iTunes store. 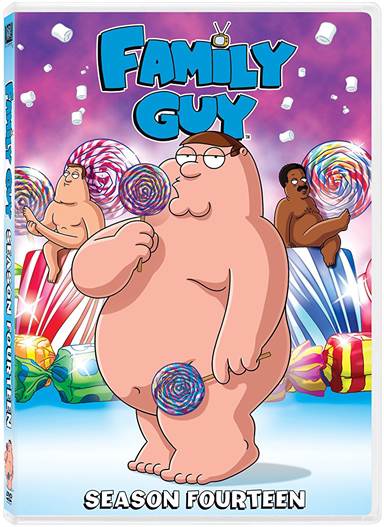 Seth MacFaralane's Family Guy has seen a monumental amount of success. This show, as a whole, is beyond clever and bordering on genius. Some may think that my use of that word is a bit much, but I disagree. The intelligent and funny scripts intertwined with hysterical cutaways are what truly makes this show stand out among other adult-oriented cartoons. Even in its 14th season, this still holds true.  Maybe this show isn't for everyone, but I love it and appreciate the amazing creativity this series showcases.

In this season, we see our regular characters of Peter, Lois, Meg, Chris, Brian, Stewie, Quagmire, Cleveland and Swanson.  We also get some special guests stars including Joe Buck, Kyle Chandler, Glenn Close, Anil Kapoor, Kate McKinnon, John Mellencamp, Ed O'Neill, Liam Payne, Louis Tomlinson, and Neil deGrasse Tyson. And as I've already mentioned they use these guests in such a smart and funny way that it's obvious their guest appearances are well thought out.

Up to their usual hijinks, Peter and the gang delve into some pretty funny plots, like Brian and Stewie becoming addicted to Adderall and the revelation of Quagmire having been a Korean soap opera star while he was in the service. MacFarlane et al keep the writing fresh as always and, after many years, that can't be easy (or is it?). While this season may not be quite as good as some of the earlier seasons, it's still, in my opinion, a top notch show and we see some hope that maybe they are climbing their way back to when each and every episode was a sure hit. In general, this is probably the best season they have had in a few years.

The 14th season includes these episodes:

15. A Lot Going On Upstairs

18. The Adventures Of Old Tom

The DVD presents with three discs, each one with 6-7 episodes, along with Deleted Scenes and Audio Commentary on at least one featured episode.  The third disc also has additional features including a Full Episode Animatic on the "A Lot Going On Upstairs" episode, The Art of Family Guy, and Talking Animals Mash-up. The bonus features are well worth the purchase.

The video is presented in Widescreen 1.78:1 aspect ratio.  The video presentation is clear and the colors as crisp as you see them in the original episodes. The animation does not lag and is not shadowy.   Audio is Dolby Digital 5.1 and sounds brilliant.  You won't have to adjust the volume to hear the dialogue versus music on these Blu-rays.

Family Guy is a great show to watch once you put the kids to sleep.  The episodes are short enough that they don't drag on, and the comedy is just enough to make most adults turn red- just a little. It's everything the world needs- politically incorrect, dysfunctional family- the way we think our lives really are.  Remember, "it's about where you land - not how you get there"  So when you land, make sure that you have Season 14 of Family Guy with you.  After all, there's a reason that Family Guy is in its 15th Season on Fox and that Cartoon Network runs re-runs.

Family Guys airs on the FOX network on Sundays 9/8c.  Get rid of the kids and sit back and laugh with the Griffin family.