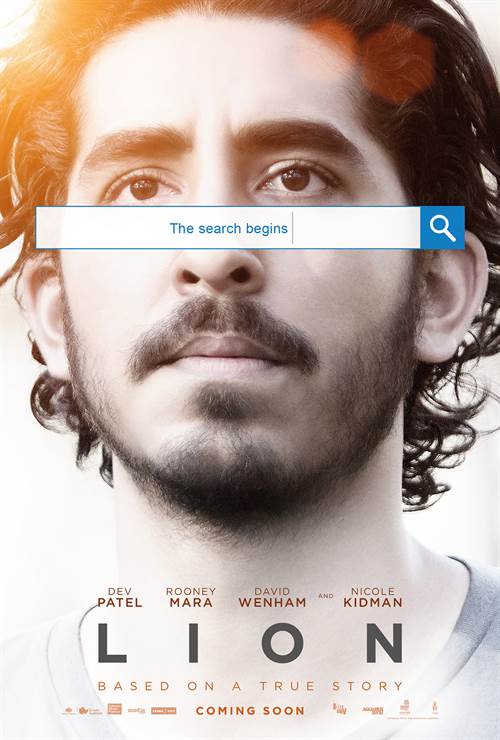 LION follows five-year-old Saroo (Sunny Pawar) who gets lost on a train traveling away from his home and family. Frightened and bewildered, he ends up thousands of miles away, in chaotic Kolkata. Somehow he survives living on the streets, escaping all sorts of terrors and close calls in the process, before ending up in an orphanage that is itself not exactly a safe haven. Eventually Saroo is adopted by an Australian couple (Nicole Kidman and David Wenham), and finds love and security as he grows up in Hobart. As an adult, not wanting to hurt his adoptive parents’ feelings, Saroo (Dev Patel) suppresses his past, his emotional need for reunification and his hope of ever finding his lost mother and brother. But a chance meeting with some fellow Indians reawakens his buried yearning. Armed with only a handful of memories, his unwavering determination, and a revolutionary technology known as Google Earth, Saroo sets out to find his lost family and finally return to his first home.

Download Lion in Digital HD/4K from the iTunes store.

Lion images are © Weinstein Company, The. All Rights Reserved. 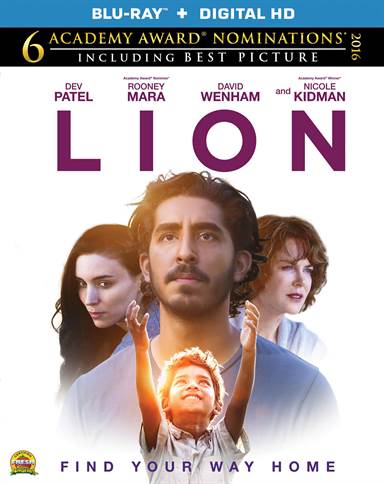 Any parent's nightmare is to lose their child and not know what happened to them.  The uncertainty of their child's fate haunts them until their last breath.  For Kamla (Priyanka Bose; Sold), this nightmare becomes a reality in the movie Lion.  Based on a true story, Lion details the twenty-five year journey of Saroo (Dev Patel; The Newsroom) as he searches to find his way back to his roots.  Out this week on Blu-ray, DVD and Digital Download, it is a powerful story of loss, hope, and renewal.

Saroo is five years old when he goes with his brother Guddu (Abhishek Bharate; Love Sonia) to scavenge for change and trinkets at the train yard near their home.  When he falls asleep on the train, he finds himself locked on a moving train destined for an unfamiliar land.  When the train finally stops, Saroo is 1800 miles from home in Calcutta and unable to communicate because he doesn't speak the language.  He ends up scavenging for food while he survives on the street.

Suddenly, he finds himself in an orphanage and after several months he is adopted and moved to Australia.  He grows up in a loving home with wonderful adoptive parents but always feels a sense loss and longing not knowing where his family is or how to get back to them.  As an adult, Saroo uses every resource he has, including Google Earth, to retrace his five-year-old steps and, after 3 years, he sees familiar images on his computer.  Finally, Saroo heads to India and is reunited with his mother and siblings, giving him a sense of wholeness once again.

While I have always liked Dev Patel as an actor, I have never enjoyed a performance by him more.  His emotional journey throughout this film is superb and I can understand why he was nominated for an Oscar for this role.  Nicole Kidman as Saroo's adoptive mom, Sue, is excellent.  She is soft and gentle but also strong and fragile all at the same time.  Special mention has to be made of the actor playing young Saroo.  Sunny Pawar, in his acting debut, emotes a range of emotions well beyond his tender age.

The Blu-ray is 1080p high definition video with an aspect ratio of 2.35:1.  The quality is sharp and the colors pop, even in the dingy, sandy conditions of India.  The audio quality is excellent and, with the Master Audio 5.1 the dialogue can be heard with terrific clarity.

There aren't a ton of extras on the Blu-ray, but what is included is interesting material.  Besides three deleted scenes, the disc includes an 8 minute narrative by the real Saroo, his search and subsequent reunion of the man and his birth mother.  There are also featurettes about Patel, Kidman, Director Garth Davis, and the music of the film.  All of the extras are enjoyable and offer some insight into this story and the filming process.

While somewhat depressing and sad, the overall feel of the story is uplifting and heartwarming.  Even though I cried at various parts of the movie and at the ending, I have an overall sense of happiness and love when I think back on watching it.  I was told it was a wonderful movie by several people and they couldn't have been more correct.

An amazing story, terrific acting, some well-done directing and several poignant scenes make the film memorable.  If you haven't seen this one yet, you should definitely get it, because the story paired with the cast make this one worthwhile.  If you have a chance, as well, you should look up the true story and the real people behind it.  It makes the film more personable and incredible.