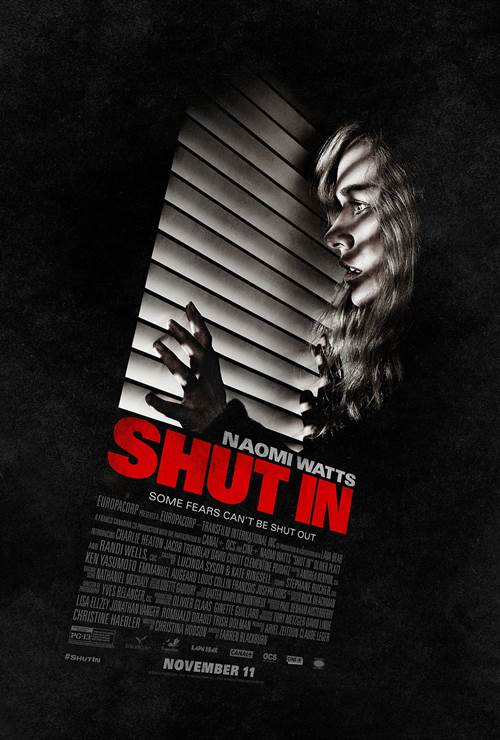 Recently widowed child psychologist Mary Portman (Naomi Watts) lives an isolated existence caring for her bedridden stepson (Charlie Heaton) in rural New England. But when a young boy (Jacob Tremblay) Mary is treating goes missing in a snowstorm and is presumed dead, she becomes convinced that his ghost is haunting her...and soon Mary’s grip on reality turns as slippery as her icy surroundings.

Download Shut In in Digital HD/4K from the iTunes store.

Shut In images are © Europacorp. All Rights Reserved. 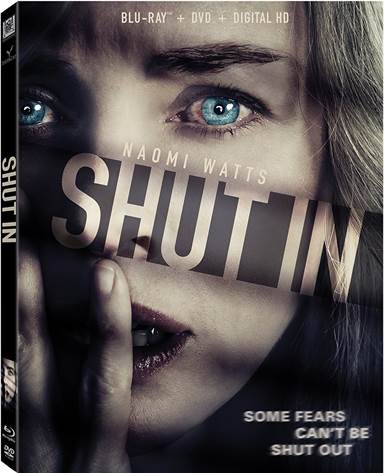 There was a time when horror movies meant scary monsters who preyed on teenagers and created massive amounts of carnage wherever they went.  More recently, though, a lot of these type of horror movies have been replaced with a more suspenseful, psychological thriller-like motif of storytelling that offers a few scares but also plays tricks on your mind.  One of 2016's contributions to this genre is Director Farren Blackburn's (Daredevil) Shut In.  Now on Blu-ray, DVD and Digital Download this month, it brings the suspense we have come to crave from our horror movies.

Mary (Naomi Watts; Mulholland Drive) is a child psychologist who lives with her husband, Richard (Peter Outerbrigde; Designated Survivor) and stepson, Stephen (Charlie Heaton; Stranger Things) in an isolated house in rural Maine.  Having been Stephen's "Mom" since he was 5 years old, she is devastated when she and Richard decided to send him to boarding school after he gets expelled from his high school.  However, while on the way to the new school, they get into a car accident that kills Richard and leaves Stephen in a vegetative state.

As Mary adjusts to her new life as a widow and caregiver, she is saddened to learn that one of her patients - a deaf, foster child named Tom (Jacob Tremblay; Room) is being sent to boarding school, as well, since she felt she could really help him.  When Tom runs away and shows up at her home, Mary takes him in in an effort to help him but his presence and subsequent disappearance triggers unforeseen events making "Shut In" take a twisted turn.  Ultimately, we know Mary survives but the same can't be said for other people in her life.

The cast is fairly strong, which helps the somewhat floundering film.  Watts is certainly believable as the intellectual, professional psychologist, even when she talks about believing she is haunted by Tom's ghost. Heaton's performance as the troubled stepson who lays as an invalid relying on Mary for everything and seems completely unaware of the world around him is powerful.  It can be difficult to portray a severely disabled individual and Heaton does it well.  Tremblay is a force to be reckoned with at such a young age, offering powerful performances in not only 2015's Room but in this film, as well, as the deaf foster child.  I was also thrilled to see Oliver Platt as part of this cast, as I really enjoy his work and this movie was no exception.

Unfortunately, despite an interesting and different story idea, there is just something missing in the film that I'm not sure I can put my finger on.  There aren't many "scares" per se, which is disappointing for a horror film, and once the twist happens there is so much time spent on the chase that it ends somewhat unsatisfyingly and uneventfully.  Also, the twist comes into the movie about an hour in, leaving a half hour of a cat and mouse game that, frankly, gets a little boring after a while. The scenery is beautiful, though, and lends itself nicely to a classic suspense thriller film.

The Combo pack offers the Blu-ray, DVD and Digital download with the former being the best offering for quality video and audio.  The 1080phigh definition video has an aspect ratio of 2.39:1 and has crisp visuals, especially the super whites of the snow during the day and the shades of black during the creepiest scenes at night.  The audio track is well done and is in DTS-HD Master 5.1 quality. Each creak, bump and deep breathing is heard with clarity and clearness.

There are only three extras on the Blu-ray and one is the theatrical trailer.  The other two are "Nightmare v. Reality: Imagining Shut In", a seven-minute look behind the scenes with cast and crew interviews, and The House on Delphi Lane: A Classic, that is a four-minute look at the house used for exterior scenes, as well as how interiors were created from several different homes and is the most interesting and insightful view of production design I've watched recently.

For all its flaws, if you like thrillers and need a distraction to go along with some popcorn on a cold and rainy night, Shut In is a viable option.  Just make sure you keep a flashlight handy for those unusual and unexpected noises you may hear.