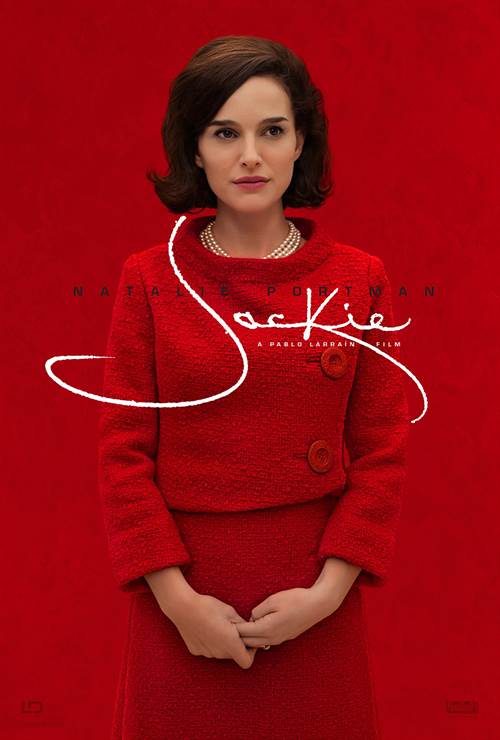 JACKIE is a searing and intimate portrait of one of the most important and tragic moments in American history, seen through the eyes of the iconic First Lady, then Jacqueline Bouvier Kennedy (Natalie Portman). JACKIE places us in her world during the days immediately following her husband's assassination. Known for her extraordinary dignity and poise, here we see a psychological portrait of the First Lady as she struggles to maintain her husband's legacy and the world of "Camelot" that they created and loved so well.

Stream Jackie in Digital HD/4K from the AppleTV store. 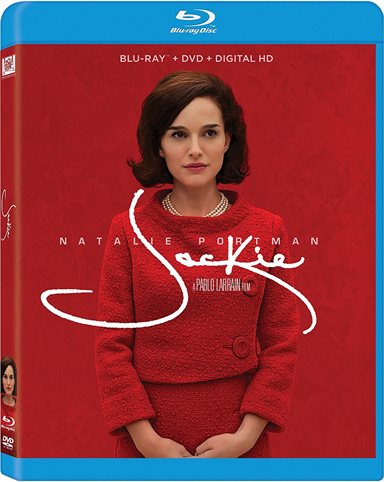 In the 1960s, the United States was introduced to Camelot. Camelot – a time of romance and prosperity. The time in which there was contentment throughout the kingdom and people were happy. Well, we, as Americans, didn't have King Arthur, Queen Guinevere, or The Knights of the Round Table; we had the White House, the Oval Office, and the Kennedy's.  In fact, there have been many stories told about the Kennedy's. The stories have been about the romance between Jack and Jackie and Jack and all the other women.  There have been stories about the assassination of President Kennedy and there have been stories about Jack's rise to the White House. What really hasn't been done before is a biopic about Jacqueline Bouvier Kennedy documenting how she survived the death of her husband as a dignified woman that she presented to the American people.  Twentieth Century Fox has tackled this topic and brought humanity and courage the story of Mrs. Kennedy, told from a perspective never before done in films.

Natalie Portman (Black Swan) portrays Jackie with dignity and character. It gives us insight what Jackie Kennedy's life was like in the week following her husband's assassination. She has to make hard and fast decisions about the funeral and the best way to honor her husband, yet these decisions are portrayed being made in a careful and thought out manner. It's hard to believe that this would be an accurate portrayal of a woman going through what Jackie Kennedy must have gone through that week. Yet, the American people of that time saw Jackie Kennedy as someone who was the Mother of the Country and therefore she must have had to act with grace in all her decisions. Portman portrays this beautifully and accurately.  Her interactions with the actor who portrays Robert Kennedy, Peter Sarsgaard (The Magnificent Seven) are calculated, yet emotional. It is if Portman only really opens up when Sarsgaard is in the room.

Sarsgaard's portrayal of Robert Kennedy superb. He is guarded and in control as much as a Kennedy is supposed to be. The confusion is that there is no grief, no raw emotion in the portrayal of Robert Kennedy during the week after his brother's assassination. Even when dealing with his family, there seems to be a disconnect between what the real emotions in this situation should be, but no one really knows what was going through Robert's head in that most important week as he helped plan his brother's funeral. One can only wonder if the control that Sarsgaard exhibits is actually what happened or if the portrayal is an actor and/or director interpretation.

Pablo Larrain was nominated for Best Director for his direction of this film and it is well deserved.  The flashbacks he created and the chopping up of the timeline as he tells the story of Jackie Kennedy is pure genius. He delves into the deep emotions of her persona and what she must have been thinking throughout that week – having her husband murdered in front of her, having to plan his funeral, and having to move out of her home all within an extremely short period of time.  While Larrain has Jackie telling her story to a writer, the real story behind this is when Jackie speaks to the priest and finally confesses to why she's done what she's done.

Portman and Sarsgaard steal the show. Their acting is impeccable and their on-screen chemistry in their interactions with each other is telling. My only issue is that you can't really get to know Jackie Kennedy in this film.  The emotional connection between the character and the audience seems to be missing because of the extreme control that is portrayed in her character. Maybe this is part of the genius that Larrain teaches us while watching his film but there are still some disconnects between the audience and the characters. The portrayal of Camelot isn't always clear to the audience and the happiness that is supposed to define Camelot is clearly missing from Jackie's story.

A definite honorable mention for his acting is John Hurt (Doctor Who: The War Doctor).   We recently lost Hurt and, therefore, his performance as the priest who hears Jackie's confession is heartwarming.  There are times where he doesn't even seem to be listening to what Jackie has to say, yet, at other times, what she says are profound statements of wisdom. He seems to be almost the father figure in the film.

The Blu-ray is presented in High Definition 1080p video.  The picture quality is sharp and the color scheme is clearly from the 1960's.   Madeline Fontaine, the costume designer, went to great lengths to ensure that the colors of Jackie's clothes were accurate and the palette seems true to the era. Since Jackie was known for her manner of dress, the sharpness and accuracy of the color that's portrayed through the screen is of utmost importance and makes a significant positive impact on the overall storyline.

A reason to invest in the Blu-ray is always - of course - for the bonus features.  Jackie, however only has a few of these.  Bonus features include the theatrical trailer, gallery of still photos and a twenty-two-minute segment entitled From Jackie to Camelot that includes interviews with the cast and crew.

Jackie is a wonderful biopic told from a very different point of view, and it's a view which is as different as we've ever seen the Kennedy world presented.  In fact, the movie begs a very simple question – was President Kennedy our Camelot or was Camelot always just Jackie? 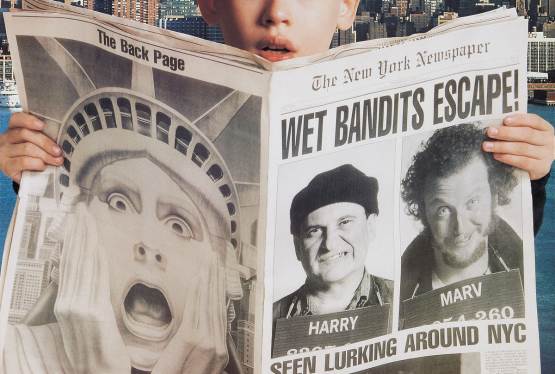