Gold is the epic tale of one man’s pursuit of the American dream — to discover gold. Oscar® winner Matthew McConaughey stars as Kenny Wells, a prospector desperate for a lucky break, who teams up with a similarly eager geologist, and they set off on an amazing journey to find gold in the uncharted jungle of Indonesia. Getting the gold was hard, but keeping it would be even harder, sparking an adventure through the most powerful boardrooms of Wall Street. The film is inspired by a true story.

Download Gold in Digital HD/4K from the iTunes store.

Gold images are © Weinstein Company, The. All Rights Reserved. 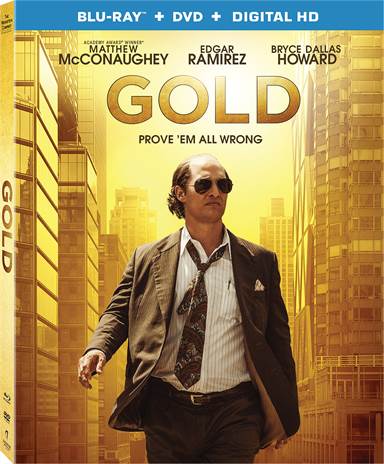 In 1995, Bre-X, a Canadian mining company announced to the world they had found significant gold deposits in Busang, Indonesia.  Overnight, they became a huge success and their penny stock suddenly was worth significantly more money per share.  However, by 1997, everything fell apart when independent consultants couldn't replicate the finding and the world discovered the whole operation had been a scam.  Though the names have been changed, the 2016 film Gold closely resembles the events of one of the biggest Canadian stock markets scandals in history.